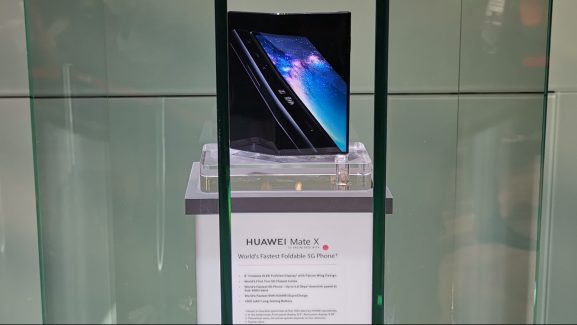 Huawei originally expected its folding smartphone-tablet hybrid, Mate X, to ship in June but pushed the launch date back to September to accomodate “extra” tests. Now the 5G phone is being delayed again, with a release promised by the end of 2019, potentially — but not certainly — in November.

Mate X was the star of a glitzy Huawei event back in February, when it was touted as the “world’s fastest foldable 5G phone” — a jab at Samsung’s Galaxy Fold. The company suggested the device’s 8-inch diagonal unfolded display could be used to enhance a user’s on-the-go video viewing experience, while a 6.6-inch smartphone-style screen could be used for everyday apps, phone calls, and the like.

But after the Galaxy Fold was delayed over hinge- and screen-related engineering issues, Huawei similarly paused the Mate X, ostensibly to make sure apps would be able to handle the transition between the smaller and larger displays. According to TechRadar, the second delay appears attributable to recent hardware changes, including improvements to the device’s screen hinge and a slimmer lock button, though key elements — a plastic screen cover and steel back — have remained unchanged. Consequently, Huawei is now ruling out a September launch completely.

Given the Mate X’s $2,600 price tag, it’s hard to imagine too many people were anxiously awaiting its release. At one point, the device was expected to be the company’s first 5G smartphone, only to be beaten to market by the Mate 20 X 5G. And there’s no chance the expensive foldable will be future-proof: Huawei is already talking about a sequel with even more screens, though it has not offered a release date, which is probably for the best at this point.