By some estimates, a whopping 40% of ecommerce revenue comes from repeat purchasers. (Streaming music subscriptions alone generated $19.1 billion in 2018.) Be that as it may, only 32% of online bills are made on a recurring basis, while the remaining 68% are made as one-time payments.

The roadblocks standing in the way of profitable subscription businesses drove KP Saravanan, Krish Subramanian, Rajaraman Santhanam, and Thiyagarajan T. to cofound Chargebee, a San Francisco, California-based provider of subscription management and recurring billing tech. Over eight years later, investors are rallying around the idea, particularly now that the company counts 1,800 brands in 53 countries among its customers.

Chargebee revealed today that it has raised $14 million in a series D round led by Steadview Capital, bringing its total raised to date to $38.2 million, including an $18 million series C in March 2018. CEO Subramanian said the proceeds will bolster ongoing product development and partner outreach efforts, following the opening of the startup’s new office in Europe.

“Enterprises and rising startups recognize the value of subscription businesses. Unlike transactional revenue models, subscriptions require companies to evaluate longer-term metrics and redefine KPIs for success,” he added. “This new investment will [enable us] to build an end-to-end solution that provides revenue operations teams with deeper insight into their core business metrics.” 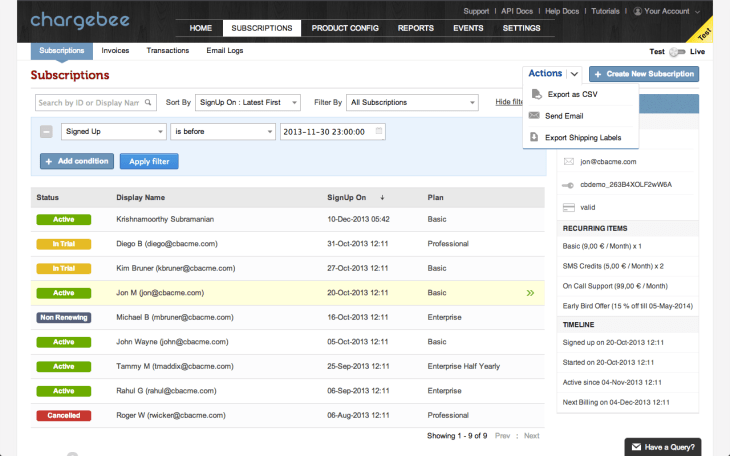 Chargebee’s eponymous platform automates things like funneling users toward paid plans and collecting payment information, as well as executing upgrade or downgrade billing adjustments and facilitating subscription renewals. For tasks it can’t handle automatically, it recruits the help of human agents through customer relationship management dashboards from Zendesk, Salesforce, and Netsuite, while guiding customers through a customizable zero-code checkout.

Thanks to bespoke integrations with payment platforms like Stripe, Braintree, WorldPay, and PayPal, customers can pay using digital wallets like Amazon Pay and Apple Pay; with credit or debit cards; or directly with their bank accounts. Chargebee supports over 480 recurring billing use cases, more than 23 payment gateways across over 53 countries, and upwards of 120 currencies and payment methods, along with dozens of languages.

The company boasts a range of pricing schemes, including variable and usage-based pricing, and it’s able to renew billing cycles based on sign-up dates or other specific dates. It can also selectively route payments and currencies adherent to predefined rules. The platform’s optional Smart Dunning feature algorithmically susses out retry logic across days and times for failed payments. On the security side of the equation, it implements two-factor authentication, in addition to SAML-based single sign-on.

On Chargebee’s backend, managers get a visual customer organizational chart, from which they’re able to define payment and invoicing responsibilities. They’re also afforded access to templatized reports and KPI dashboards with metrics such as subscription revenue, discount, bad debt, and add-on metrics, all of which feed into accounting platforms like Netsuite, Intacct, and Xero. Teams receive real-time notifications if any tracked goals meet or exceed expectations, or if the team is in danger of falling behind.