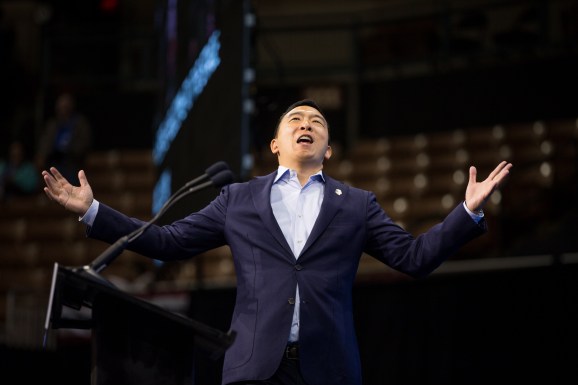 Democratic presidential candidate Andrew Yang took to the stage Thursday with a big surprise: His campaign wants to give $1,000 a month to 10 U.S. citizens for one year, a very public $120,000 trial balloon for his universal basic income proposal.

As one of the most successful self-described entrepreneurs to throw his hat in the presidential ring in recent history, Yang has launched a phenom candidacy that must be understood.

Before the start of his campaign, you’d probably never heard of him. The startup investor and founder of entrepreneur education nonprofit Venture for America has zero political experience, yet he made it into the running for the top 10 Democratic presidential candidates and commanded attention on a stage with frontrunners like former Vice President Joe Biden, and Senators Elizabeth Warren (D-MA) and Bernie Sanders (I-VT).

A Real Clear Politics average of popular polls puts him at 3%, making him the sixth-most popular Democratic presidential candidate.

I can appreciate his appeal. He’s a charming guy who speaks in plain terms about the state of the nation. He also isn’t bad at throwing down on the piano and was seen crowdsurfing earlier this week.

On Thursday, he did a pretty good job of addressing a range of topics, like health care, Chinese tariffs, campaign finance reform, and why he’s qualified to serve as commander-in-chief of the U.S. armed forces.

But the center of Yang’s candidacy is his simple-to-understand plan to address automation and his assertion that Donald Trump is president today because 4 million jobs were automated out of Democratic strongholds in the Midwestern United States.

In an interview with VentureBeat in May, Yang exhibited a strong understanding of AI, from his thoughts on Trump’s American AI initiative to his concerns about job loss and plans to prevent an AI arms race with China.

That Yang’s message is resonating should come as no surprise: Pew Research Center and Gallup surveys in 2017 and 2018, respectively, found a majority of U.S. adults are worried about automation taking jobs. A 2017 Pew Research poll also found that Democratic-leaning voters are nearly twice as likely (65% to 34%) to expect the government to step in and help people when computers and robots put them out of work.

A plan to give every adult in the country $1,000 has probably helped boost name recognition and his position in the polls, but Yang talks about universal basic income not as a handout, but as an investment in family, community, and the average American, recognition that “you can solve your own problems better than any politician.”

“We have to see ourselves as the owners and shareholders of this democracy rather than inputs into a giant machine,” Yang said onstage Thursday. He was responding to a question from moderators about campaign finance reform, but that same outlook could just as easily describe his approach to automation.

And his strategy now appears to be two-pronged: Rage against the machines and emphasize humanity.

“I’ve found that the more I lean into what makes me human, the more people respond,” he told NBC News in a story published earlier this week. “This campaign has been on some level an exploration of my own humanity.”

That human-centered approach was evident in his responses to questions Thursday about immigration and education.

When asked about his views on charter schools and education, Yang asserted that investments in neighborhoods and families are needed to improve children’s lives and lift school performance.

When asked if he would raise legal immigration levels to 2 million people a year, Yang cited data like the fact that immigrants start more businesses than native born U.S. residents and that nearly half of all Fortune 500 companies today were created by immigrants or the children of immigrants. He also talked about being the son of a peanut farmer born in Taiwan and how the U.S. “has been a magnet for human capital for generations.”

“If we lose that, we lose something integral to our continued success. And that is where I would lead as president,” he said.

In his closing remarks Thursday, Yang talked in relatable terms about losing hundreds of thousands of dollars as a businessperson and his own slow road to recovery and success.

“The goal of my campaign is to make this an economy that allows us to live our human values and aspirations,” Yang said in his final remarks.

It doesn’t seem likely Yang will become the Democratic Party’s nominee, but his insistence that drastic measures are necessary to address automation is resonating.

Earlier this year, The Verge called Yang “a candidate for the end of the world.” A better way to put it might be that he’s a candidate who takes the impact of automation extremely seriously and who talks about its role in society in relatable terms.

When the Yang campaign comes to an end, the Democratic front runner probably won’t propose a $1,000 universal basic income plan, but like former Ohio Senator Sherrod Brown’s focus on the “dignity of work,” portions of Yang’s platform will likely be adopted. Because Yang is talking about the reality of the modern economy and continued proliferation of AI, any politician — Democratic or otherwise — who wants to win over voters will need to do the same.