Drones — specifically quadcopters — are a versatile bunch. They’ve been used to inspect gas terminals, oil rigs, and turbines for wear and tear by startups like Sterblue, Clobotics, General Electric spinoff Avitas Systems, and Cyberhawk. French firefighters tapped them to survey Notre Dame during the recent blaze. And San Francisco-based Matternet is collaborating with UPS to launch an aerial medical specimen delivery service in Raleigh, North Carolina.

But a team at the University of Michigan’s Department of Aerospace Engineering might be the first to retrofit drones for autonomous roofing. In a paper published on the preprint server Arxiv.org, they describe a DJI S1000 octocopter outfitted with an off-the-shelf nailgun that could be adjusted to match the angle of roof slopes. They report that in preliminary tests, their airborne roofer managed to nail within a three-centimeter gap (just below the sealing strip and above the exposure cutouts) on target shingles.

The paper’s coauthors say they chose the S1000 for its high payload limit (the takeoff weight including the nailgun assembly worked out to 9.25 kilograms) and long flight time (10 minutes with the aforementioned assembly), and for its robust suite of open source development tools. As for the nailgun, they selected a tetherless model — the RYOBI AirStrike — whose buttons could be triggered by an onboard electronic relay circuit, such that software triggered the relay at the press of a limit switch. 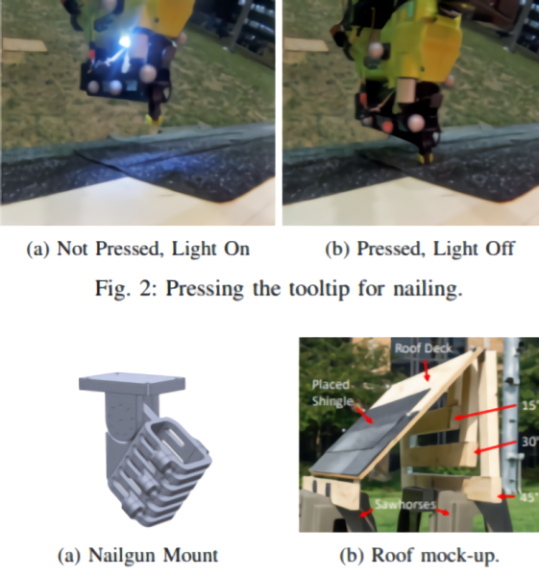 The team reports that they piloted the drone using a modified version of Ardupilot, an open source autopilot suite compatible with a range of aircraft. It ran on an embedded single-board Linux computer, while a controller tracked a predetermined flight trajectory using motion capture feedback in M-Air, the University of Michigan’s outdoor netted flight facility.

To prove out their approach, the researchers built a roof mock-up consisting of 3/4″, 5-layer plywood connected with hinges to three different stands with heights supporting a maximum roof slope angle of 45 degrees. During testing, it sat on two sawhorses with four sandbags keeping them stable.

Driving a nail required that the drone anchor the nailgun’s tooltip to the nailing point while maintaining sufficient compression force until it fired, the team noted. This wasn’t possible in every scenario — at 45 degrees, the S1000’s propellers came too close to the mock roof and the lack of friction caused the tooltip to slip. But attempts over the span of 16 experiments at 0, 15, and 30 degrees were generally more successful. 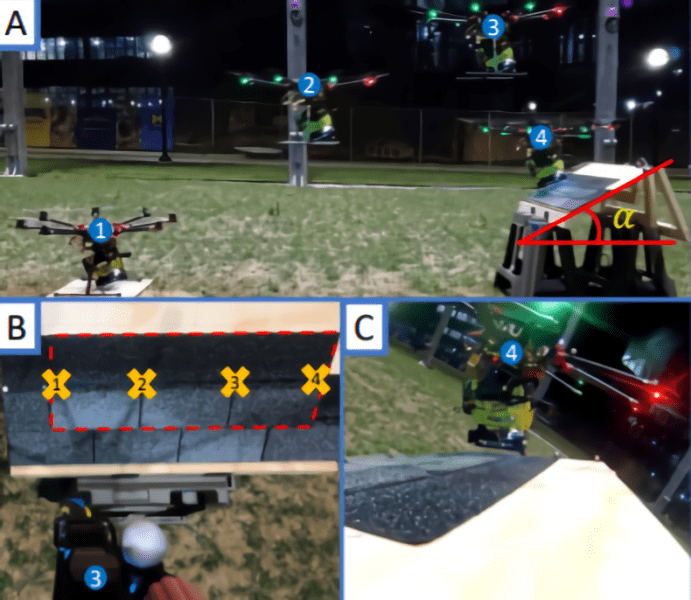 The researchers note that there’s work to be done — they plan to replace the onboard sensing with a system that recognizes shingle outlines and to upgrade the nailgun to a tethered pneumatic unit. But they point out that they achieved hands-free “roofing success” even at different slope angles, an ostensible first for a drone roofer.

They’d be wise to tread lightly, though, considering the current discourse. Not that long ago, UAVs were weaponized in an assassination attempt on Nicolás Maduro, the president of Venezuela. That in part prompted the Federal Aviation Administration to explicitly ban the piloting of drones equipped or armed with a “dangerous items,” with violators facing a $25,000 fine.