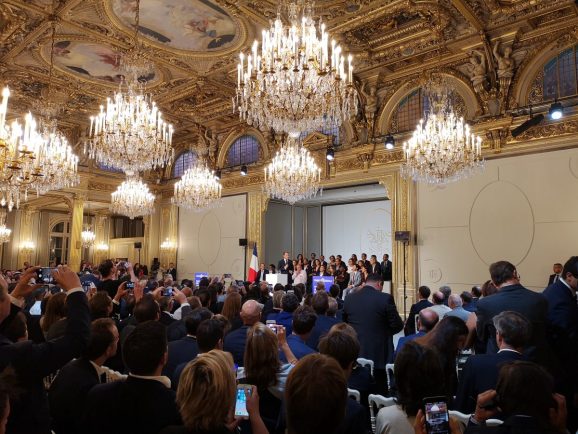 The global startup race is often measured by quantitative markers, like venture capital or unicorns. But the more intangible measure of sovereignty is increasingly on the minds of policy makers outside the U.S. and China.

These tech superpowers’ growing might is provoking global anxiety but also being used as a rallying cry, as seen last week in France, where the government is stepping up efforts to ensure its digital independence.

“The battle we’re fighting is one of sovereignty,” said French president Emmanuel Macron. “If we don’t build our own champions in all new areas — digital, artificial intelligence — our choices … will be dictated by others.”

Macron was speaking at a reception of the country’s tech leaders on the eve of the France Digitale Day conference. And while the focus was on France, anxiety over losing independence in the digital realm is widely shared across Europe.

While concerns are partly economic, there is a cultural component, a fear that the everyone-for-themselves ethos of the U.S. or the authoritarian centralization of China will be imposed via the design and accessibility of critical technologies and expanding automation.

Urgency is increasing with the accelerated development of transformative technologies, such as artificial intelligence and self-driving vehicles. And the fundamental dilemma isn’t easy to resolve: How can countries protect themselves from the sweeping disruption caused by revolutionary advances while also leveraging their power to create economic and social opportunity?

A threat to sovereignty was one of the fears recently raised by France’s economic minister Bruno Le Maire when he declared that he would move to block Facebook’s Libra cryptocurrency project in Europe.

While the country has taken steps to embrace blockchain and loosen the rules around cryptocurrency, part of the currency’s appeal is its apparent ability to evade control by any single entity or country. In the case of Libra, the involvement of a tech giant like Facebook makes the offering automatically suspect in the eyes of many European policymakers.

“I want to be absolutely clear: In these conditions, we cannot authorize the development of Libra on European soil,” Le Maire said. “The monetary sovereignty of the (European) states is in play.”

In France, this sentiment has been particularly visible when it comes to the question of artificial intelligence. In April 2018, the country unveiled its national AI strategy to alert citizens to the threat of Chinese and U.S. dominance.

The document contained a number of measures designed to encourage more research and startups. But it also took a philosophical stand by trying to separate the collection of data from the development of AI. Tech giants’ consumer-facing services are hoovering up personal data in order to advance machine learning and fine-tune AI algorithms. But in the process of trying to claim this digital treasure, many of these companies have increasingly come under fire for privacy abuses.

France wants to separate data collection from AI development by making more anonymized public data available in a centralized pool that would be accessible to all. In a nutshell, the government does not want to watch the data of its citizens and business sucked up into the cloud and used elsewhere.

“For France and the European Union, data policy [that] matches the requirements of artificial intelligence therefore needs to be structured around the goals of sovereignty and strategic autonomy,” reads the report outlining the new strategy. “At the outset, it should be stated that this balance is fragile, and this objective requires vision. It is, nonetheless, a prerequisite for the development of artificial intelligence in France and in Europe so that they can avoid becoming just ‘digital colonies’ of the Chinese and American giants.”

While that was a start, Macron wants French startups to go further and faster.

Last week, he announced a fund worth $5.5 billion that will be pumped into the startup ecosystem. This includes $2.2 billion for French venture funds to allow them to join bigger rounds for later-stage companies, one of the country’s biggest roadblocks at the moment.

Typically, when a French startup begins looking for funding after its series A, it tends to drift overseas, where the checkbooks are bigger. While this trend seems to be shifting, speeding up that evolution has become an urgent concern.

Managers of asset funds with experience backing companies approaching their IPO will be in charge of directly investing the balance of the fund.

Critically, the fund does not comprise tax money. Rather, Macron has convinced a range of insurance companies and asset managers to contribute. In the U.S., the huge pools of public pensions at the state level represent a major advantage for venture funds looking to raise money. Unlocking such funds in France and Europe would provide a significant bump to the amount of capital available.

“The capital battle is essential,” Macron said. “If we want to win this battle, we have to succeed at raising more capital.”

As part of this push, state bank BPIFrance and La French Tech, the agency that oversees support and promotion of French startups, announced a list called “The Next 40.” The goal is to shine a light on the country’s fastest-growing startups to catch the attention of oversees investors while also helping them navigate France’s notoriously labyrinthine bureaucracy. Macron wants the country to have 25 unicorns by 2025.

Unemployment has gradually fall under Macron, but opportunities for younger people still seem scarce, sending many of the most talented elsewhere.

“In the United States, tech companies create between one-third and half of new jobs,” Macron said. “The 40 most promising startups in France are going to create at least 7,000 jobs in the coming months, 25,000 by all startups.”

He hopes the impact of this growth will trickle down to other economic sectors. But in calling on startups to go “faster, stronger, higher,” Macron also cited the country’s broader desire to chart its own digital future, saying: “I don’t want to be dependent on others for the big choices in technology.”