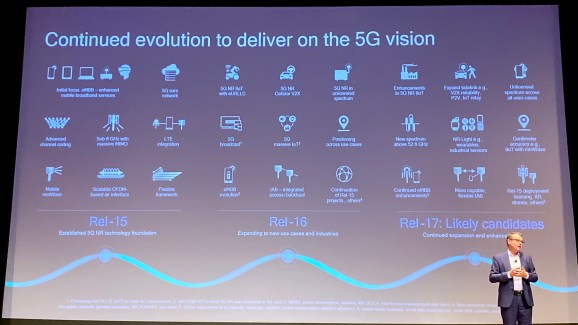 Qualcomm's John Smee spotlights many of the new technologies that will come to 5G over the next five years.

Qualcomm executives and engineering teams offered countless details at a day-long “Future of 5G” event yesterday, but there was one overarching theme: As the first year of 5G comes to an end, the second year will be all about expansion, and exciting plans are already in place for the following few years. In other words, buckle up.

Without miring you in the heaviest technical details, here are 10 of the key trends you can expect over the first five years of commercial 5G. 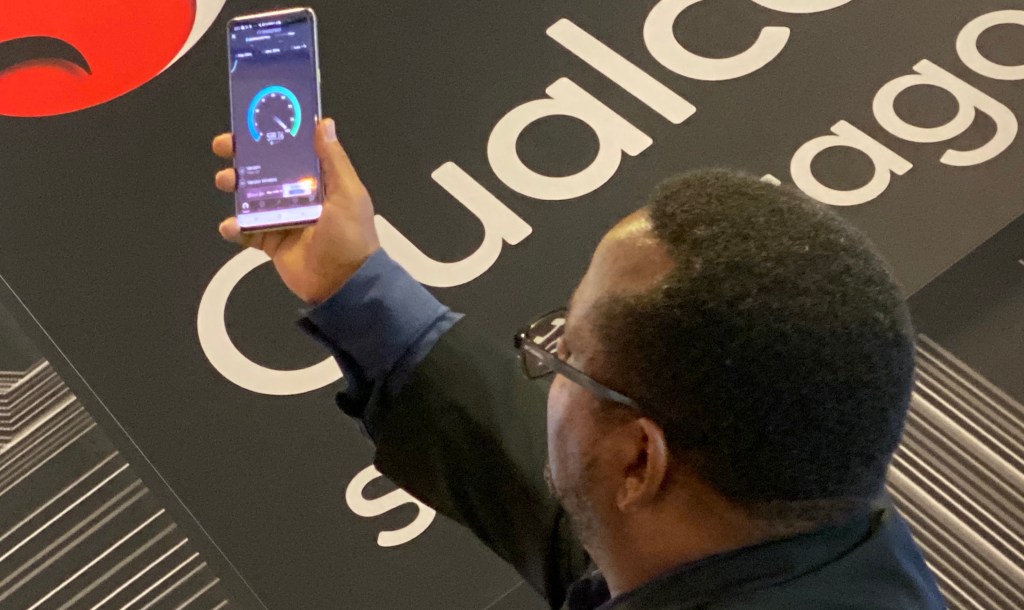 In the short term, Qualcomm, carriers, and device makers will be working together to improve the reliability of 5G connectivity, ironing out software kinks that have made some devices fall back to 4G networks rather than smoothly moving from 5G tower to 5G tower. The company is also aggressively working to dispel the myth that millimeter wave (mmWave) 5G only works in a line of sight from a small cell tower, showing live demos of a Samsung Galaxy S10 5G receiving data at 1.1Gbps despite being in a separate room located physically behind a mmWave antenna.

Going forward, 5G performance is only going to become more impressive. Current-generation Qualcomm chips are already promising up to 7.5Gbps speeds with optimally configured networks, but in subsequent updates to the 5G standard, the company expects industry support for denser data encoding, even larger numbers of antennas, and multi-SIM connectivity. 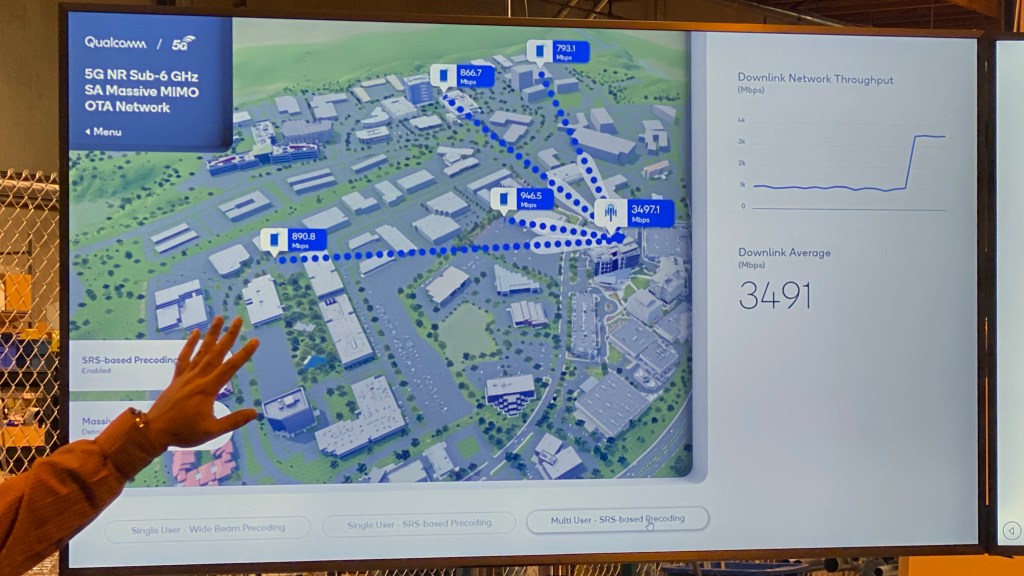 As mentioned in our prior coverage of the company’s Project Pentari, Qualcomm is also developing sub-6GHz cellular tower hardware with grids of beam-forming antennas. The antennas can precisely locate users and target signals at them, enabling each user to achieve super-high data rates rather than enjoying a small fragment of the tower hardware’s total throughput. 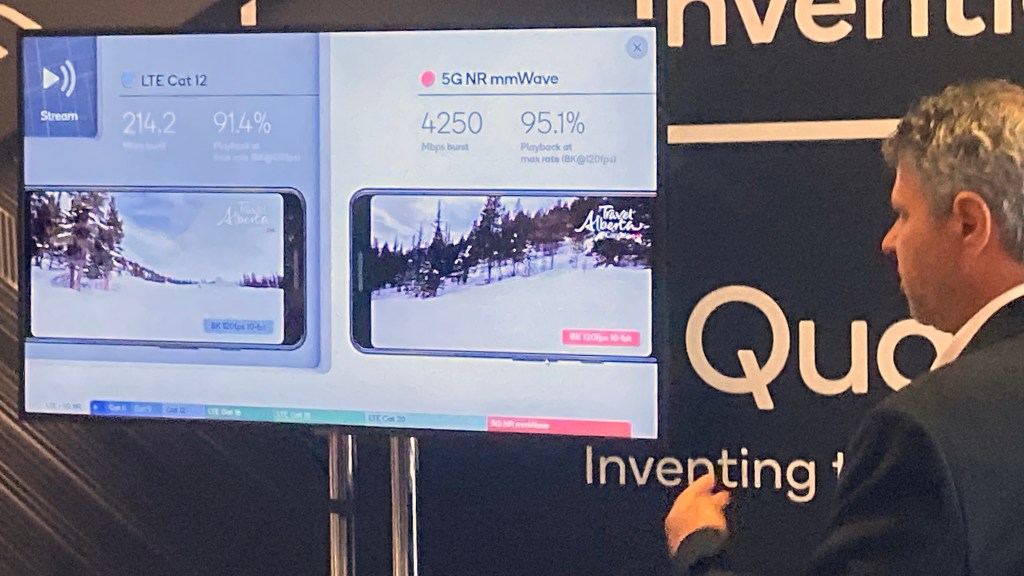 Another “sooner rather than later” development will be the use of 5G to deliver high-bandwidth video services — both for broadcasts and bi-directional communications. Thanks to the high bandwidth offered by 5G, some carriers will likely begin to transmit 8K videos at standard (30fps) frame rates over the next year, with ultra-wideband mmWave 5G thereafter enabling up to 120fps 8K videos with 10-bit color in the future.

Advanced cloud game and app streaming will also be possible in the very near future, beginning with reliably sub-16-millisecond lag for 4K streaming at 60 frames per second — enough to deliver an excellent gaming experience. The consistently smooth, high-definition video will enable developers to stream content to users without risking the security of the underlying code or assets, while delivering user experiences that will feel like natively installed apps. 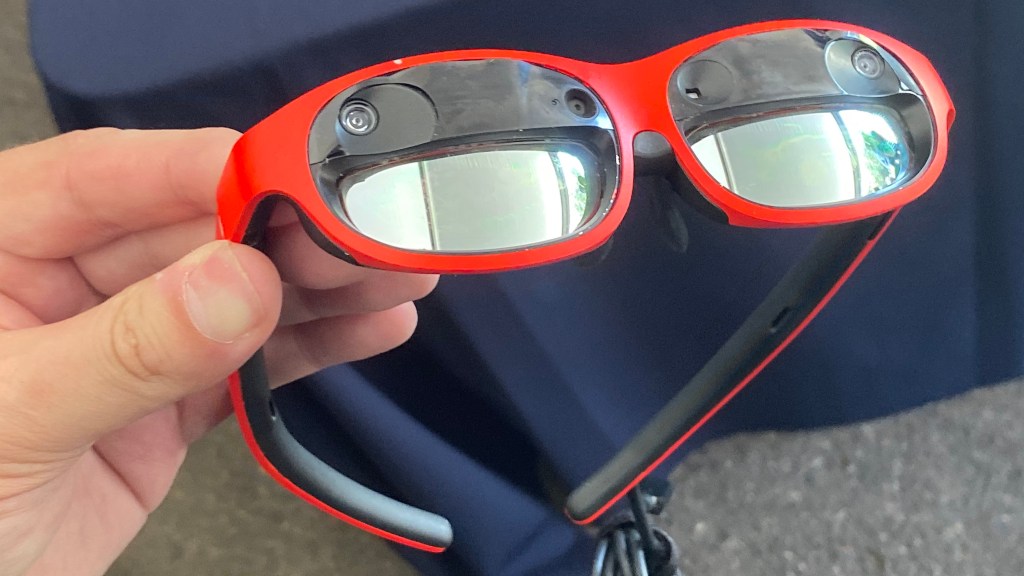 Don’t hold your breath for 5G wearables in the immediate future, but they’re coming, Qualcomm suggests. A future release of the 5G standard, release 17, is likely to include support for 5G NR-Light, which will take a third step forward in reducing 5G’s power consumption so that the chips can work in tiny wearables and long-running sensors.

Apart from standard chip manufacturing advances that are expected over the next two years, cutting power requirements for ever-smaller chips, the 5G standard will likely add a technique to wake a sleeping modem to receive data — a way to keep the modem from idling and consuming power. 5G NR-Light could also include other optimizations for the comparatively small data needs of IoT sensors and wrist-worn wearables, neither of which may need to stream massive quantities of data … or will they? 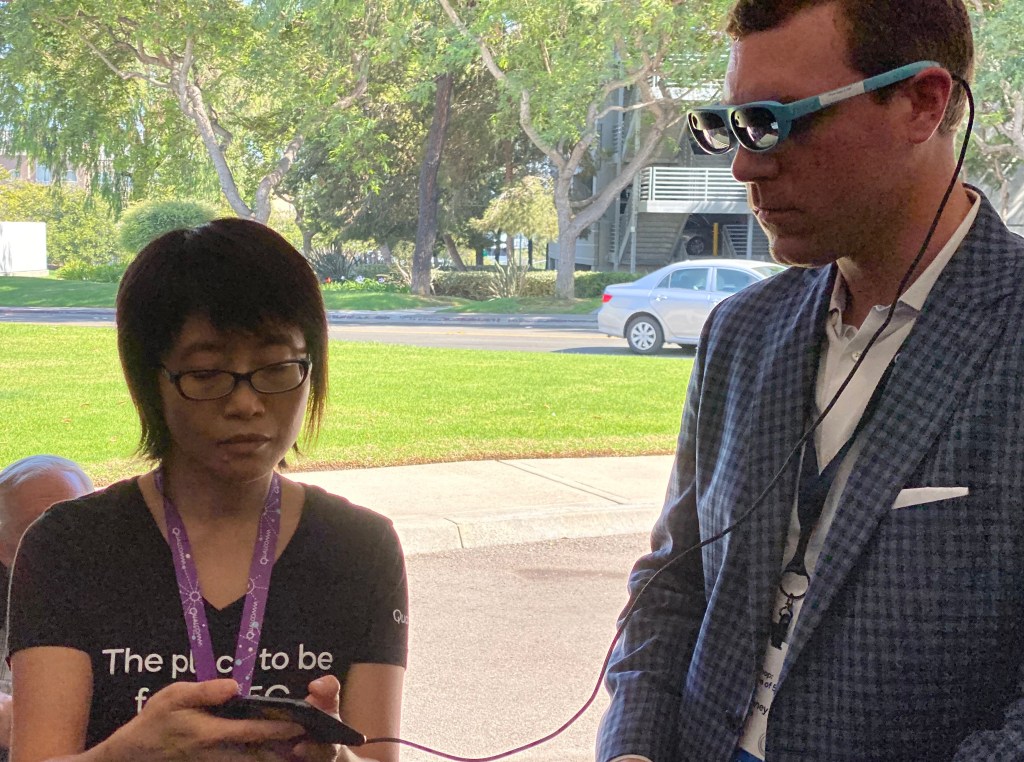 “Augmented reality is the next mobile platform,” Qualcomm said at the event, and it’s going to touch many industries: emergency response, the military, education, health care, manufacturing, and engineering, plus consumer retailing, marketing, and advertising. Partners are already working on 5G-optional AR and XR headsets using Qualcomm hardware: Nreal’s wide-FOV, bright-screened Light AR glasses rely on a Qualcomm smartphone for processing and data, while Microsoft’s latest HoloLens uses a Qualcomm processor and can be fed data with a 5G-to-Wi-Fi hotspot. 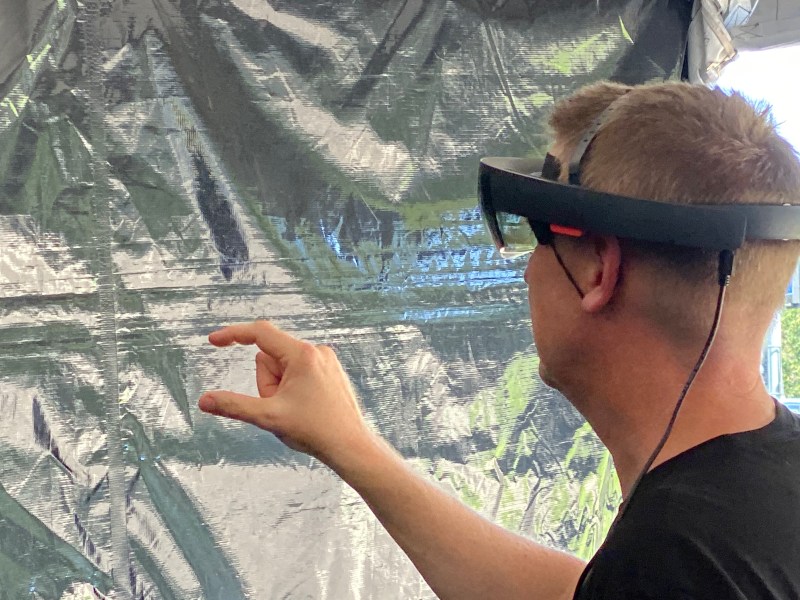 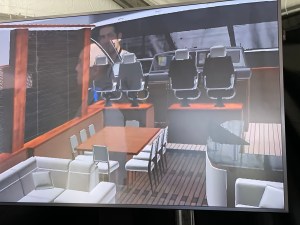 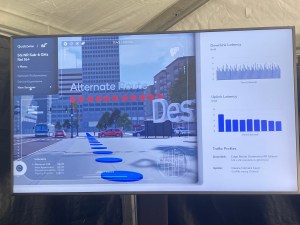 As a big fan of XR technologies, I can’t say that I was blown away by the specific “5G” demos that were being shown at the event, as Nreal’s affordable, cool glasses were only serving as a mirrored 2D display for a racing game on a LG V50 ThinQ 5G’s screen, and the HoloLens demo had an employee walking inside a not-quite-believable 3D boat. Even so, the “very nearly there” form factor of the Nreal glasses makes me optimistic that the future is bright for AR — and that actually compelling real-world applications are just around the corner. 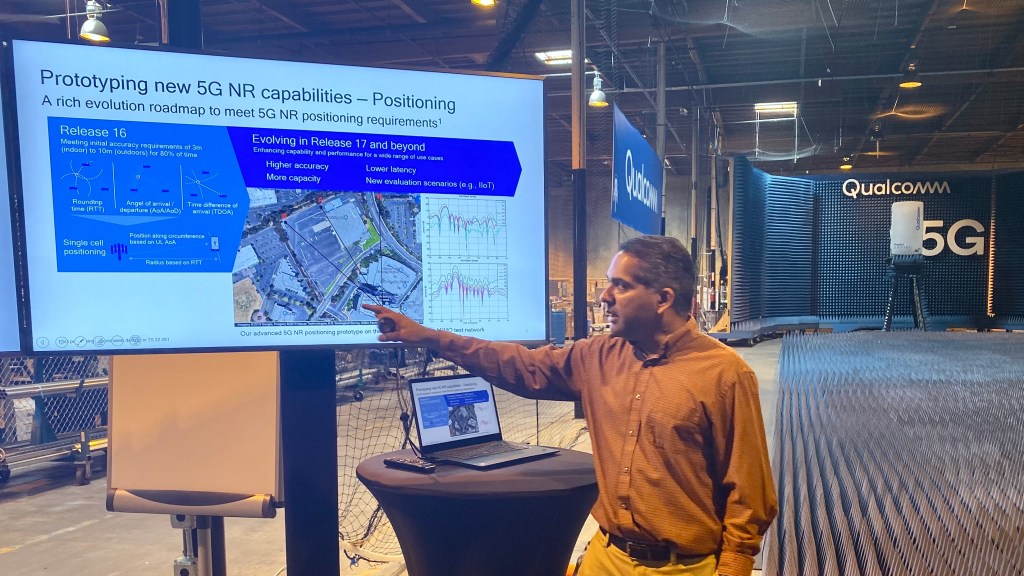 The image above doesn’t really reflect the consumer impact of what will be happening with 5G over the next five years, but the upshot is that the next 5G standard update (release 16) is pushing forward the use of radio signals to accurately determine users’ locations — not for surveillance, but to deliver superior cellular signal quality. Over the next year, the push is to determine a device’s location within 3 meters indoors or 10 meters outdoors 80% of the time, while future 5G releases 17 and beyond will aim for even higher accuracy: a centimeter.

For carriers, this will enable some of the higher-bandwidth signaling strategies mentioned above — being able to direct a 5G radio signal right at a receiving device means superior performance. Beyond better speeds and lower latency, users could also benefit from emergency services that can more quickly get to their locations, and more accurate navigation using on-device maps. 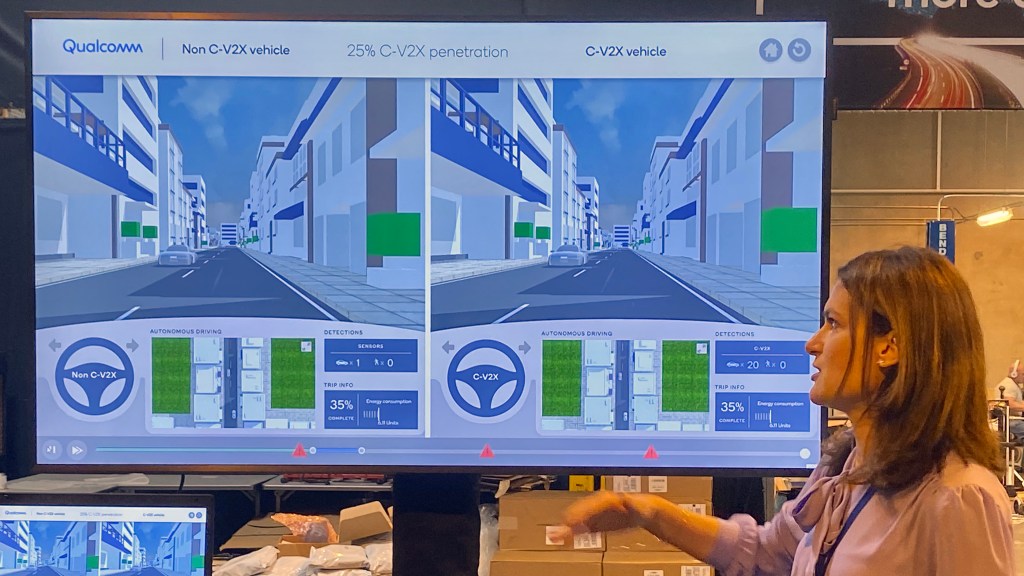 I previously detailed some of the C-V2X (cellular vehicle-to-everything) advancements Qualcomm is working on; this event focused on both what can generally be done with C-V2X and what is coming in the future. The big message continues to be that a car can do far more to anticipate environmental and human hazards when sharing data with other cars than it can gather on its own: One car’s sensors may be able to see a handful of other vehicles and pedestrians, but C-V2X cars will be able to know about multiple vehicle and human positions at any time.

Going forward, 5G C-V2X is expected to help connected cars make better navigation decisions, saving time, fuel, and possibly lives in the process — each equipped car will serve as a mobile radio station that broadcasts information to other vehicles in the immediate area. While the groundwork for C-V2X was laid in late-release 4G standards, it will really come of age and see commercialization in the 5G era, as additional bandwidth, higher reliability, and lower latency will enable cars to share more data faster.

Without getting deep in the weeds on this topic — and it’s an important one — there are a lot of different initiatives moving forward to expand the domestic and international availability of radio spectrum for cellular purposes. The list of acronyms and concepts would melt your brain, but it suffices to say that there are projects in various states of progress ranging from “just launched” to “launching soon” to “still under negotiation,” with the status of each varying on a country-to-country basis.

In a nutshell, these initiatives are going to let 5G devices access more and wider swaths of radio spectrum, akin to letting your car’s FM radio tuner expand above 107.9 to 599.9, while enabling each station to deliver a stronger, better-quality signal. Over the next two years, you can expect more use of well-established sub-6GHz frequencies, while future 5G releases will begin to take advantage of even higher-frequency millimeter wave spectrum in the 52.6GHz to 114.25GHz range. 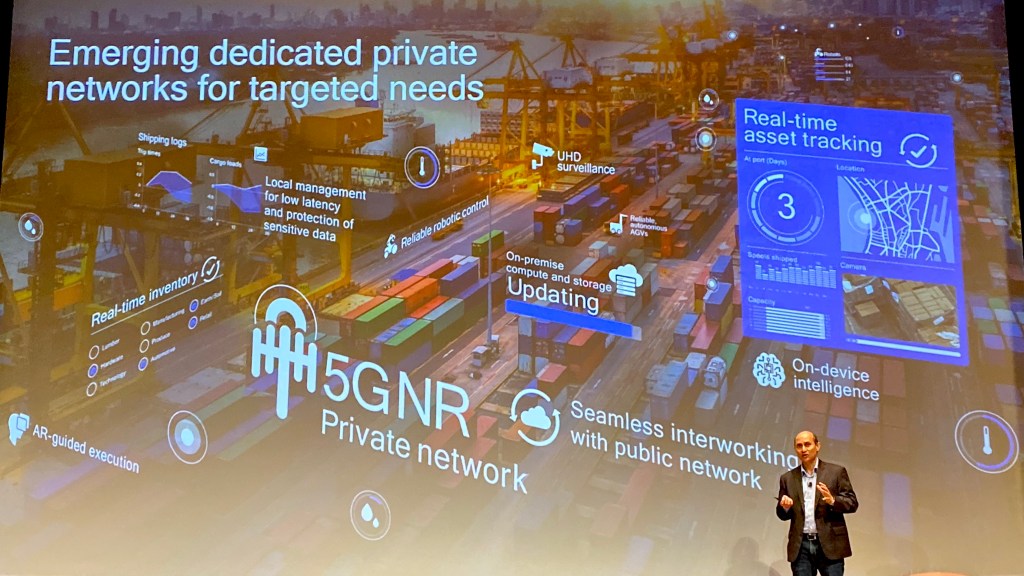 Most people don’t care about enterprise and industrial applications of 5G, but they’re going to be very big deals behind the scenes for companies everyone relies upon. Over the next year, Qualcomm expects 5G to start popping up in PCs, enabling immediate access to shared cloud storage and computing resources, as well as tetherless mobile office functionality: From out in the field, you will be able to access a company’s full slate of resources or bring yourself into the office using virtual telepresence.

One of the elements of this will be private enterprise networks using 5G technology, either run by the company itself or a third party, based on the same or different spectrum owned by cellular carriers. Going forward, these private 5G networks will be paired with Wi-Fi to deliver multi-gigabit speeds, supplying enterprises with everything from traditional employee broadband to AR and surveillance streaming, factory automation, inventory management, and shared computing assets. 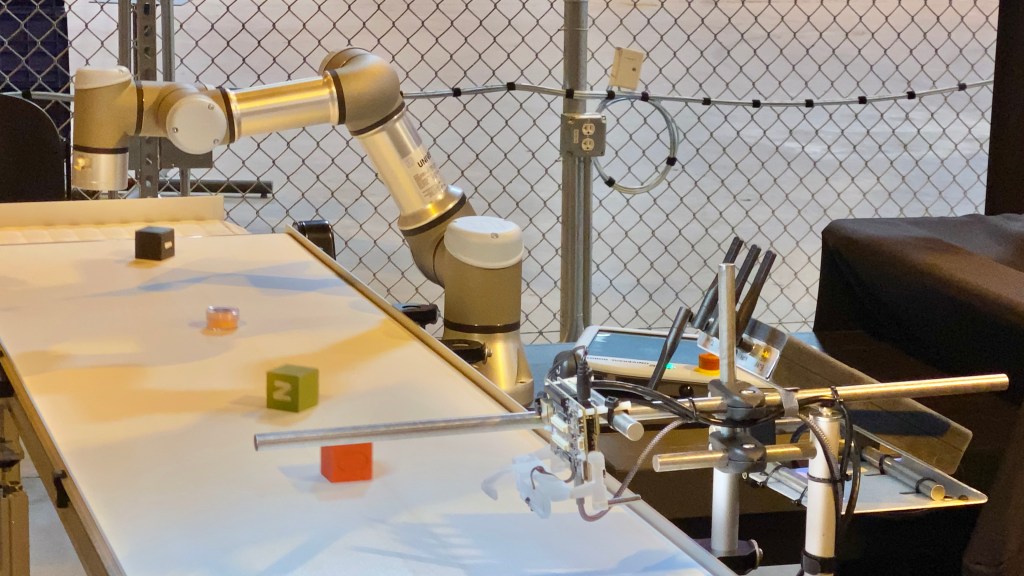 Another topic I covered in greater detail previously is the transition from wired control of factory assets to equally reliable 5G wireless alternatives. In the past, Qualcomm has offered demo videos of how this will work, but this time it had a sample factory line that was doing real-time AI-assisted identification of parts on a conveyor belt, demonstrating how quickly and reliably such a system can operate.

The upshot here is that industrial components such as monitoring cameras and robotic arms can be wirelessly coordinated using 5G small cells connected to a 5G core network and vision processing controller, all moving so rapidly that production proceeds apace despite a remote computer analyzing literally every part that passes by the camera. Without the optimized 5G system in place, wireless communications would lead to missing numerous parts.

Qualcomm also reiterated that multiple small cells will be working together to guarantee the 99.9999% level reliability demanded in factory settings — the key way to prevent temporary physical obstructions from interfering with wireless signals. Synchronized sharing of radio spectrum will be vital to ultra-reliable factory communications, the company says, using various segments of sub-7GHz spectrum that may be differently allocated from country to country. 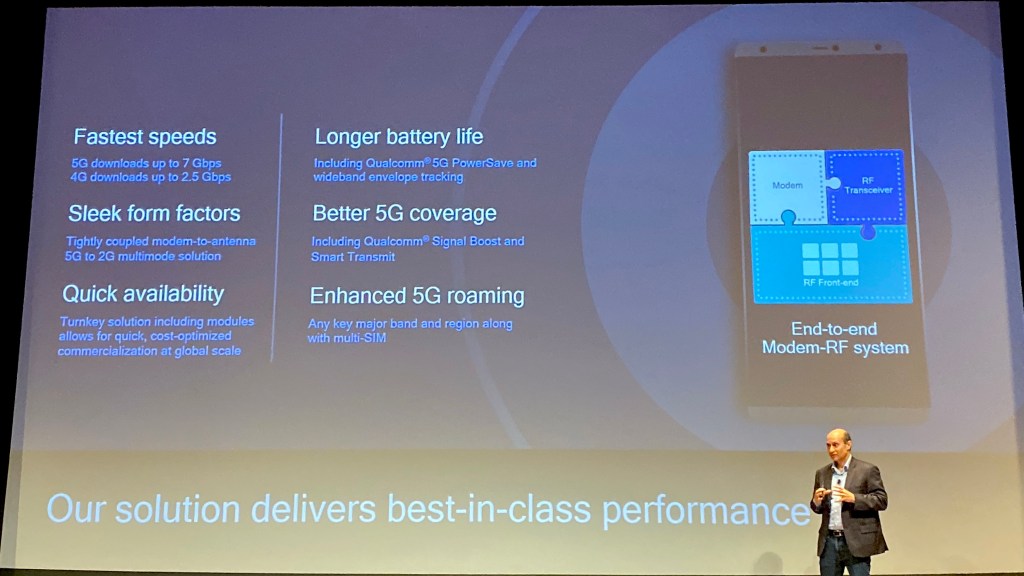 We’re probably going to see more of a push on this point from Qualcomm in the future, and it’s a big deal: tighter integration of all of the parts, from the antenna to the 5G modem. The idea is that customers will see obvious benefits from buying the end-to-end Qualcomm 5G solution rather than building a system on their own, including superior 5G coverage, battery life, and international roaming support.

This makes a great deal of sense for Android OEMs that want to sign an agreement, get a complete 5G module that can pop right into a device, and focus on the look and feel of the device’s exterior. It could create further challenges for companies such as Apple that historically play part vendors off of each other to reduce commodity component costs. In essence, Qualcomm is hoping to de-commoditize its parts.

Even beyond Qualcomm — think Samsung, MediaTek, and Huawei — the clear trend for major companies is bringing as many chips together as possible, achieving energy, memory, and other performance efficiencies in the process. Very few companies will be able to do the full 5G antenna-to-modem integration, then the full 5G-to-system-on-chip integration, but Qualcomm is positioning itself well for that future. 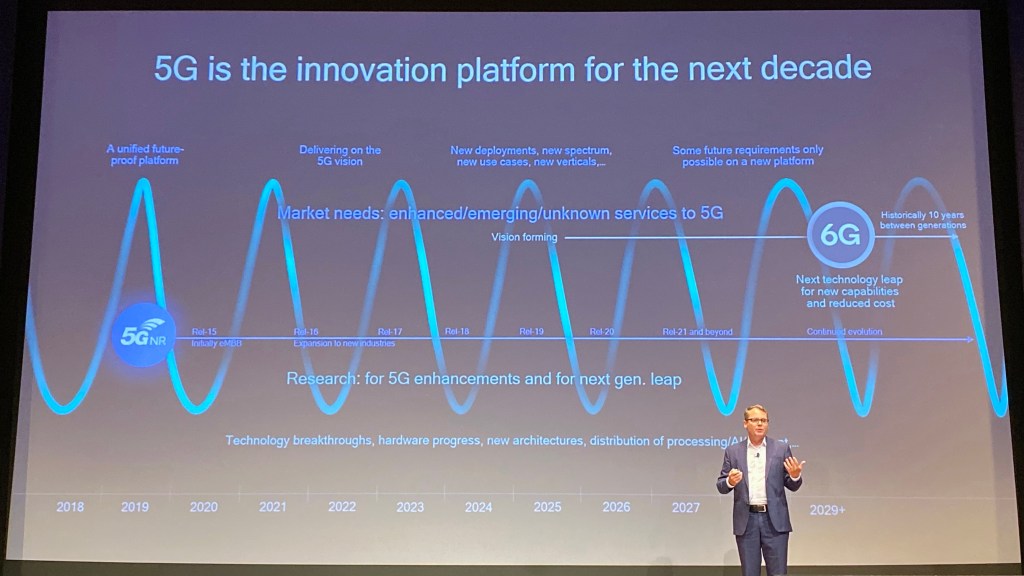 “Here we have a slide with the number 6G on it,” said Qualcomm vice president of engineering John Smee, “and we debated even internally, should we have a slide with 6G on it? Well, the point is, what we want you to understand is that there’s a whole decade of evolution in 5G … There’s a huge roadmap ahead to that continued evolution.”

6G is more of a buzzword right now in terms of, “oh, is 6G going to come next?” Sure, obviously, that’s the next number in the G cycle. But the point is that there’s a huge amount of evolution in 5G itself. There’s tons of more gas in the tank, and at Qualcomm, we’re creating that gas every day. … What’s going to come in release 18, 19, and 20? Well, that’s what we’re already researching.

So there’s a lot to look forward to over the next decade of 5G, and even the next two years will bring some major developments in speed, reliability, and the types of devices with 5G connectivity. It’s refreshing to see a technology company sharing such a long-term development roadmap, as well as a quantifiable track record of prior accomplishments — they collectively make the company’s ambitious vision feel a lot more tangible and achievable.