Tech giants like Facebook, Google, Apple, and Microsoft needn’t be gatekeepers to communication. That’s the idea upon which Matrix, an open standard and decentralized protocol for real-time communication, was formulated. It’s designed to allow users of one service provider to communicate with users of different providers via online chat, voice over IP, and videotelephony, ideally as seamlessly as SMTP (Simple Mail Transfer Protocol) facilitates email exchanges across clients and services.

Implementing the Matrix protocol at scale requires infrastructure and technical expertise, however — and that’s where startups like New Vector have carved out a niche for themselves. In a little over two years, the startup has helped to grow the Matrix network 400% to 11 million users across 40,000 deployments, including French and U.S. government agencies, Wikipedia parent Wikimedia, KDE, RedHat, and more.

That’s no doubt why a chorus of backers sees commercial potential. Today, New Vector announced that it’s raised $8.5 million led by Notion with participation from Dawn Capital and Firstminute, bringing its total raised to over $13.5 million on the heels of an investment from Ethereum app developer Status. CEO Matthew Hodgson said the fresh capital will fuel product and service R&D as well as the Matrix network’s expansion. 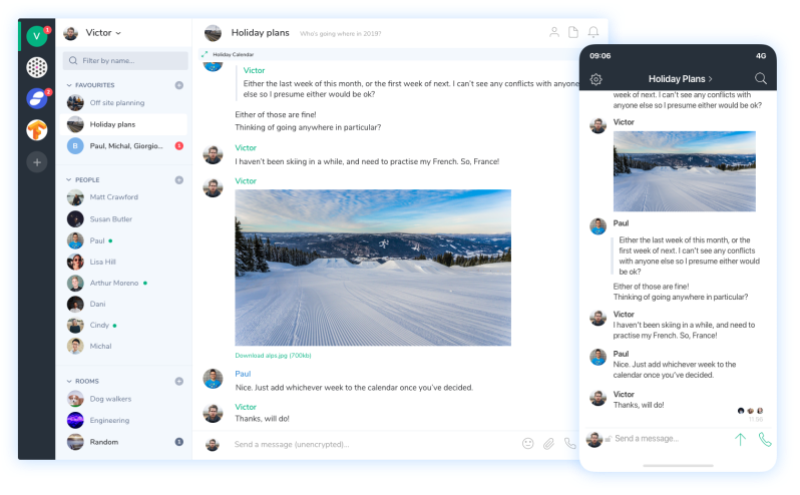 Above: The Riot client.

“Ensuring there are Matrix apps out there which provide a credible alternative to Slack and WhatsApp will make it the natural successor to today’s instant messaging applications,” he added.

New Vector got its start in 2017, when the original Matrix development team — many of whom have experience in the messaging and VoIP industry, and who had been running the largest Matrix server in the network since 2014 — pivoted to pursue the commercial service offerings. (Hodgson and Amandine Le Pape are credited with creating the initial Matrix project inside communications software company Amdocs, which funded development until 2017.) It continues to contribute heavily to Matrix releases, most recently Matrix 1.0, which was released in June to coincide with the launch of the nonprofit Matrix.org Foundation.

Modular — New Vector’s suite of products — offers hosted servers, hosted integrations, and custom integrations with bespoke and legacy systems; pricing starts at $1.50 per active user up to $1,500 for over 1,000 users. Bridges link discussions across different Matrix and on-Matrix networks, and widgets embed third-party apps like YouTube, Spotify, and Google Docs inline with chat.

New Vector also develops Riot, a cross-platform open source, end-to-end encrypted collaboration app available in over 25 languages to access Matrix instances. Riot lets users organize rooms around communities and subject matter, and share files, add widgets, customize notifications (optionally with keywords and mentions), and make video and voice calls and conferences. It can bridge in channel data (including users and groups) to and from existing platforms (like Slack, Gitter, and IRC) and switch among servers on the fly. And Riot supports chatbots that help with tasks like searching Giphy for GIFs or Google images, as well as stickers and sticker packs. 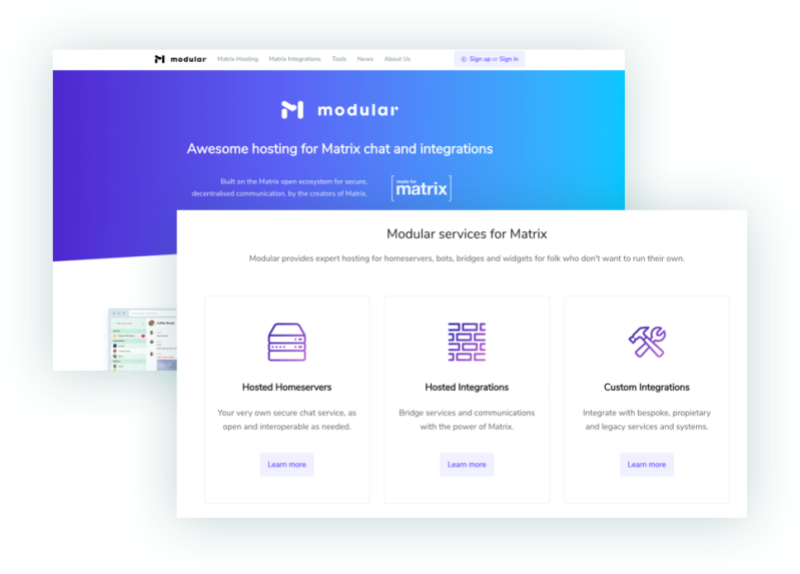 Above: A sampling of the services available from New Vector’s Modular.

End users can create an account on Matrix.org, New Vector’s public server, or one of several free servers open for public registration. And if they opt not to subscribe to a hosted Modular plan, they’re free to self-host using the open source Matrix code and prebuilt packages on GitHub.

“With a digital platform that was both open and independent, the internet heralded an exciting new era in communications. And yet over the last few years, it feels like we have gone backward with communication platforms like Slack and WhatsApp that are walled gardens where users have very understandable concerns over whether their data is secure and how it is being used,” wrote Notion Capital partner Jos White. “At last, the market has an alternative with the New Vector services that are based on the Matrix protocol offering open standards and delivering complete data ownership and security. It feels like the full power and  promise of the internet is being returned to its rightful place — the user — and we couldn’t be more excited about the potential for this exceptional team.”