Uber is continuing its multi-modal push with the news that it’s adding electric mopeds to its main transport app.

The ride-hailing giant has partnered with French startup Cityscoot, which operates an e-moped sharing service across a handful of cities in France and Italy, to allow travelers to book and pay for an electric moped directly through the Uber app. While this will initially only be available in Paris, starting next month, it represents part of Uber’s push to expand its service far beyond on-demand cars.

Cityscoot offers around 4,000 e-mopeds across Paris, and as with other mobility-sharing services users can see the location of all the vehicles plotted on a map. Each ride costs around 29 cents per minute, with the payment charged automatically to the rider’s Uber account. 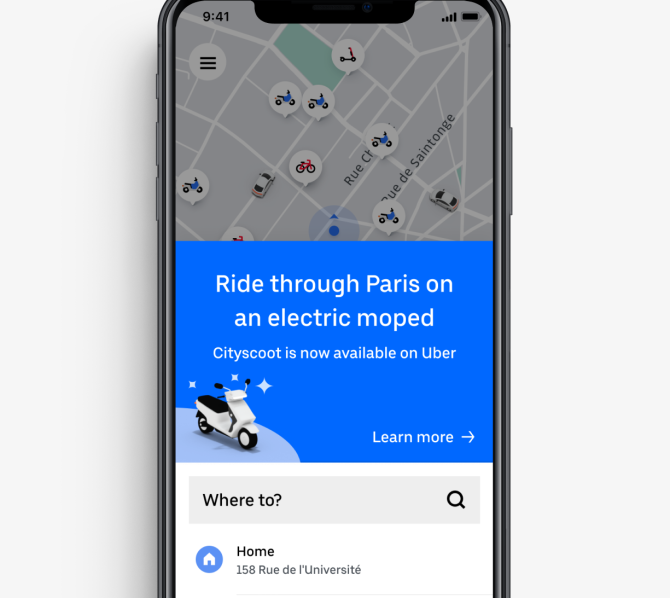 It’s worth noting that Uber already surfaces other forms of transportation through its main app, including public transport options and bikes and scooters from Jump — a company it acquired last year — in addition to rival scooter services such as Lime. It’s all part of becoming what Uber is now calling the “operating system for your life,” which entails making the Uber app a one-stop shop for transport, food, and more in the future.

While electric mopeds will only be available in the French capital at first, it’s likely Uber will strike similar partnerships with other urban mobility companies. Revel, an e-moped sharing company in the U.S. that raised a chunky $27.6 million just last week, seems like an obvious next step for Uber’s partnership plans in its domestic market.

“This is the first time Uber has offered e-mopeds in the app anywhere in the world, and we see it as another step towards our goal to become a one-stop shop for all transportation needs,” Uber wrote in a blog post.

Combining multiple modes of transportation fits with Uber’s plan to anticipate users’ every transport need. Indeed, cars are often not practical (or available) for specific journeys, while public transport may not cover all areas of a city — so offering several options makes sense.

Uber said it envisages people using Jump scooters for distances below 2km, Jump bikes for journeys of around 3km, e-mopeds for trips of around 4km, and cars for longer journeys of up to 9km.