Ever heard of Tobii? If not, here’s the skinny: It’s a Sweden-based company with over 1,000 employees developing eye-tracking equipment and services. Its products are already used by more than 3,500 companies and 2,500 research institutions around the world, including 50 of the top-ranked universities. But with an eye toward further expansion of its customer base, the company’s Dynavox division today unveiled the latest generation of I-Series, a device lineup aimed at people with disabilities like cerebral palsy and amyotrophic lateral sclerosis (ALS).

Tobii says that its fifth-generation I-Series products — the I-13 (a 13-inch device) and I-16 (16 inches) — are the lightest (under 6.3 pounds), fastest, and most durable of their kind on the market thanks to a magnesium chassis that’s IP54 rated to withstand dust and water exposure. Both ship with what Tobii calls a partner window, 5.2-inch 480 x 128 secondary screens built into the devices’ backs that mirror typed phrases to encourage face-to-face communication. And they sport Tobii’s latest hardware platform, the IS5, which enables robust and customizable computer control.

The I-13 and I-16 feature 1080p 16:9 primary screens complemented by 10W rear-firing speakers and a front-facing microphone, flanked by an array of I/O ports including two USB 3.0 ports, two 3.5 switch connector interfaces, one 3.5mm headphone jack, and a charging port. Under the hood, there’s an Intel Core i5 7200U processor (paired with 8GB of RAM and 256GB of storage) and wireless radios supporting Bluetooth 4.1, IR, and 2.4GHz/5GHz 802.11a/b/g/n/ac Wi-Fi, powered by a battery that lasts up to 9 hours on a charge. Above: The partner window.

The newest I-Series is fully compatible with Tobii’s software accessibility suite, including Communicator 5, which converts text and symbols into speech and supports control of IR-enabled devices like TVs and lights. The I-13 and I-16 also work with Snap Core First, which delivers a core word framework that lets users communicate quickly, and with Computer Control, which facilitates common PC tasks with a centrally located user interface and radial settings layout.

Additionally, I-Series devices ship with Tobii’s Snap Scene, which is designed to help children communicate on the fly by snapping and tagging photos with audio recordings. The included Accessible Literacy Learning (ALL) Reading Program teaches basic reading skills to nonverbal students, while wake-on-gaze allows the user to turn on devices using only their eyes.

“Eye tracking unlocks a world of possibilities and with this new device, built on years of research and customer feedback, we have pushed the limits of what a communication device can do,” said Fredrik Ruben, CEO of Tobii Dynavox. “Our goal with the new I-Series is to create the best possible experience and empower our users in their daily lives for increased independence.” 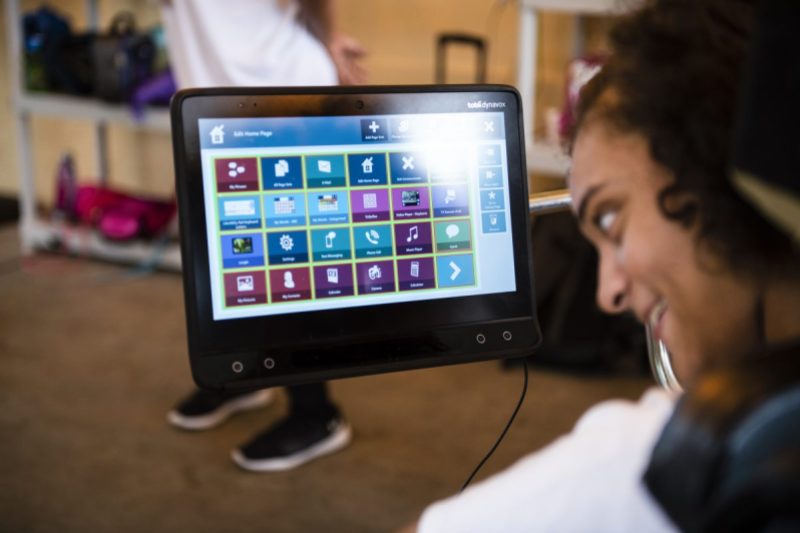 The I-Series, which can be ordered through Tobii’s partner network, comes with an adjustable base that attaches via magnetic connection and props up the device, as well as a charger, a travel bag, and a mounting plate. Both the I-13 and I-16 can be ordered in standard or dedicated setups; the former runs communication software only and doesn’t provide access to other apps, which meets the requirements outlined by Medicare’s and Medicaid’s Speech Generating clause.

Additional accessories, such as keyguards, are available for purchase, as are replacement parts.