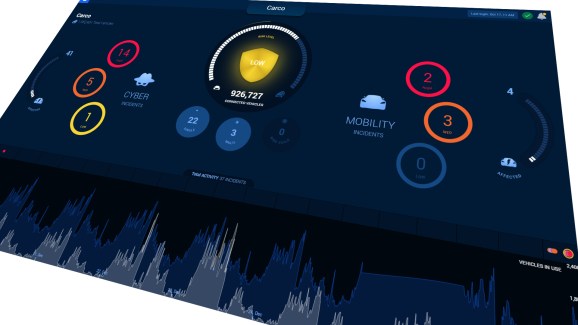 Upstream Security, a cloud-based cybersecurity platform for connected cars, has raised $30 million in a series B round of funding led by Alliance Ventures, an automotive alliance constituting Renault, Mitsubishi, and Nissan. Volvo Group, Hyundai, CRV, Glilot Capital, Maniv Mobility, and Nationwide also participated in the round.

The connected car market was pegged at $63 billion in 2017, a figure that could rise to more than $200 billion by 2025. While this will open up a wealth of opportunities for carmakers looking to inject smarts into their vehicles, it also presents a major challenge — as with any connected devices, cars are susceptible to being hacked. It’s estimated that around 20% of cars on U.S. roads alone are currently connected to the internet, and as that number rises in the coming years, the threat will become more significant.

Indeed, the security dangers with connected cars are perhaps greater than with other devices in the internet of things (IoT), given the potential chaos if cars are taken over remotely by bad actors. A few months back, Los Angeles-based Consumer Watchdog released a report noting that connected cars could be a threat to national security, especially if multiple cars were commandeered simultaneously in a concentrated area. Against this backdrop, Tel Aviv-based Upstream Security is setting out to protect connected vehicles — at rest and in motion.

“Our mission is to protect every connected vehicle and smart mobility service on the planet. The completion of our funding is perfectly timed to meet the growing demand for our data-driven cloud-based platform, providing our customers with the capabilities they need to accomplish this vitally important task,” said Upstream Security cofounder and CEO Yoav Levy.

Founded in 2017, Upstream Security is adopting a “multi-layer” approach to protecting connected cars and the underlying network infrastructure. Its C4 platform integrates with automotive data streams of vehicles and promises to detect incidents as they happen in real time, allocating a rating based on perceived impact and severity. As with cyberattacks across other industries, connected cars face both known threats and hitherto unknown threats, which can be harder to detect. To combat this, Upstream Security said its platform analyzes the normal activity of each vehicle and then uses machine learning (ML) techniques to identify anomalies as they happen. These anomalies are scored and aggregated  over time and “across multiple vehicles,” helping Upstream Security determine genuine threats and minimize false positives.

There are a number of players in the connected car security space, including Israel’s GuardKnox, which recently closed a $21 million round of funding, and BlackBerry, which is investing heavily in automated cybersecurity products as it continues to transition away from its hardware business to focus on IoT security — with automobiles playing a leading role in its product roadmap.

Upstream Security had previously raised around $11 million, and while an extra $30 million in the bank will certainly help it double down on its product development, arguably the most notable facet of this funding is the strategic investments made by some of the world’s biggest automotive companies.

“This first of its kind investor syndicate, which includes some of the most important smart mobility companies in the world, is a testament to the severity of the problem the industry is tackling and a ringing endorsement of Upstream’s technology and the progress our team has made,” Levy added.

Volvo’s investment director, David Hanngren, said that his company weighed up a number of similar platforms before electing to invest in Upstream Security.

“Securing our connected vehicle is always top of mind for Volvo,” Hanngren said. “We looked at several companies in the space but chose to invest in Upstream. They have a great vision for addressing this unique sector, a very impressive management team, and serious depth in both automotive domain expertise and cybersecurity.”