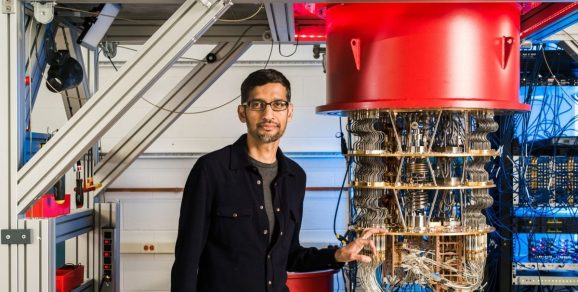 Researchers have long held that quantum computing would one day offer a vastly more powerful architecture, but overcoming the challenges posed by the basic science have left such devices performing remedial tasks that could just as easily be accomplished by existing systems.

Today, Google announced that it has achieved “quantum supremacy.” It’s an industry term that at its most basic level means the team managed to perform something on a quantum computer that would likely not be possible using traditional computing systems.

“In many ways, the exercise of building a quantum computer is one long lesson in everything we don’t yet understand about the world around us,” wrote Google CEO Sundar Pichai in a blog post. “While the universe operates fundamentally at a quantum level, human beings don’t experience it that way. In fact, many principles of quantum mechanics directly contradict our surface-level observations about nature. Yet the properties of quantum mechanics hold enormous potential for computing.”

People lamenting that there doesn’t seem to be much fundamental innovation happening in the tech industry should see this breakthrough as evidence to the contrary.

Currently, the typical computer uses bits that can be in one of two states: open or closed, zero or one. These bits travel in electrical circuits controlled by transistors. For decades, this architecture has transformed the world by roughly following Moore’s Law, which projected that computing power would double every 18-24 months.

But researchers have also grown nervous that computers are reaching the physical end of Moore’s Law. That would severely cramp advances in areas such as autonomous vehicles and personalized medicine, which are going to need vastly greater computing to realize their potential and manage the massive data they require.

This is hopefully where quantum computers will remove those roadblocks. A quantum computer such as the one created by Google works at the quantum level by manipulating atoms and putting them into a “quantum state.” This means these systems can simultaneously exist in several states, allowing for greater computing complexity than the current binary states.

These “quantum bits” or “qubits” will eventually be able to perform infinitely more complex tasks. This includes such scenarios as creating a citywide routing system that optimizes the route of every self-driving vehicle. The ability to model molecules or the whole brain more precisely using quantum computers could transform medicine and material science.

The problem — and it’s a big one — is that qubits only exist briefly. For decades, researchers have been trying to expand that lifespan, while also trying to find ways to get more qubits to work together, a phenomenon known as “quantum entanglement.”

In announcing the achievement of quantum supremacy, Pichai described it as a “Hello, World” moment:

To demonstrate supremacy, our quantum machine successfully performed a test computation in just 200 seconds that would have taken the best known algorithms in the most powerful supercomputers thousands of years to accomplish. We are able to achieve these enormous speeds only because of the quality of control we have over the qubits. Quantum computers are prone to errors, yet our experiment showed the ability to perform a computation with few enough errors at a large enough scale to outperform a classical computer.

The Trump administration hailed the breakthrough with a press release from the White House. Last year, President Trump signed the National Quantum Initiative Act, which committed $1.2 billion over 5 years for quantum research.

Currently, a variety of large companies are tentatively exploring quantum computing via services like those offered by IBM. In addition, a number of startups — including D-Wave, which has raised $194.7 million in venture capital — have been racing to develop their own commercial quantum systems.

Quantum computing will eventually raise its own ethical concerns, including the ability to render current cryptography useless. But for the moment, Google has opened a door into a future that could potentially dwarf the computing accomplishments of the last 50 years.