Facing accusations that it disseminated untruthful ads and allowed misleading news to slip through its filters, Facebook today recommitted to curation with a product — Facebook News — intended to spotlight top-quality daily news. The company describes News, which launches this morning for a subset of Facebook users (roughly 200,000) in the U.S., as a means of giving readers more control over the coverage they see and the freedom to explore a range of interests.

With a shortcut that appears in the toolbar at the bottom of Facebook’s mobile app, Facebook News highlights developing stories deemed relevant to the national conversation by curators who source from select publishers. But it also showcases original reporting from local publications in major metros, including New York, Los Angeles, Chicago, Dallas-Fort Worth, Philadelphia, Houston, Washington D.C., Miami, Atlanta, and Boston, with more to follow in the coming months.

The News experience centers around key features identified in the course of Facebook’s partner outreach: trending stories, personalization, topic and subscription sections, and controls. The aforementioned curators, who Facebook says are free from editorial intervention, populate a dedicated tab — Today’s Stories — with articles chosen according to publicly available guidelines. Personalized content that isn’t manually aggregated, like regional and independent reporting, is selected algorithmically.

Specifically, Facebook says that news topics will be selected based on prevalence, impact, interest, and diversity. Individual stories within those topics will generally favor factual accuracy, a diversity of included voices, originality, on-the-record reporting, timeliness, depth and context, fairness, and locality. 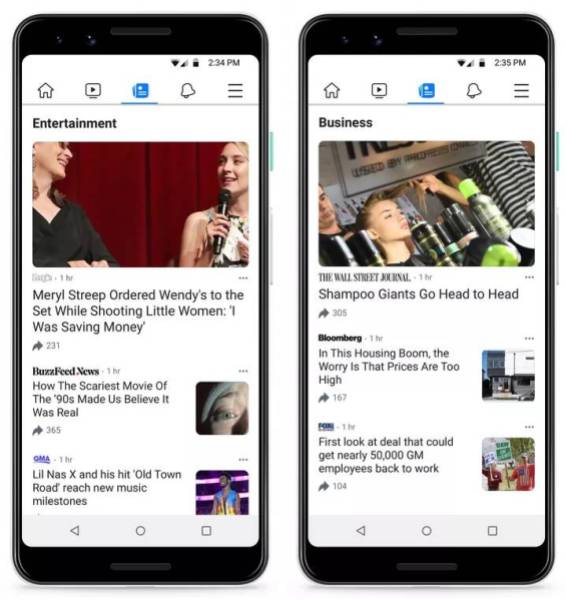 News allows users to choose which publishers they’d like to see and to hide articles and topics from those they’d rather not. For users with subscriptions linked to their Facebook account, a new section collates the content they pay for. And Facebook says that News will eventually fold in content from Today In. By way of a refresher, Today In allows Facebook users to browse news, events, discussions, and more related to their current city, and it recently expanded to over 6,000 towns and cities across the U.S. (up from six in January). 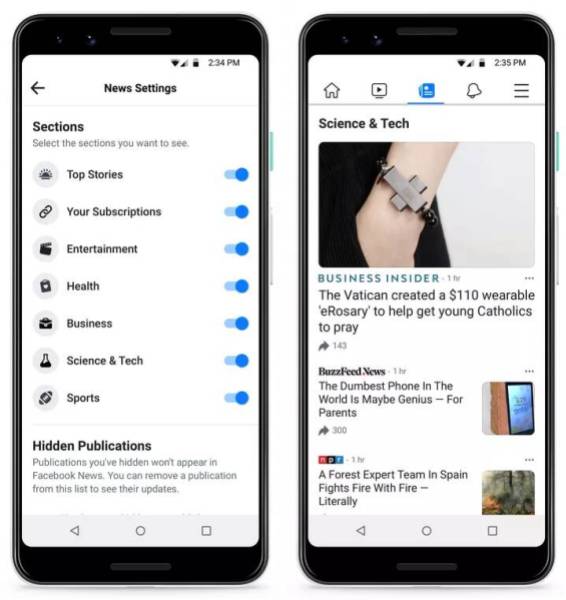 The initial crop of publishers in News falls under four categories — general, topical, diverse, and local — informed by a survey of 100,000 people conducted by Facebook earlier in the year. Each outlet was evaluated on a set of evolving criteria for potential inclusion:

Facebook declined to identify exactly which publishers made the cut, but sources tell the Financial Times that the list totals roughly 200. Notable among them is the Wall Street Journal, BuzzFeed News, Business Insider, the Washington Post, and Down Jones properties, including Barron’s, MarketWatch, and Financial News.

“People want and benefit from personalized experiences on Facebook, but we know there is reporting that transcends individual experience. We want to support both,” wrote Facebook’s vice president of global news partnerships, Campbell Brown, and News product manager Mona Sarantakos in a jointly authored blog post. “As we looked to build a place where people can find more news on Facebook, we changed our approach to gather insight from journalists and publishers before we started developing a product. We talked to news organizations about what they’d like to see included in a news tab, how their stories should be presented, and what analytics to provide.”

A long road ahead

At least at first, publishers reportedly won’t have a way of distinguishing referral traffic from the News Tab from other parts of Facebook, such as groups. Participating outlets must build a separate API that the News platform can ingest directly, according to Digiday, and it’s unclear how newsrooms will interact with Facebook’s team of curators on a day-to-day basis.

However, what is clear is Facebook’s zeal for Facebook News. Business Insider reports that Zuckerberg told at least one media executive the tab could attract up to 15% of Facebook’s over 2 billion users, and Facebook is said to have offered to pay some news outlets upwards of $3 million to license content.

News is something of a rejiggering of the Explore Feed, a Facebook redesign scrapped last year that would’ve bifurcated the News Feed into content from (1) friends and family and (2) brands, publishers, and businesses. Zuckerberg justified the move prior to its abandonment by asserting it would deemphasize virility in favor of sources users deemed trustworthy.

Last year, Facebook implemented a series of planned changes intended to reduce the prevalence of posts from businesses, brands, and publishers in the News Feed. In a lengthy statement published in January 2018, Zuckerberg said the algorithmic tweaks were in response to complaints that public content had “crowded out” personal moments.

“[Research has shown that] strengthening our relationships improves our well-being and happiness,” he said, “[W]e feel a responsibility to make sure our services aren’t just fun to use, but also good for people’s well-being.”

Facebook has in recent years taken a number of steps to address criticism of the News Feed’s content mix. In April, the company outlined steps to stop scams and other “problematic” posts from going viral on the platform (particularly within private Facebook groups). And in 2016, it shut down a trending topics feature that a Gizmodo report alleged suppressed stories featuring conservative points of view.

Facebook is hoping News will avoid a similar fate.

“Facebook News was built to bring people closer to the stories that affect their lives. We’ll continue to learn, listen, and improve News as it rolls out more broadly,” wrote Brown and Sarantakos. “We hope this work aids in our effort to sustain great journalism and strengthen democracy.”