DJI today debuted a new drone — a new miniature drone, to be exact. It’s called the Mavic Mini, and it’s a quadcopter with extendable arms that fold tightly to fit in one hand. Leaks this week and earlier this summer spoiled the surprise somewhat, but we had an opportunity to go hands on with the Mavic Mini at a briefing ahead of its launch.

The Mavic Mini bundled with a battery and radio controller is available for preorder today starting for $399, or $499 with a starter kit that includes an additional two batteries, a prop cage, and a charger. Both SKUs will begin shipping November 11.

Here’s everything else you need to know.

The Mavic Mini, whose nomenclature implies kinship with the rest of DJI’s Mavic lineup, is closer in kind to Parrot’s Anafi than the larger Mavic 2 Pro and Mavic 2 Pro Zoom. It’s meant to fill out the low end of the range below the $919 Mavic Air, which features a similar folding design.

“We discovered that there’s tons of people out there who know about drones and love aerial videos and photography, but the idea of learning where to fly and how to fly is too intimidating,” said DJI’s head of North America partnerships Romsin Oushana. “We made Mavic Mini with these people in mind.” 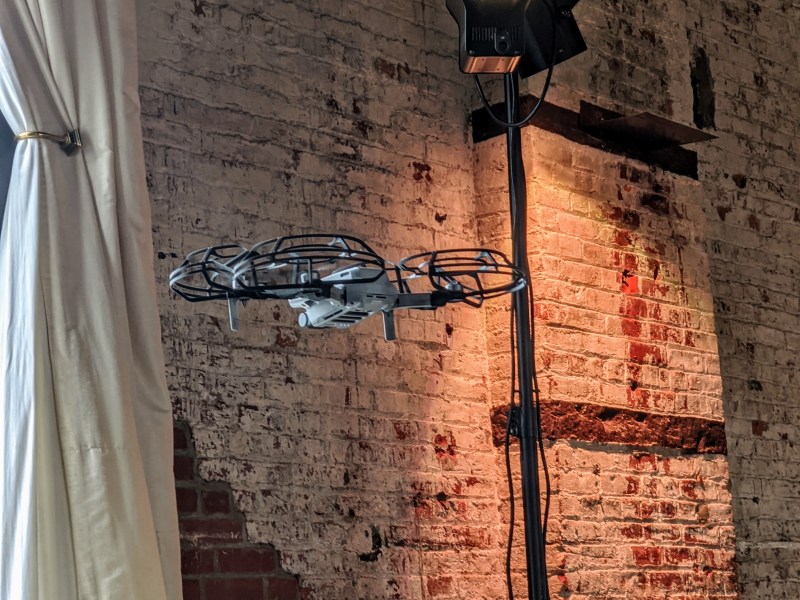 Above: The DJI Mavic Pro with protective prop guards over its propellers.

The Mavic Mini measures roughly the length of a smartphone when its propellers are folded inward, and about two inches longer when they’re unfolded. It’s lightweight at 249 grams, which DJI says contributes to its flight time of 30 minutes. (For the sake of comparison, that’s a full 66 grams lighter than the Anafi and 181 grams lighter than the Mavic Air.)

The Mavic Mini can communicate with the bundled controller and beam HD video from up to 2.5 miles away, and its downward-sensing guidance system enables it to hover in place or to land very precisely. There’s GPS onboard for positioning, as well as Wi-Fi for pairing, and physical notches around the propellers to accommodate 360-degree protective prop guards.

A new app ships alongside the Magic Mini, featuring a streamlined and minimalist UI with quick access to pitch and yaw controls and drone settings. A new tutorial lets pilots virtually fly out the Mavic Mini before they attempt a real-world flight, and built-in media touch-up features let users edit clips themselves or tap a library of “cinematic” templates. 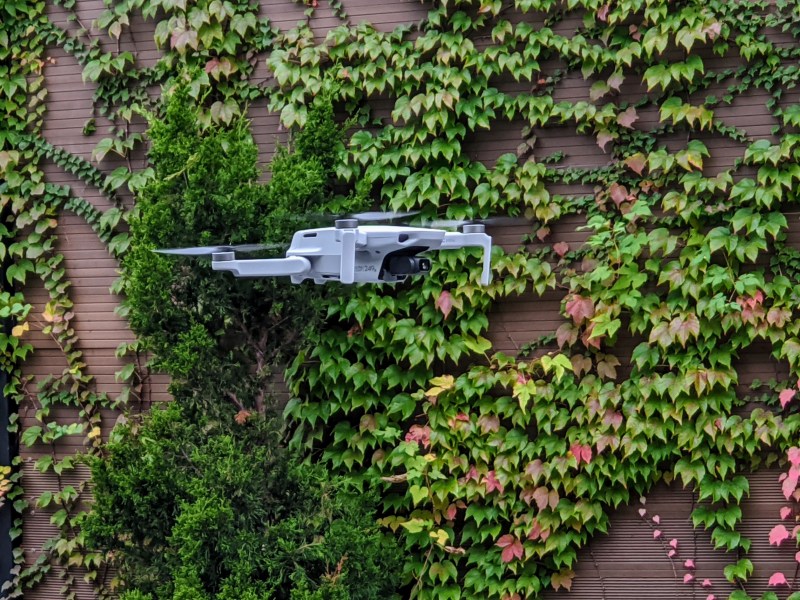 Above: The DJI Mavic Mini flying in the foreground of overgrowth.

Where filming is concerned, there’s Cinesmooth, which automatically slows down the drone’s speed to stabilize its movement for shooting. That’s in addition to Quickshot, which has four distinct modes of operation: Rocket, Dronie, Circle, and Helix. The Mavic Mini flies straight up with Rocket active, while Dronie triggers the drone to face its pilot while flying backward and upward. Circle keeps the subject in the center of the frame while the camera slowly spirals around, and Helix slowly backs away while rising upward and circling around an axis.

I briefly (and cautiously) piloted the Mavic Mini earlier this week during a briefing with reporters. It seemed responsive to my unpracticed eyes and thumbs, and I’m pleased to report that the guided takeoff and landing feature — which automatically launches and sets down the Mavic Mini with the tap and hold of a button within the companion app — worked like a charm. We’ll reserve further judgement pending a full review.

The Mavic Mini ships will be available alongside a few accessories, including a building block adapter for mounting the drone when it’s stationary and a DIY creative kit with stickers to customize. Pricing and availability info for those is forthcoming.