At Samsung Developer Conference 2019 today, Medtronic and Samsung showed off a Galaxy smartphone app, Patient Programmer, that allows patients to manage their own therapy for Parkinson’s disease. Nearly a million people in the U.S. live with the disease, which affects the brain and produces worsening tremors, reduced movement, body stiffness, and cognitive changes.

To treat it, Medtronic partnered with clinicians 20 years ago to help develop deep brain stimulation (DBS) technology to alleviate symptoms. The Medtronic DBS therapy system involves implanting a neurostimulator device in the patient’s chest. Thin wires, called leads, extend from the neurostimulator to the brain to deliver electrical signals. Those electrical signals stimulate a part of the brain, helping to reduce tremors. And as you can see from the video embedded in this post, it can make a big difference for patients.

Medtronic worked with Samsung to create the Clinician Programmer in 2018. To help clinicians and patients better optimize the therapy, Medtronic sought user-friendly mobile devices to adjust the programming of DBS implants and to put more control into the patient’s hands. 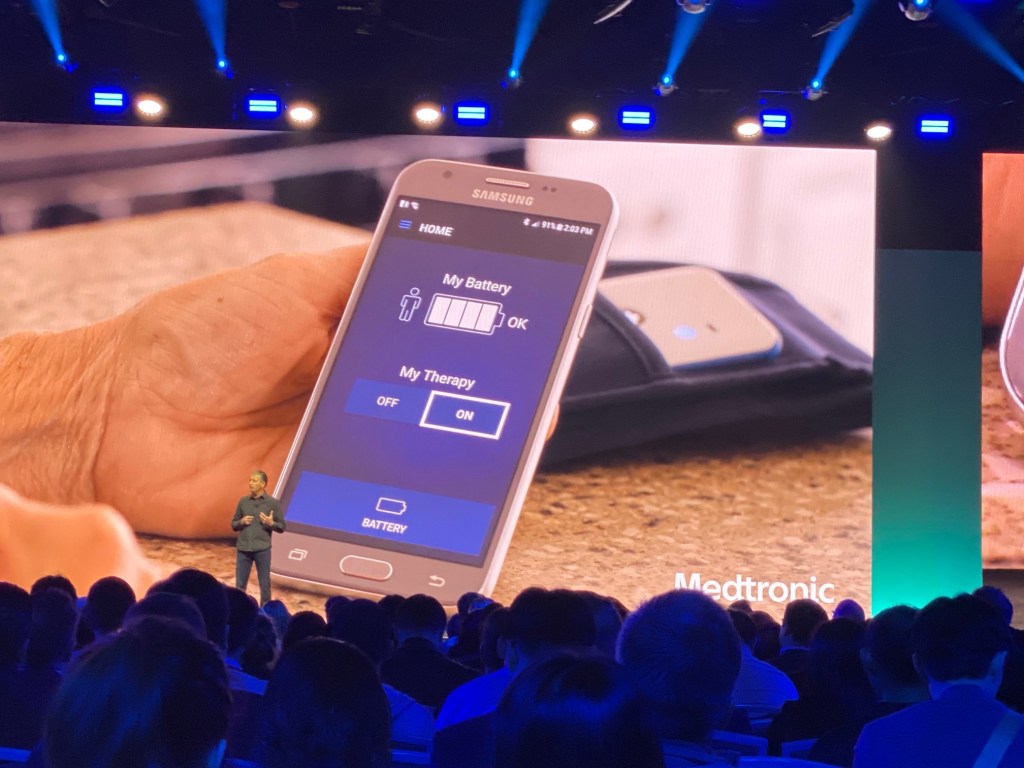 The app was for physicians and it was built around a custom-configured Galaxy tablet, which connects to the DBS communicator via Bluetooth. The data was encrypted to protect patient data privacy. The tablet had a preloaded Activa application that allowed physicians to review patient programming history and usage, visualize neuronal activation, and optimize treatment through a more streamlined workflow.

Since the Clinician Programmer project was a success, the partners moved forward with the development of Patient Programmer, unveiled today at the Samsung Developer Conference in San Jose, California. 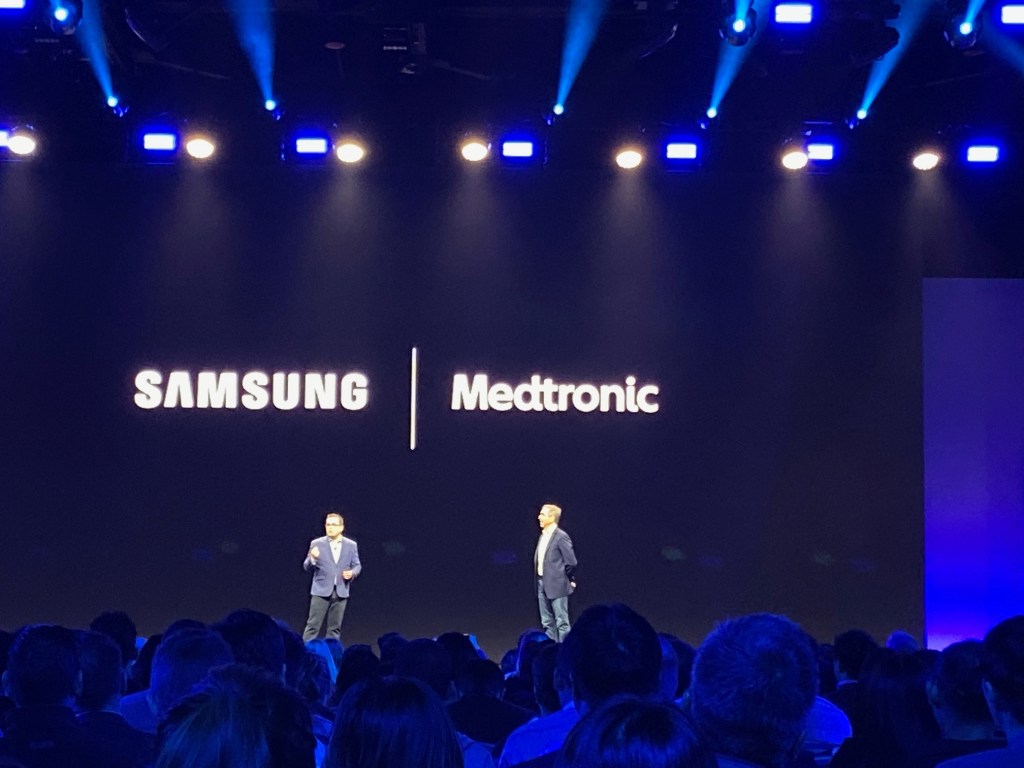 Above: John Curtis of Samsung (left) and Earl Slee of Medtronic at SDC.

The Patient Programmer app uses a Samsung smartphone to enable the patient to adjust their physician-prescribed DBS therapy between clinic consultations.

One patient, Susan Mollohan, a former high school administrator in Derry, New Hampshire, was diagnosed with Parkinson’s in 2008. Prior to receiving surgery for DBS, she described Parkinson’s as a “living death.”

She said, “You are still living but you’re watching things die off. I had to give up my job — that’s something that died off. My hand would be rigid up against my abdomen and my fingers were like a claw.”

After she received the DBS therapy, Mollohan found her Parkinson’s tremors were greatly reduced and her movements freer.

“I have taken up the hobby of photography painting and drawing,” said Mollohan, who was in the audience at SDC. “Deep brain stimulation surgery has given me my life back.”

The DBS therapy improves quality of life for patients with Parkinson’s disease. However, Medtronic sought to help physicians by making the implant programming process easier and help patients by putting more control over the physician-prescribed therapy into their hands. The company wanted user-friendly devices for both physicians and patients. And, for patients, they also hoped to find a device that allowed treatment to be more discreet. That’s where the smartphone app came in.

“It begins and ends with patients,” said Earl Slee, vice president of technology at Medtronic, onstage at SDC. “We can place an electrical wire in the brain where we modulate the abnormal electrical energy and improve the patient’s movement symptoms. We are not stopping there. In the near future, we will launch DBS devices with brain sensing capability. The Clinician and Patient Programmers, are the first of several building blocks in our innovative product portfolio.”

In the future, he said, Medtronic can collect thousands of patient-years of data and help optimize the treatment for specific individuals based on that data.

Taher Behbehani, Samsung’s head of mobile B2B, said that readmission rates for cardiac patients is 15%, and that costs $41.8 billion in the U.S. But using Samsung Galaxy watches to monitor heart rates, physicians can review patient data via a dashboard and counsel patients from afar.

Kaiser Permanente tested this on 2,300 cardiac patients, and they found that 87% of patients using the watches stuck with their exercise routines, compared to 50% for those who didn’t use them. The readmission rates dropped to 2%, and now Kaiser is rolling the program out nationally.