Faire, a wholesale marketplace that helpers creators find independent retailers, has raised $150 million in a series D round of funding co-led by Lightspeed Ventures and Peter Thiel’s Founders Fund. Khosla Ventures, Forerunner Ventures, and YC Continuity also participated in the round.

This takes Faire’s total funding to nearly $270 million since its inception less than three years ago and almost doubles its valuation from $535 million at its series C round last December. At a $1 billion valuation, Faire is now a bona fide unicorn.

Founded out of San Francisco in 2017 as Indigo Fair, Faire was the brainchild of a trio of former Square employees: Max Rhodes, Daniele Perito, and Marcelo Cortes. The company targets smaller local retailers with a marketplace where they can procure “unique” merchandise for their stores — anything from appliances and condiments to jewelry and kitchen accessories. It’s kind of like Etsy, but with minimum purchase quantities in place, highlighting the fact that it’s aimed at wholesalers rather than consumers.

Faire’s technological proposition extends beyond a simple marketplace and into the realms of artificial intelligence. Indeed, the platform leverages machine learning to automatically match local retailers with the most relevant makers for their stores, while the algorithms developed in house serve to improve product recommendations, ranking, search, logistics, and more.

“Starting a business can provide a level of autonomy and fulfillment that’s become difficult to find elsewhere in the economy,” said Rhodes, who serves as CEO. “It can also be an intensely challenging and solitary path. We created Faire with the goal of making that path easier for millions of makers and retailers throughout the world.” 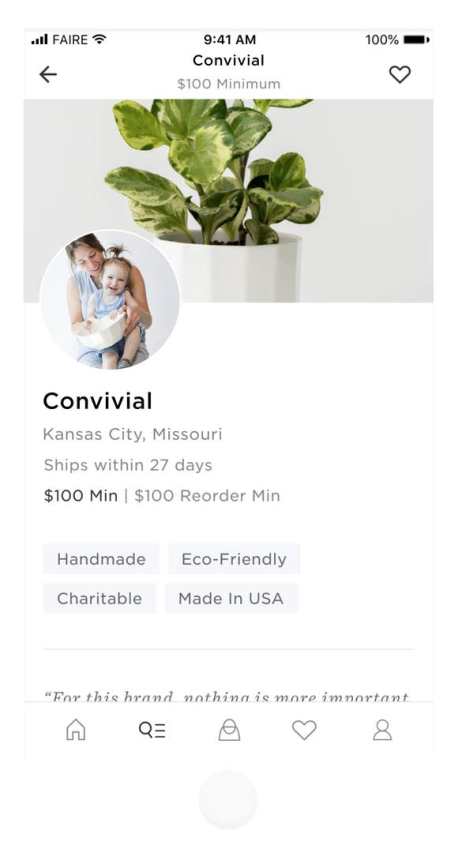 Faire now claims 150 employees spread across offices in San Francisco, Salt Lake City, and Kitchener-Waterloo, the latter underpinning its recent expansion into Canadian retail. Faire also said it’s now notching up $1 million in sales each day, a figure it was racking up each month at the beginning of 2018.

The size of Faire’s latest funding round — and the new valuation — validates the demand for differentiation in a world increasingly dominated by Amazon and its ilk, with countless lookalike products available across millions of third-party retailers. In short, it can be difficult to locate unique and independent goods online.

“By simplifying the wholesale buying process, Faire helps retailers and makers spend more time doing what they love,” said Rhodes. “Retailers get more than 7,000 of the best makers in the world available at their fingertips, making it easy to find the perfect goods for their community. Makers with great products can instantly access more than 50,000 stores, where they can showcase their creativity to tens of millions of local shoppers.”

With another $150 million in the bank, the company plans to scale into new markets and improve its marketplace proposition.

“Raising money is sometimes mistaken for success,” Rhodes added. “We view this fundraise as an important milestone for the future of retail. Our success will look like more diversity in local communities — special and unique downtowns where people can discover high-quality items sold in stores owned by their neighbors.”