WhatsApp is finally rolling out fingerprint unlocking to Android phones, some 10 months after the feature was first teased in an early Android beta build.

It’s worth noting that WhatsApp has already introduced biometric security to its iPhone app, having added support for Face ID and Touch ID back in February. Touch ID, which involves using your fingerprint to authenticate an app, is available on the iPhone 5S to the iPhone 8 / 8 Plus, after which Apple replaced Touch ID with its facial recognition system.

So while we already knew WhatsApp was adding biometric unlocking, today’s announcement finally brings it to the masses. This is a notable development for WhatsApp, given that one of its core selling points is the security it offers through end-to-end encryption. Fingerprint unlocking makes things even more secure as it encourages users to lock the app down even if the device itself is unlocked.

To activate the feature, head to the app’s settings, then to “account” and “privacy.” Toggle the “fingerprint lock” switch and then choose when WhatsApp should automatically lock itself: immediately, after 1 minute, or after 30 minutes.

Users can also choose to view the messages in push notifications, which means anyone else would be able to view it, too, though they wouldn’t be able to open the WhatsApp app itself. 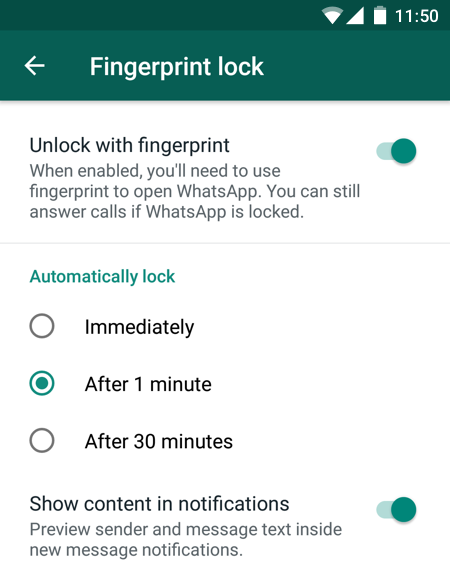 All that’s really missing now on Android is the ability to unlock WhatsApp using facial recognition technology. While Android phones have in the past offered “face unlock” features to unlock devices, Google’s new Pixel 4 takes things to the next level by allowing users to authenticate themselves in a handful of third-party apps, including password managers and banking services.

As more Android device makers add face unlocking smarts, we can likely expect WhatsApp to embrace this functionality in the future. However, a spokesperson told VentureBeat that they couldn’t comment on future plans.