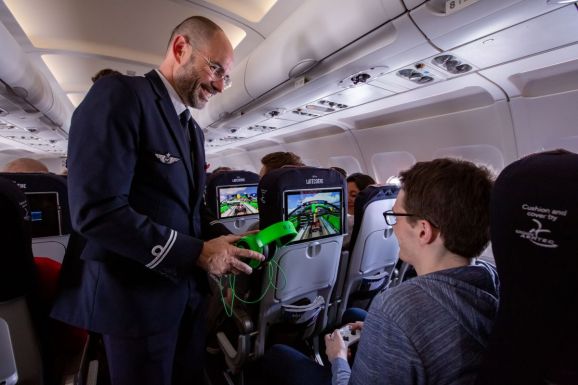 The Li-Fi standard took a big step forward this week when Air France deployed the light-based wireless internet system on a commercial flight for the first time.

The demonstration was the result of a partnership announced earlier this year between the airline Latécoère Group, which makes airplane components, and Oledcomm, the Paris-based startup that has been commercializing the technology. Li-Fi, short for “light fidelity,” uses light to beam internet connections to devices, rather than relying on the radio waves that are the basis of Wi-Fi.

Oledcomm currently sells LifiMax, which has top speeds of 100 Mbps. But the company says it has achieved 1Gbps with its next generation, which it will officially announce at CES 2020 in January. That advance is critical because new Wi-Fi 6 systems are reportedly hitting speeds that pass 2Gbps.

“It gives us huge credibility,” he said. “And it sends a message to the market that Li-Fi’s level of robustness is impressive and that we are ready to provide an alternative.”

The road to Li-Fi has been long. First developed in 2005 by French researcher Suat Topsu and colleagues, it was spun out into the startup Oledcomm in 2012. Since then, the company has been refining the technology to increase its speed and reliability.

Oledcomm’s LiFiMax system uses a modem that can be installed in the ceiling of a room and beams light to a dongle that connects to devices via USB. The company says Li-Fi is far more secure than Wi-Fi because the light beams can’t penetrate walls and be intercepted by third parties.

To address the specific needs of the airline industry, the company spent another two years adapting the technology and worked in partnership with Latécoère to create an entire in-flight entertainment system. For the Air France flight, the system was installed in 12 seats, and a select group of passengers was invited to fly and participate in a video gaming tournament organized by Ubisoft.

The eGaming tournament had been announce earlier this year, and the Li-Fi system enabled both high bandwidth and low latency that allowed the players to battle each other during the flight.

Azoulay said a Li-Fi-based entertainment system offers airlines a couple of advantages. A typical inflight entertainment system weighs 1.3 tons, but a Li-Fi version could weigh about half that. And the low latency could enable new services like gaming and virtual reality in air, he said.

“We are very proud to be the first airline to fly a Li-Fi-equipped aircraft and to organize a video game competition in flight,” said Antoine Laborde, Air France innovation manager, in a statement. “I am convinced that this experiment paves the way for new onboard entertainment experiences for our customers, especially gaming.”

Azoulay said Oledcomm doesn’t necessarily see airplanes as a huge market going forward. But he does foresee adoption continuing to spread in that industry using the same formula: an emitter beaming the connection to a dongle that’s connected to a tablet of some kind and offers a rich inflight entertainment system.

The company is still pushing device companies to build Li-Fi compatibility into mobile gadgets. Down the road, devices with Li-Fi could further transform the flying experience, he said.

For now, Oledcomm is focused on working with partners such as Ford to build the technology into third-party products. And it’s targeting additional markets — like law firms and corporations — that also need greater security than Wi-Fi can offer.

“Wi-Fi today is considered fragile from a cybersecurity point of view,” Azoulay said. “Lawyers and defense companies, they have an appetite for wireless security. We are providing an unhackable solution, thanks to Li-Fi.”