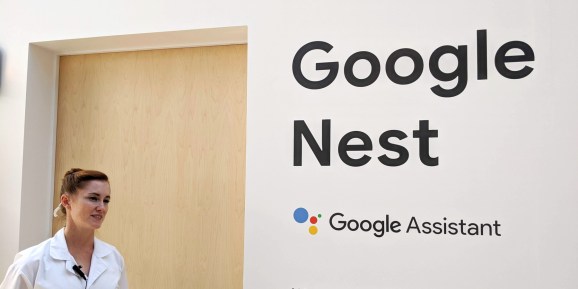 At its annual hardware event last month, Google unveiled the Nest Mini as well as the Nest Wifi Router and Nest Wifi Point. The former went on sale for $49 on October 22 while the latter goes on sale today starting at $269 for a two-pack and $349 for a three-pack. Unlike their predecessors, Google Wifi and Google Home Mini respectively, these devices come with a dedicated machine learning (ML) chip.

Specs and features are identical

Spec-wise, the Nest Mini and the Nest Wifi Point are the same: a quad-core 64-bit ARM CPU (1.4 GHz) with an ML hardware engine. “From a hardware perspective the specs that that generate and drive this system are the same,” Mark Spates, Google’s lead product manager for smart speakers, told VentureBeat. And feature-wise, they’re also identical. “The Nest Wifi Point has the Google Assistant built in, which means that it can do everything that Nest Mini can, in addition to ensuring that your home has great Wi-Fi coverage,” a Google spokesperson told VentureBeat. “If you’re looking to invest in a mesh system, the Assistant capabilities are an added bonus to your Nest Wifi Point.”

From a practical perspective, there’s no difference in Google Assistant functionality between a Nest Mini versus a Nest Wifi Point in your home. Given the pricing, it doesn’t make sense to purchase the Wifi Point just for smart speaker capabilities. Only do so if you’re buying a new Nest Wifi system already or if you have an existing Google Wifi setup (they’re backwards compatible).

For the record, the Nest Wifi Router is powered by a Qualcomm networking processor with the same CPU compute as the Nest Wifi Point and Nest Mini: 4 x A53 at 1.4GHz. The Nest Wifi Router, however, doesn’t have a separate ML chip. It has an ML subsystem block in the main processor instead. The embedded ML block is 300GOPS, however, compared to the 1TOPS on the Nest Wifi Point and Nest Mini. That’s because the router isn’t a smart speaker — ML on the router is used for routing functions and “future feature expansion,” a Google spokesperson told VentureBeat. The additional ML compute on the Point and Mini is used for the on-device Google Assistant functionality.

The benefits of an ML chip

Google doesn’t provide a definitive list for everything the ML chip on both devices handles. Spates said the team focused on media and home automation, but he did share four areas where users can expect faster responses from Google Assistant: alarms and timers, asking for the time, media initiation and music commands, and home controls (such as turning the lights on and off). “The team is experimenting and trying to look at other ways to expand that coverage,” Spates added. “The goal is to extend the things that we can execute locally over time. So the device continues to get faster and faster.”

“At launch, you should be able to start to ask these commands and as the assistant learns them, it will start to execute some of those things locally,” Spates added. “Things like alarms and timers, because they’re very static, those things should be fast right out the gate. Things that take a little bit more of like, ‘OK, what’s the name of the light’ or what genre or how you say ‘play music’ because people say it differently, it takes a little bit more time. But pretty quickly it learns and it starts to execute those locally as well.”

Google isn’t sharing how much faster users can expect these commands to be at launch nor how much faster they will become over time. Spates said that for media and home commands, the system should learn the command after two to four tries and speed up after that. “Hopefully you can feel the speed,” he said.

No plans for an offline mode

Even though they have an ML chip, both devices will not work without an internet connection. Google claims this is because the company wants to keep track of everything you’ve told Google Assistant on your My Activity page.

“We wanted to make sure that users still have full control and transparency of their interactions with the assistant,” Spates told VentureBeat. “And so, one thing that is critically important to that is that you can go to My Activity and you can see those items. And so, at a baseline we want to make sure that we allow users to see, even if it was executed locally or not, they can see those actions. If they want to delete them, or if they want to see what the system heard over time, no matter if it’s done locally or through the cloud, it’s important that information is always there for the user.”

This of course rings hollow. With the previous Google Wifi and Google Home Mini, it was not technically feasible to keep certain commands local. But now, if Google wanted to, it could make some commands work offline. The company could then add an explanation to the My Activity page that locally executed commands are not stored and not tracked, so there’s no option to delete them.

“We are always looking about how can we advance the device now that we have this new technology,” Spates said. “But it’s nothing that we have planned for the near future, so we don’t have that. So the device still needs to be online. Nothing to announce around an offline mode at this point.”