It would have been fairly easy for Roku to bring basic remote control functionality from its iPhone app to the Apple Watch, much as Apple did with its own minimalist Remote app years ago. Instead, the media streaming device maker today announced a surprisingly robust new remote control alternative for Apple’s wearable, effectively redefining what you can do from your wrist.

Bundled with version 6.1.3 of the Roku app for iPhones, the company’s Apple Watch app adds four core features, half of which are compatible with a wide number of Roku devices and TVs. The most basic of the features is a conventional directional pad and button-style remote control, as shown above, enabling users to navigate the menus and play or pause streaming content. Volume can be controlled with the Digital Crown.

Impressively, Roku adds to that a Channels launcher, automatically using data from each TV to provide a list of your current inputs and channels. They’re presented as wide, easy-to-press buttons with your customized names and icons, all organized with the most recently selected channels first. 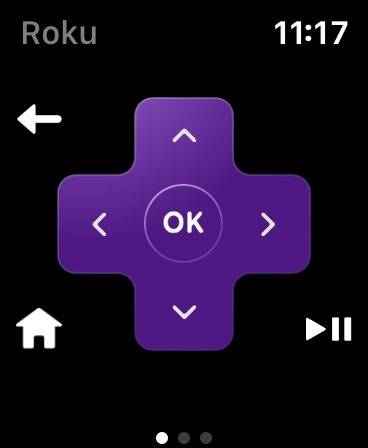 Select Roku devices, including Roku TVs and Roku Ultra boxes, also conjure up a Voice Search feature on the Apple Watch that can launch channels, switch inputs, and perform searches. In quick initial testing, this feature is more than a bit laggy and is seemingly dependent on the iPhone for relaying and processing voice requests — even when used with the fast Apple Watch Series 4 — but at least it’s an option.

The app also lets Roku Ultra and some Roku TV users locate their missing standalone remote controls. If your remote is supported — likely only Bluetooth remotes are — the Apple Watch can ping it and activate a chime, making it easy to unearth. You may want that remote for accessing content scrubbing buttons that aren’t included in the Apple Watch app.

Coming shortly after Roku added Apple TV+ support to its devices, the company’s initial Apple Watch offering is impressive in that it actually redefines expectations for a wrist-based media player remote control. It’s a more thoughtful approach to channel switching and multi-remote management than Apple includes for its own Apple TV remote options, even if it’s not as fast with voice commands as Siri. Moreover, the sheer convenience of having a powerful TV remote on your wrist at all times may well eliminate some users’ reliance on standalone or phone-based app remotes altogether.

As of press time, Roku’s Apple Watch app is currently available only with the free iPhone mobile app and isn’t yet appearing in the Apple Watch’s on-device store. If you have automatic Watch installs turned on for your iPhone, it will appear immediately after the iPhone app’s 53.5MB software update, but it can otherwise be installed manually using the iPhone’s Watch app.