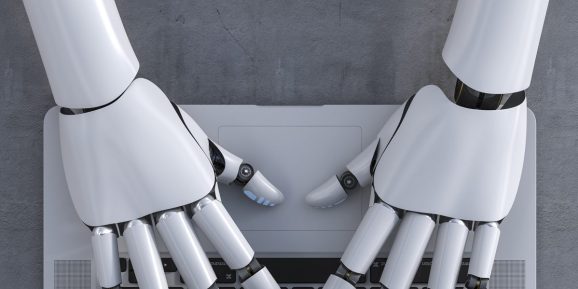 Filing a patent is the clerical equivalent of pulling teeth — at least in the U.S. It first requires inventors to determine the type of intellectual property (IP) protection they require (i.e., utility, design, or plant). Then they’re on the hook to conduct a United States Patent and Trademark Office (USPTO) database search for similar inventions. If and only if the novelty of their idea passes muster are they allowed to proceed to the next step, which is preparing an application and fees.

The system has motivated people like former aerospace engineer Dr. Stephen Thaler to turn to AI in pursuit of a better way. He, along with a team of legal experts and engineers, developed DABUS, a “creativity machine” that’s able to generate ideas without human intervention. A “critic” component within DABUS monitors the system’s idea-generating modules, enabling it to isolate and ripen those that evince the most utility. In August, three agencies — the USPTO, European Patent Office (EPO), and United Kingdom Intellectual Property Office (UKIPO) — received two patent dockets filed by Thaler’s DABUS. One is for a beverage container, and the other is for a light that flashes in a rhythm that’s hard to ignore.

It’s not unreasonable to say that DABUS has paved the way for AI invention systems yet to come — and opened something of a Pandora’s box in the process. At issue is whether AI qualifies as an inventor under statutes like the America Invents Act, which defines a filer as “the individual or, if a joint invention, the individuals collectively who invented or discovered the subject matter of the invention.” Some scholars argue that “individual” might be interpreted broadly to mean machines as well people and that denying an AI the right of conception could hinder innovation. But others assert that allowing AI to be credited with an invention might deter human developers who find themselves unable to compete.

But Dennis Crouch, associate professor of law at the University of Missouri School of Law, noted that most inventions today are computer-assisted, and that DABUS and similar programs could be perceived as the evolution of the paradigm. “The computer does some amount of the work — handling any complex math, assisting in visualization, and searching for solutions, and much more,” he told VentureBeat in an email. “In deciding who is the ‘inventor,’ the courts look to figure out what person instructed the computer to do the work, and also what person was the first to recognize a solution brought to them by the computer.”

However, critics like Brad Hulbert, founding partner with McDonnell Boehnen Hulbert & Berghoff, argue that the works of AI should be treated differently from those to which human inventors contributed. His reasoning? The standards of obviousness applied to human art are trivially easy for machines — and their makers — to exploit.

“Previously, a device or process could be patentable if it would not have been ‘obvious to a person of ordinary skill’ in the pertinent art,” he told VentureBeat in an email. “There is no answer yet as to whether such a ‘person of ordinary skill’ is an individual or a machine, [but the] more machines recognize the pattern that leads to invention, the greater the reason for the barrier for patentability to be raised.”

“Almost certainly, machines will keep getting better at pattern recognition,” he added.

The bar has already been raised in the European Union, where the European Patent Convention limits inventorship to “natural persons.” Interpreted humanistically, it precludes any patent author that is algorithmic in makeup (i.e., an AI system or software) from registering for IP protections in the region.

But it’s not inconceivable that an entrepreneur with the wherewithal to could skirt even those restrictions. Crouch offers a hypothetical: A perpetual trust for charitable giving is created with an AI as the beneficiary, and a banker or a lawyer as the trustee. The trust could hire a person — the “inventor” — with a contractual agreement to transfer all patent rights to the trust. This person would have some interaction with the AI, and they would always be the first human told about the AI’s newest inventions. In this arrangement, that human, rather than the AI, would legally be the first to conceive the idea.

For better or for worse?

But wait a minute, you might be thinking: Is AI that lessens the burden on inventors as dystopian as some are making it out to be? After all, only half of the patents submitted in the U.S. last year (roughly 300,000) were issued to their respective filers, while the World Intellectual Property Organization passed a record-breaking quarter-million filing mark in 2018 (a 3.9% increase over 2017). As of June 2011, it took the USPTO an average of 3.7 years to rule on a patent — and upwards of seven years for applications that were more complicated in nature.

If the parties producing and using AI inventors of the future act in good faith, they might streamline an approval pipeline that’s been gummed up by duplicative ideas. Pranay Agrawal, CEO and cofounder of analytics service provider Fractal Analytics, believes an AI in the loop could reduce costs and increase patent validation accuracy by lending a hand in literature review, plagiarism cross-checking, and fraud detection.

“[AI] frees up human beings to focus on more value-added tasks,” Agrawal told VentureBeat via email. “A human [and] AI can be a much more fruitful, productive, and happier combination in the patent approval process. Using AI to fight AI to reduce bad actors may be a way to go.”

But Hulbert points out that this optimistic pragmatism sidesteps sticky existential questions respecting AI’s agency — and the act of invention itself. “Of course, there are the unanswered philosophical questions of whether a machine (or the person who programmed the machine or who owns the machine) should be considered an inventor,” he said. “Another, more basic question arises from the increasing capability of AI: Do we still need patents to motivate the creation of (and sharing of information about) inventions when inventions are developed by machines?”

Equally problematically, there’s no guarantee that AI wouldn’t exacerbate the worst of today’s problems. Agrawal points to a study conducted by the Harvard Business Review that found patent trolls — companies that attempt to enforce patent rights against accused infringers beyond the patent’s actual value or contribution to the prior art — cost defendant firms $29 billion per year in direct out-of-pocket costs. Patent-writing AI deployed at scale could provide endless legal ammunition to trolls, for pennies on the dollar.

“In aggregate, patent litigation destroys over $60 billion in firm wealth each year. The nature of patents being filed will […] change in terms of applications, coverage, and fields — the barrier to entry is reducing,” Agrawal said. “[That’s why I] think it is important to remember that humans created AI. AI did not create AI; therefore, we should carefully consider the laws and permissibility surrounding AI’s rights.”

So is AI in patent law a force for good or not? It seems there’s no right answer — at least not now, in the tech’s early days. That’s why Agrawal advocates a cautious approach, entailing close oversight over (and if necessary, curtailing of) AI’s expanding capabilities.

“The current pioneers of any industry — Jeff Bezos, Elon Musk, Bill Gates, or any other founder or inventor who have created meaningful, impactful AI applications or technologies that solve large scale problems — are all humans leveraging the powerful AI algorithms and big data pipelines to make things work,” he said. “It requires behavioral understanding of humans, design thinking to holistically solve the problem, and drawing the contours of the problem to be solved to get to a much more focused and accurate answer.”