At Chrome Dev Summit in San Francisco today, Google shared its latest vision for the web. First, the company is trying to make loading disappear via instantaneous experiences. The company demoed Web Bundles, a new platform primitive that lets developers distribute their content across any format without a constant connection, and Portals, an experimental API that lets developers instantly give users access to their web experiences. Secondly, Google wants to have Chrome offer native app-like experiences. The Background Sync API will proactively cache web content and SMS Retriever adds two-factor SMS functionality to web apps.

With over 1 billion users, Chrome is both a browser and a major platform that web developers must consider. In addition to updates to the browser, however, Google also shared some resources for developers. The company today released the first 17 chapters of The Web Almanac, a holistic look at web performance and trends. Google says it collaborated with several experts to highlight the health of the web.

Dion Almaer, Google director of engineering, said the company wants to “make loading disappear, for all our users.” At its I/O 2019 developers conference in May, Google previewed Portals, which allows you to create seamless navigation experiences by pre-rendering content. Portals is now available behind a flag in Chrome. Google already has some early partners trying Portals on their sites — Fandango is one:

Web Bundles, now available behind an experimental flag, aims to let you distribute your web content across any format — email, FTP, or even USB. This means delivery of web content at faster speeds or even distribution when your user is offline. Google expects that through APIs like Background Periodic Sync and Content Indexing, developers will also be able to proactively cache and surface relevant web content even if you’re not on an active internet connection. Both APIs are now available as origin trials. 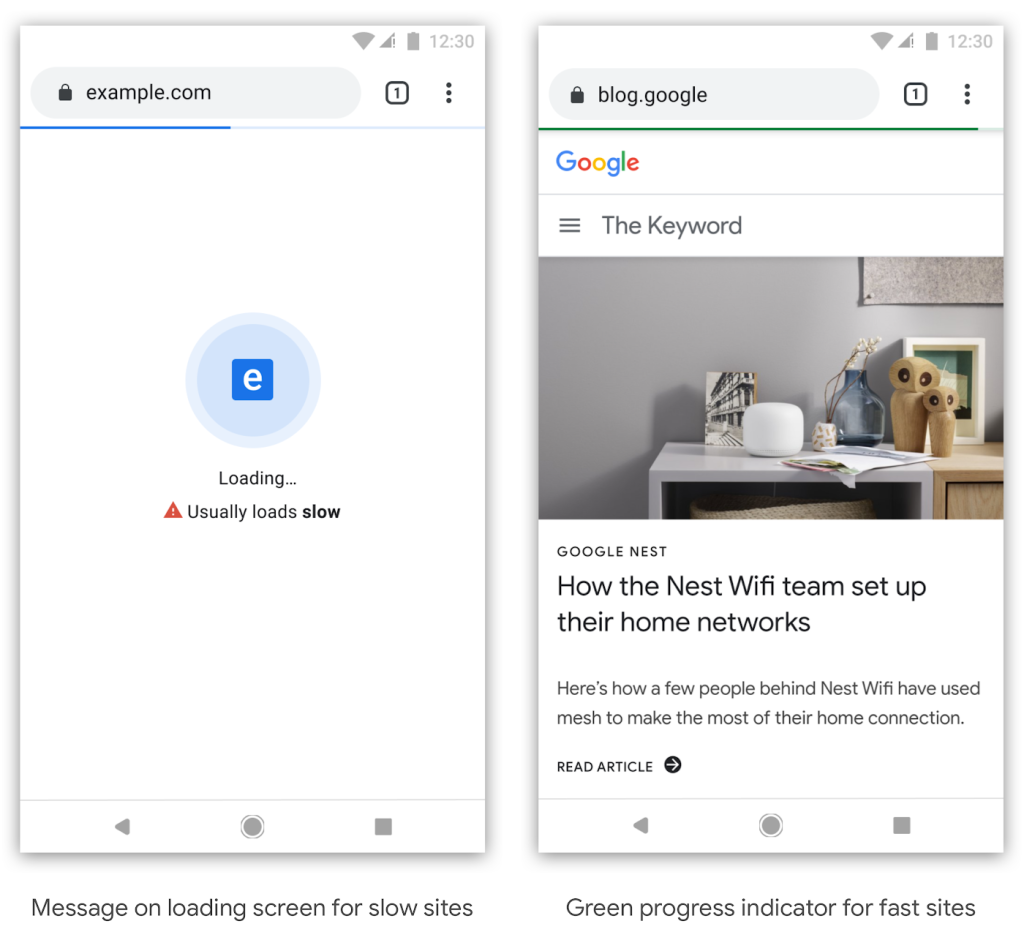 On top of this, Google is exploring ways to shame slow sites. “In the future, Chrome may identify sites that typically load fast or slow for users with clear badging.” The company is still experimenting with how these badges might appear, but the above is a possible example. Badging would identify when sites are “authored in a way that makes them slow generally, looking at historical load latencies.” Google may even expand this to include “identifying when a page is likely to be slow for a user based on their device and network conditions.”

In response to the mobile-first web in developing markets, Google wants to help developers create native-like experiences. The company is thus bringing primitives to web, including (available as an origin trial in Chrome):

Additionally, Google released new metrics including Largest Contentful Paint (how quickly users get to see the most meaningful page content) and Cumulative Layout Shift (how stable a page feels so users can start reading or interacting with its contents). The goal here is to give developers more ways of measuring their web apps.

“We believe that these metrics, chosen based on your individual use case, can provide a holistic view of real user experience to web developers,” Almaer said. “And as we look to reward developers who go the extra mile, we’re exploring ways to surface and highlight quality signals across Search and Chrome’s UI with speed as a core metrics. We’ll be sharing more in the coming months.”