Decades ago, Adobe introduced software that made printing less of a chore. Dyndrite believes it’s doing the same thing for 3D printing with its Additive Manufacturing software.

Seattle-based Dyndrite believes its Additive Manufacturing toolkit and build processsor will make 3D printing much easier and faster. Tapping the power of graphics processing units (GPUs), the company Accelerated Computation Engine (ACE) is a geometry kernel that makes it easier to move a file from design to 3D printing.

With GPU processing, a 3D printer can print a model in seconds, rather than hours. The software can take native CAD files and import them for 3D-printed output, and it has an integrated Python interface for scripting interactive workflows.

“There are parallels in our story with Adobe, which was one of the big Silicon Valley stories of the 1980s,” said Dyndrite CEO and founder Harshil Goel in an interview with VentureBeat. “Dot-matrix printing was terrible. One of the important things that enabled the desktop-printing revolution was Adobe. Their PostScript was a powerful computer language that essentially described a printer and the output. We are doing the same, describing a three-dimensional object for a 3D printer.”

Today’s 3D printer users are pushing the boundaries of additive manufacturing to improve efficiency, production throughput, and quality. Unfortunately, users have had to rely upon legacy formats, legacy applications, and incomplete vertical solutions that fall short of meeting the growing design, data, and production needs of market leaders. It’s like how hard printing on a dot-matrix printer was before Adobe.

“One key issue is the data explosion. So when you have basically all the 3D printers getting bigger and bigger, and the resolution is getting smaller and smaller, then you get a data explosion,” Goel said. “That’s where we come in. Imagine something like putting a serial number on a 3D-printed object. It is laborious and takes a long time. We can make that dramatically more efficient. Everything our software does is about performance.”

Dyndrite ACE engine and AMT build processor were designed from the ground up, leveraging modern methodologies and technologies to meet the requirements of production-oriented customers in the aerospace, medical, automotive, energy, and service bureau markets. Dyndrite enables users to manage terabytes of manufacturing data, print higher-order geometries (such as splines), and dynamically adjust parts in-situ to increase both throughput and quality.

“Altair is a global technology company providing solutions in product development, high-performance computing, and data intelligence. We have been a leading provider of enterprise-class engineering software since 1985, with a world-class reputation for delivering results for our customers — and they are developing the most demanding applications in the industry,” said Ravi Kunju, senior vice president at Altair, in a statement. “When you are working with more than 5,000 clients leading the way in design for automotive, aerospace, electronics, government, and defense, you had better deliver. And we are exploring Dyndrite as a promising component technology by being part of the developer counsel.” 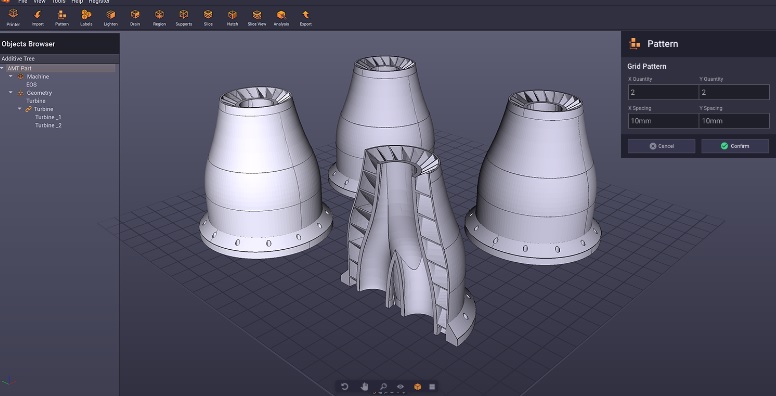 Above: The Dyndrite Additive Manufacturing Toolkit provides industrial technicians with a powerful, GPU-based build processor with an integrated Python API.

In addition, Dyndrite empowers hardware companies and software developers to build next-generation devices and applications. The Dyndrite architecture is a horizontal solution that provides a new foundation for software developers seeking to drive value across the varied and growing list of 3D printer manufacturers. Examples include MES, PLM, topology optimization, simulation, and other predictive printing technologies that inform users as to the ‘printability’ of objects.

In a separate release, Dyndrite also announced today the inclusion of simulation and topology optimization pioneers Ansys and Altair as the newest members of the company’s developer council.

The Additive Toolkit supports a wide variety of 3D printing processes, including DMLS/SLS/SLM and Binder Jetting. The company also works directly with OEMs to take advantage of and extend the unique characteristics of their printer.

Dyndrite’s backers include Google and Carl Bass. Goel researched the project for a long time but formed the company in 2017. It has raised more than $10 million to date.