The new service constitutes part of BMW Labs, a program BMW uses to test-drive new digital connected services, and is available now across the U.S. for all compatible BMW vehicles from 2015 onwards.

While you can already place food orders from your car with a smartphone, BMW’s offering is designed to make the process easier for those on the road, with only preconfigured orders available. This means you can only place repeat orders of your favorite foods and beverages, rather than perusing lengthy menus.

After clicking on the BMW Labs Online Ordering option in the main iDrive menu, users can click on Favorites or Recent Orders.

The driver or passenger can then order and pay by clicking a button. The navigation system will then offer to take them directly to collect the order at a drive-through. 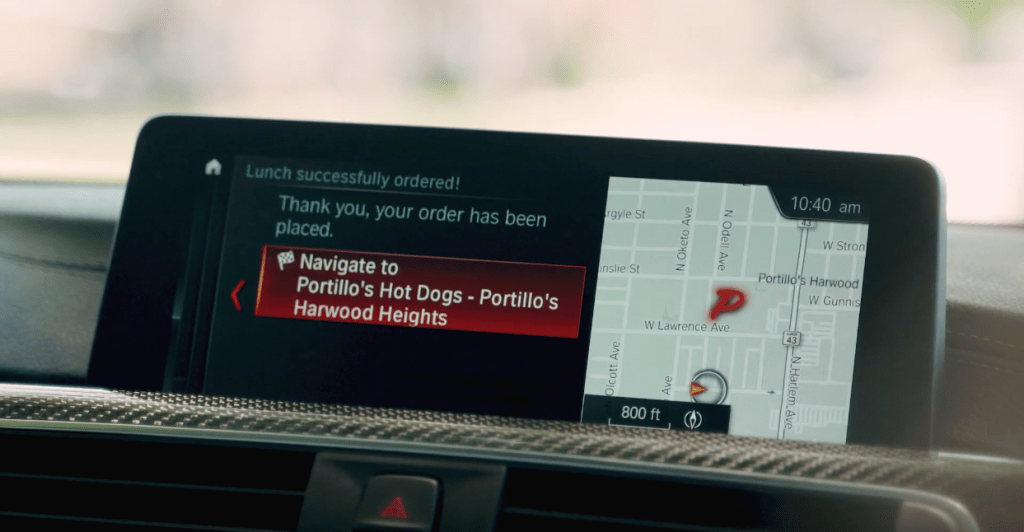 While the service is only an early-stage trial, voice control is an obvious omission. BMW is already embracing intelligence voice assistants, so it would make sense for drivers to order food with a voice command, rather than having to click through several menu options manually.

Founded out of New York in 2005, Olo has an online food ordering platform. While it might not garner the same attention as the likes of Uber Eats or GrubHub, that’s because it’s a slightly different proposition — Olo’s white-label service powers restaurant brands’ online ordering systems. As Olo puts it, it’s the “interface between restaurants and the on-demand world.” The company has raised around $80 million since its inception, with big-name backers including PayPal and Tiger Global Management.

There are only two brands on board for the initial pilot — Nekter Juice Bar, which offers a couple of dozen locations across California, and Portillo’s Hot Dogs, which has outlets spanning the U.S. But given that Olo claims some 70,000 restaurant brands as customers, including Applebee’s, Dairy Queen, Denny’s, Five Guys Burgers & Fries, and Shake Shack, it doesn’t take a great deal of imagination to realize this pilot could be expanded fairly quickly.

“Ordering lunch from the car with a push of a button — we’re living in the future,” proclaimed Olo marketing VP Jackie Berg in a press release. “The convergence of commerce and convenience is opening up exciting potential for restaurants, and we are thrilled to work with BMW and our pilot brands to experiment with how in-car ordering will evolve and shape how consumers order.”

It’s worth noting that BMW isn’t the first automaker to launch in-car ordering in the U.S. GM launched its in-dashboard marketplace back in 2017, offering an easy way for drivers to order food or drink on the go. BMW’s decision to join the mix serves as further evidence that cars offer lucrative inroads into targeted marketing, something GM refers to as “branded journeys.”

Indeed, in-car food ordering services are more than a simple utility for drivers. They effectively usher automakers into the marketing services realm — car dashboards offer the perfect channel for brands to deliver location-specific offers and promotions, with GM, BMW, and their ilk taking a cut of the transaction.