Google fired 4 employees today for alleged violations of company policy amid growing tension between organizing employees and management. A company spokesperson declined to comment on the terminations but confirmed the validity of a Bloomberg story on the subject. Rebecca Rivers said in a tweet today she was among those who got fired. Rivers took part in a protest with more than 100 people Friday outside Google offices in San Francisco where fellow Googlers demanded she be allowed to return to work.

Rivers, a software engineer who worked at Google offices in Boulder, Colorado, created and circulated a petition among Google employees calling for the company to stay away from contracts with federal agencies putting kids in cages like Customs and Border Protection (CBP) and Immigration and Customs Enforcement (ICE), both part of the U.S. Department of Homeland Security. 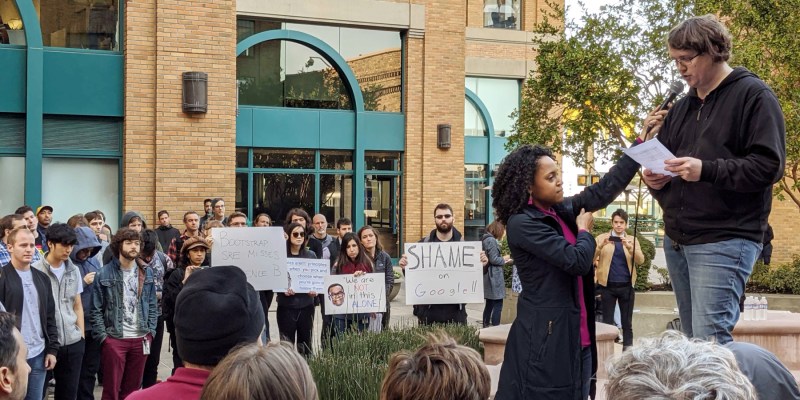 In the past year, Google employees have organized protests against the company’s practices related to arbitration, sexual harassment, the military’s Project Maven initiative for AI, and the treatment of LGBT users on YouTube.

The news follows a string of stories in recent weeks about changes underway at Google, including the end of weekly TGIF all-hands meetings and hiring an anti-union consultancy firm.

Rivers was initially placed on leave earlier this month alongside Laurence Berland, who was organizing labor at Google. A company spokesperson declined to state the names of employees placed on leave, but one employee was placed on leave for allegedly accessing and sharing need-to-know documents, and another placed on administrative leave for viewing and tracking calendars of members of Community Platforms, HR, and Comms teams.

In speaking at a protest Friday, Rivers said she did not access need-to-know files or share any files with members of the media. In his remarks Friday, Berland said calendars he viewed seemed to show a systematic effort to track Google employees organizing to demand the company change its practices.