(Reuters) — How much ride-hailing companies Uber and Lyft charge customers throughout a day is one of the most closely held secrets in Silicon Valley.

But a law in Chicago requiring the companies to disclose fare data shines a light on how at least one of the former “unicorns” is trying to turn a profit for the first time.

A Reuters analysis of the data shows fares for shared rides in the city have risen significantly over the past year, while fares for single riders have remained stable.

The price increases for shared rides predominantly affect Chicago’s low-income neighborhoods, which is where most of the carpool rides are booked, the analysis showed. Over this period of increased fares, carpool ridership fell. 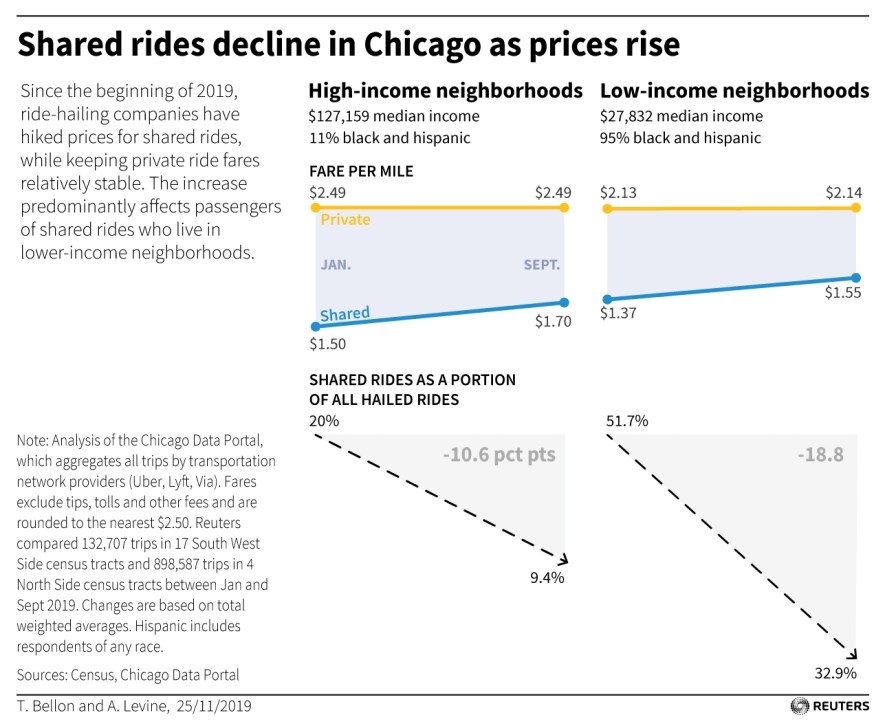 The Chicago data does not differentiate between rides operated by Uber Technologies Inc, Lyft Inc, or smaller ride-share rival Via. Data by Second Measure, which tracks credit card expenditures, estimates that Uber commands a roughly 72% market share in Chicago. The data also does not indicate whether similar strategies are being rolled out in other cities.

The fare changes in Chicago show an attempt to reduce discounts for customers in order to help convince investors that ride-hailing can be a profitable business model.

But the shift comes with political risks, as cities from Chicago to London take ride-hailing companies to task over congestion, driver treatment and passenger rights. On Monday, regulators in London stripped Uber’s license for the second time in just over two years, pending an appeal, over a “pattern of failures” on safety and security.

After reviewing the findings from the Chicago data, Uber said it has traditionally seen losses in its shared Pool rides segment. Earlier this month, Chief Executive Dara Khosrowshahi said Uber was “losing significant sums” due to heavy discounts on those rides.

“We want Pool to be available to as many people and in as many cities as possible, and to do that it has to be financially sustainable for years to come” through measures including pricing and better algorithms to find more pool riders, an Uber spokesman said.

Lyft declined to comment on its pricing strategy, but said shared rides have increased access to affordable and reliable transportation, particularly in neighborhoods under served by public transit and passed over by taxis.

Lyft said that given Uber controls nearly two-thirds of the Chicago market, the data most closely reflected Uber’s strategy, and noted its own data did not show a decrease in shared rides.

Via, the smallest Chicago player almost exclusively focused on shared rides with an estimated 1% market share, also declined to comment on pricing but said its own interpretation of the Chicago data was consistent with the analysis.

“In city after city, we have seen that there is far more price sensitivity with pooled rides than with private, single passenger ones,” Via said, adding that it was crucial for fees and taxes on shared rides to stay low in order to decrease congestion.

Chicago Mayor Lori Lightfoot has proposed taxes on ride-hailing services to combat congestion, by increasing the tax for solo trips and lowering taxes on shared rides. She also is pushing a new surcharge of $1.75 on weekday rides in the downtown area.

Chicago’s city council on Tuesday approved the congestion tax changes as part of the city’s 2020 budget.

Uber and Lyft, which have supported congestion taxes in New York and other cities, are fighting Lightfoot’s congestion proposal, calling it unfair for not including regular taxi services and disproportionately hurting lower-income residents.

They also said Lightfoot’s measure helps some of the city’s richest parts in the north, dominated by white residents, while hurting predominantly black and Hispanic residents on the South and West Side.

Lightfoot, Chicago’s first female African-American mayor, has rejected those claims, accusing Uber of stirring up racial tensions in opposition to the proposal.

Uber and Lyft put forward an alternative taxation plan that was rejected by the city as doing too little to ease downtown congestion. Uber in a statement said it wished Chicago would remove fees on shared rides altogether.

The Reuters analysis of more than one million Chicago rides between January and September 2019 – the only full quarters for which the city currently makes data available – found that fares per mile increased 13% for shared rides. But they remained unchanged for private rides.

Shared rides fell to about a third of all rides in a group of the least affluent neighborhoods of Chicago in the third quarter from about half of rides in the first.

Presented with Reuters’ pricing analysis, city representatives said they interpreted the data as an attempt by the companies to change customer behavior.

“We have real concerns about the claims these companies make because actually they’re the ones causing the pain to the communities in terms of cost, not the mayor’s plan,” said Rosa Escareno, Chicago’s Commissioner of Business Affairs and Consumer Protection who led the congestion policy.

Uber declined to directly comment on the city’s allegations, but said it made no sense that passengers in a solo taxi ride downtown will pay no tax while those taking a shared trip far from downtown will.

Lyft said the Mayor “is attempting to distract from what her plan will do: backtrack on her campaign promises and raise the cost of transportation in Chicago for communities who can least afford it.”