Lifecycle management might not be the most exciting software segment on the block, but it’s poised to grow from $50.7 billion in 2019 to $73.7 billion by 2024. That’s likely because it’s very useful to companies juggling solutions from multiple vendors. Case in point: Poorly managed projects are estimated to go over budget by 27%, on average, and project management initiatives to save companies 28 times more capital, owing to “more reliable” output from those projects.

Three years ago, entrepreneurs Matan Or-El and Meir Antar began developing an automated lifecycle management product to address challenges in cybersecurity. Their startup — Panorays — grew into a multimillion-dollar operation in a matter of months, with monitoring and alerting systems designed to map a company’s cyber posture without requiring installation or integration with third-party systems.

After a year in which New York-based Panorays saw 400% revenue growth and snagged the business of brands like Payoneer, Orbis, Clear Bank, Sapiens, Gett, Yes, Sompo, TestFairy, Clal Insurance, Monday.com, WalkMe, and Cimpress, the startup today announced that it has secured $15 million in series A funding. Oak HC/FT led the round, with participation from previous investors Aleph VC and former Palo Alto Networks CEO Lane Bess, which brings Panorays’ total raised to about $20 million.

The surveys, which feature wholly customer-selected questions, support conditionals for clarifying answers and flag “deal-breaker” responses implying problematic practices. They’re translated automatically into a supplier’s native language and used to tabulate a rating (from 0 to 100) to characterize a given vendor’s compliance. 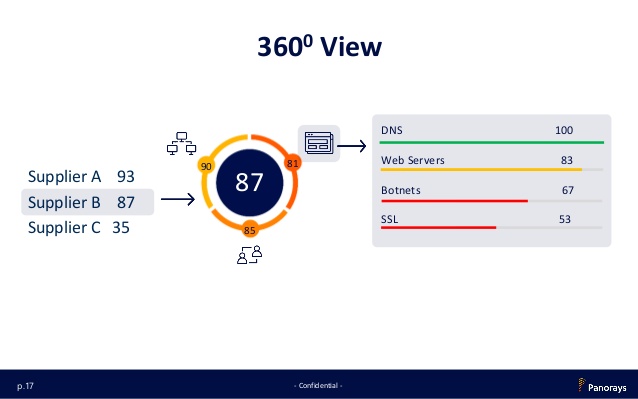 Elsewhere, Panorays checks suppliers’ readiness with respect to presence, network robustness, and app shielding. That is to say, it simulates the way a hacker would perform reconnaissance on a target by continuously analyzing and updating data from more than 1,000 public sources, as well as from Panorays’ own proprietary research. Additionally, it automatically detects previously unidentified vendors by considering anomalies and dark web data, which inform the ratings as a part of wider-ranging security inquiries.

Panorays helpfully lets third parties and companies dispute findings from within its platform, and if both validate the disputed finding and agree to reject it from the ratings, Panorays automatically reevaluates the company. On the remediation side, Panorays details any lapses it finds and provides guides with suggested fixes.

“The increase in data privacy regulations, including GDPR and CCPA, and the growing risk of supply chain attacks are changing the way companies approach data privacy and third-party cybersecurity,” said Oak HC/FT partner Dan Petrozzo, who plans to join the company’s board of directors. “Panorays is the only platform that enables companies to quickly and easily increase cyber resilience across their supply chains without operational delays. We’re proud to back the Panorays team as they continue to make security an efficient, integrated part of companies’ daily business operations.”