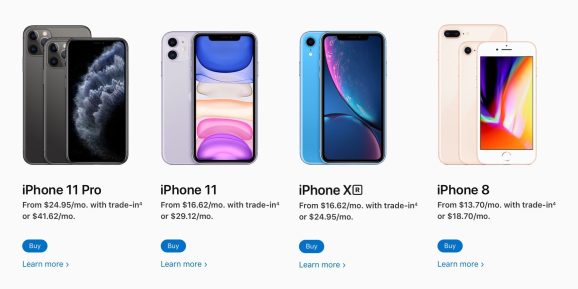 Matching an iPhone payment option that has proved popular with cellular carriers, Apple today added a new feature to its Apple Card credit card: Monthly Installments, a 24-month, 0% interest way to purchase any of the current iPhone models. The program seeks to bring more iPhone customers directly to the Apple Store for purchases, adding a 3% cash back incentive to sweeten the deal.

According to Apple, the Monthly Installments program can bring the normally high price of an iPhone 11 Pro down to only $24.95 per month over two years — assuming there’s an eligible older iPhone for trade-in. Without an older iPhone, the flagship model starts at $41.62 per month, while an entry-level iPhone 8 can be had for $13.70 per month with trade-in or $18.70 without. With this program, 3% of each payment will be returned to the customer for use on other purchases.

The only hitch for customers is that an Apple Card is required to take advantage of the offering. Apple has touted the rapid approval process for its credit card, offered jointly with Goldman Sachs, but has recently been criticized for its opaque approval process and for offering poor credit limit and interest terms to some consumers.

CEO Tim Cook had suggested during the company’s last earnings conference call that Apple was looking into programs such as Monthly Installments to bring the up-front cost of iPhones down. High pricing, particularly internationally, was widely blamed for a year of flat iPhone sales that started with the 2018 holiday season, leading Apple to lower the price of the iPhone 11 and offer more aggressive prices for lower-end devices.

The new program is only one of Apple’s incentives to bolster holiday sales at its own retail locations. As of now, the Apple Card’s automatic 3% cash back on purchases from the Store is temporarily being doubled to 6% during the holiday season, providing customers with an added incentive to make purchases — especially those paid in full — in the remaining weeks of the fiscal quarter. Apple also offered a brief Black Friday/Cyber Monday promotion with gift cards. Meanwhile, carriers have offered free or buy-one-get-one-free iPhone deals with old iPhone trade-ins and new line sign-ups, spurring upgraders to pick up the latest devices with heavy discounts.