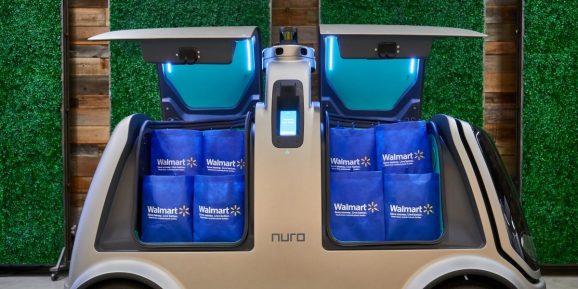 Nuro, a self-driving car company founded by two former Google employees, today announced a partnership with Walmart to deliver groceries to customers in Houston, Texas. This follows pilots in Scottsdale, Arizona that kicked off last August, first with a fleet of modified Toyota Priuses and then with Nuro’s custom R2 vehicle, and an existing delivery program with grocery giant Kroger in Houston.

Nuro says self-driving deliveries will initially be available to a select group of participants who have opted in to try the service. It will launch in the coming weeks, ahead of general availability sometime next year.

“Walmart’s dedication to its customers aligns with our desire to help people save time and money while making shopping easier. We are excited to join forces with Walmart to help provide the best possible delivery experience to customers,” said Nuro head of partner relations Cosimo Leipold. “Working alongside Walmart gives us an incredible opportunity to improve our door-to-door operations, serve Walmart’s loyal customers, and continue to integrate and engage with the Houston community.”

Once an order is placed, store employees will load the groceries into one of several compartments in either a self-driving Toyota Prius or Nuro’s thin, stout R1, which packs a proprietary mix of laser sensors, cameras, and computers. The R2 vehicles top out at 25 miles per hour and are fully driverless, although for now escorted by human-driven cars.

Walmart SVP of digital operations Tom Ward notes in a blog post that Walmart’s team of over 50,000 personal shoppers now fulfills deliveries from more than 1,600 stores. In addition to Nuro, the retailer previously worked with Ford and Waymo to deliver items from stores in Miami-Dade County and Arizona, respectively. More recently, Walmart revealed that it had teamed up with autonomous vehicle startup Gatik to test on-demand and scheduled warehouse order fulfillment.

“Walmart is committed to serving our customers whenever and however they choose to shop,” added Ward. “We are excited to work with Nuro and continue to learn as we are incorporating self-driving technology [into] our delivery options, learning more about our customers’ needs, and evolving Walmart’s future delivery offerings.”

Nuro was cofounded in 2016 by Ferguson and Jiajun Zhu, both veterans of the secretive Google self-driving car project that eventually spun out as Waymo. The Mountain View, California-based company has about 400 employees and 100 contract workers and has so far deployed over 75 delivery vehicles. In the coming months it plans to test 50 vehicles on roads in California, Arizona, and Texas, with safety drivers behind the wheel.