Despite people of a certain generation’s preference for texting, phone calls haven’t gone the way of the dodo. A recent survey of over 30 million calls conducted by Invoca found a 40% increase in calls across industries, and 75% of consumers say a phone call is the quickest way to get a response from businesses. Plus, phone calls have a 30% to 50% conversion rate, compared to only 1% to 2% for clicks on the web.

Taken together, it’s no wonder Waltham, Massachusetts-based speech analytics company CallMiner — the brainchild of Jeff Gallino, Cliff LaCoursiere, and Kim Brown — hasn’t had much trouble attracting customers and investors. In the roughly two decades since its rounding, the firm has inked deals with Sirius XM, Wayfair, Santander, and 400 other brands and raised tens of millions of dollars in venture capital. On that last note, CallMiner today revealed that it has secured $75 million in an investment round from Goldman Sachs, bringing its total raised to around $160 million.

CEO Paul Bernard says the funds will bolster the development of business applications, channel partner integration, international expansion, and platform innovation. “We are revolutionizing the way brands and people interact and conduct business — and it all starts with AI-driven customer insights and intelligence,” he said in a statement. 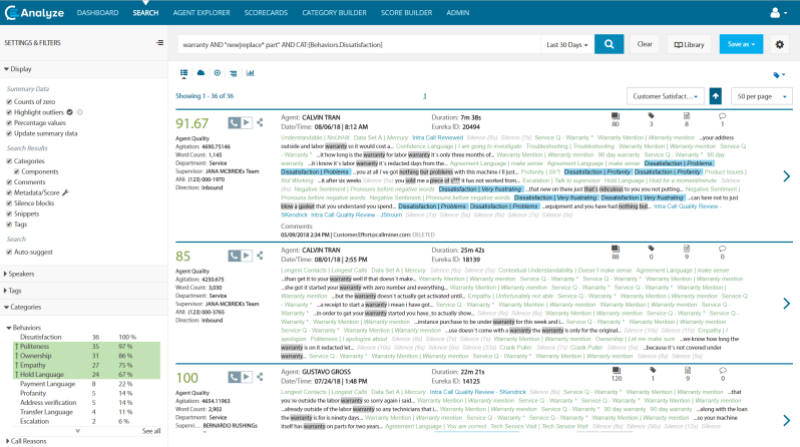 CallMiner’s marquee product is Eureka, an analytics suite delivering speech and text analytics for customer call centers. Leveraging AI and machine learning, it analyzes interactions across not only call channels but chats, emails, surveys, and texts to automatically uncover actionable intelligence. This intelligence comes in the form of performance scores tailored to objectives and transcriptions tagged with sentiment, search and share, and topic discovery, as well as customer service agent feedback. Eureka moreover provides conversation reasons, including behaviors, outcomes, and competitors, with the goal of diagnosing inefficient call handling.

On the sentiment analysis side, Eureka tracks the amount of physical stress in voices, as well as changes in that stress and rates of speech. More generally, it supports searches for pieces of conversational data, including the language contained within transcripts and the metadata or attributes associated with contacts. (On that subject, Eureka recognizes common query syntax, in addition to more specific filters, like the beginning 10% or first minute of a conversation.)

The complementary, cloud-based Eureka Coach provides role-based dashboards with automated scoring that both agents and supervisors can view. Alerts notify agents for guidance, with annotated call examples and a contact detail view that makes it easier to play calls back, with the ability to add comments, notes, and messages. Managers can customize the scoring by aggregating interaction metrics, including but not limited to category hits or weights, acoustic measures, and measures as metadata.

That’s the tip of the iceberg with respect to Eureka’s product offerings. Eureka Redact applies human-curated algorithms to detect and remove payment information and personally identifiable data from transcripts and audio recordings. As for Eureka Alert, it takes advantage of IP-enabled environments to capture speaker-separated audio in real time, while EurekaLive monitors call progress to provide helpful agent prompts.

The CallMiner platform supports premise-based or hosted integrations, and it’s highly scalable — the company says it processes 500,000 calls per hour and 1 trillion words per year across all calls, chats, emails, surveys, and texts. That sets it apart from rivals like Cogito and Observe.ai in the nearly $1.6 billion call center analytics market, according to Goldman Sachs Growth’s Holger Staude.

“The convergence of customer interaction analytics and customer experience creates a significant market opportunity,” said Staude, who plans to join the company’s board of directors. “Backed by a strong management team, CallMiner is well positioned to transform the way organizations operate. We look forward to partnering with their team and supporting their continued growth and success.”