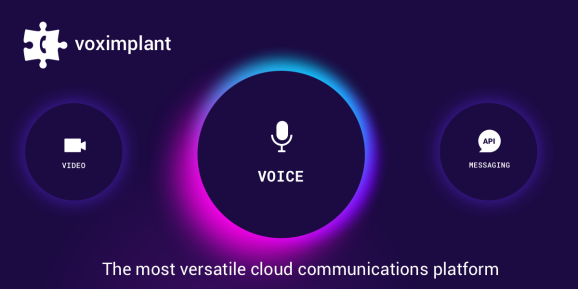 Can the cloud-based unified communications market, which is anticipated to reach $167.1 billion by 2025, be materially transformed by AI? Alexey Aylarov, Andrey Kovalenko, and Sergey Poroshin firmly believe so. They’re the founders of Voximplant, a startup developing products that imbue web and mobile apps with voice, text, and video chat. Voximplant provides the required infrastructure and tools, along with a backbone that’s handling upwards of 600 million calls per year.

Now, with 20,000 customers in six countries — including Atlassian, KFC, and Rappi — Voximplant has an eye on international expansion. Today it announced that it raised $10 million in a series B round led by Baring Vostok Capital Partners, with participation from RTP Global. This follows a $50,000 seed round in November 2017. CEO Aylarov says the funds will accelerate product R&D as the company’s workforce grows to more than 100 employees.

Voximplant is differentiated by its AI-powered Smartcalls product, a web service that lets clients create outbound call campaigns with voice recognition by uploading a contact list and configuring preferences. Leveraging tens or hundreds of phone lines simultaneously to place calls while transcribing answerers’ responses, Voximplant says it’s able to avoid voice mail inboxes with up to 98% accuracy, on average.

Smartcalls taps Google’s WaveNet technology for natural-sounding male and female voices in 15 different languages, and it ships with call processing templates for scenarios like promotions, surveys, notifications, and more. A reporting piece analyzes the content of calls to suggest ways conversion might be improved, while a separate analytics component funnels call details to managers through emails or SMS and optionally triggers actions via an API.

Beyond Smartcalls, Voximplant offers a range of products targeting communications operations in the banking, delivery and logistics, marketing automation, retail, travel, and ecommerce domains. One of those is click-to-call, which allows customers to embed call-initiating buttons into web apps with code. Programmable callback lets service center callers opt to be redialed when an agent becomes available. Automated push notifications for inbound calls enable apps to receive calls in the background or while suspended, and voice recording makes calls in high-quality storage formats available for posterity.

Voximplant competes with heavyweights like Twilio, as well as Plivo and Sinch. But Tony Jamous, former CEO and cofounder of Nexmo, which was acquired by Vonage in 2016 for $230 million, asserts that Voximplant’s extensive suite of services and nine-datacenter network pit it favorably against the competition.

“The … market is still in its infancy, shifting from the early adopters — digital-first businesses such as Uber and Airbnb — to the early majority. Enterprises now realize that they must use APIs to modernize the way they engage and communicate with their customers,” said Jamous. “Robust communication API platforms such as Voximplant can play a critical role in enabling this customer engagement transformation.”

Baring Vostok investment analyst Matvey Vinokurov will join Voximplant’s board of directors as part of this latest round of funding. RTP Global founder and senior managing director Kirill Sheynkman will join as a board observer. The Untitled ventures, an early investor in Voximplant, made an exit during the round.