It’s hard to find a tech company that isn’t attempting some sort of AI-related product, service, or initiative these days, but eBay went all-in by building its own AI platform, called Krylov. Sanjeev Katariya, eBay’s VP and chief architect of AI and platforms, described Krylov in an interview with VentureBeat: “At the very highest level, Krylov is a machine learning platform that enables data scientists and machine learning engineers to ship all different kinds of models for all kinds of data quickly into production, which gets integrated into user experiences that eBay ships globally.”

eBay representatives would not share how much money the company has put into Karlov. Even if they did, the hard costs — however significant they may or may not be — wouldn’t fully capture what eBay has invested to build the platform over years of internal organizational efforts around the globe. And after all that, eBay is now open-sourcing Krylov. Katariya described how the company built the platform and explained why he believes in open-sourcing it.

Why build an AI platform?

It’s fair to ask why eBay bothered to create an entire platform in the first place. There are other AI platforms out there already: An eBay blog post mentions some, including Google, Facebook’s FBLearner, and Uber’s Michelangelo.

“You’ve got the data pieces separately. You have bits and pieces of machine learning systems, and training systems. You have runtimes like TensorRT. But … when you need to ship a production system and make something work for your customers, you need to operationalize them, stitch them together, and build innovation into that system,” he said.

Katariya said that some of what eBay built in-house doesn’t exist anywhere else. And eBay does use some of the publicly available tools, “But we add our secret sauces to it.” 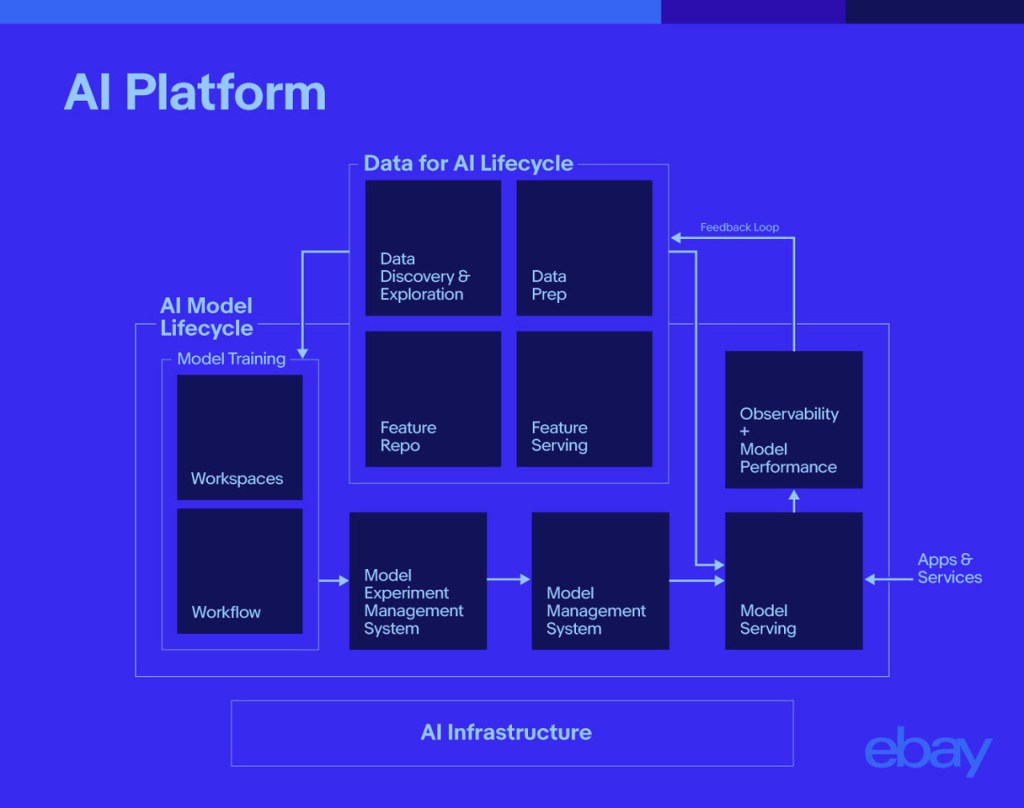 The company has a massive amount of data to handle — some 1.4 billion user interactions globally (up from 1.2 billion in March) across different languages, in about 190 markets. And then it has to train systems in a “distributed fashion” and enable both experimentation and production. With so much invested in hiring data scientists and engineers — again, the company wouldn’t share numbers — eBay needed to create a platform to maximize their efficiency and output.

Developing AI within a company is not a simple task — it’s been well documented that many AI initiatives fail. There are various reasons for this, along with plenty of advice on how to succeed. Yet there’s no real guidance for a company the size of eBay, with such grand ambitions. Katariya discussed how eBay approached the challenge of creating a unified AI platform in a company that wasn’t yet sufficiently unified. It’s a little bit of a chicken and egg problem, and it took years.

The first step was breaking down silos across the company. “In the beginning, things were done relatively in some degree of isolation. I won’t say that they were completely isolated, but there was a degree of isolation,” he said.

But eBay recognized that it had to bring together people who were distributed globally, first and foremost, and then set them up for success. “You have to provide the right tools, the right forum, the right practices, the right mechanics to bring these ideas together. It’s not only about code, but it’s about collaboration. It’s about agile practices,” he said.

eBay created what it called the Unified AI Initiative Core Team (ICT). It included people representing all parts of the eventual platform — in hardware, compute, network, storage, and data services — as well as the “AI domain teams,” which eBay defines as internal “customers” of the platform. These included people within eBay doing AI research and engineering in ads, computer vision, NLP, risk, trust, and marketing.

The company’s approach was what it describes as “internal open source,” promoting collaboration across geographies and departments that kept all parties close to their domain-specific tasks and problems while remaining connected to the larger effort.

As an additional incentive, eBay created the ML Engineering Fellowship program. It was essentially a way for engineers within the company to do a sort of internship, working on the AI platform under the tutelage of senior domain experts in machine learning engineering.

After all that effort and investment in an AI platform that should ostensibly start giving eBay some return on investment, it’s fair to ask why the company is going the open source route. Katariya said that diversity, of multiple kinds, is the impetus.

“One of the fundamental principles that we know, [that] we have leveraged, is that we have a global internal audience building a machine learning platform for us. With that comes the strength of diversity [of] thought and execution,” he said, pointing out that many of the components of the platform came from collaboration with global teams from Europe and Asia and other regions.

“Imagine doing that at the company level, of discovering that in diversity lies great power. Now let’s extend that to planet Earth and open-source it,” he said. “Not only will we be solving an eBay issue or challenge, we will be extending the goodness to the rest of the planet, and we expect that to just evolve kind of [at a] very rapid rate,” he said.

Katariya comes off as completely believable and earnest when he says these things. But serving humanity is never the sole goal of a for-profit company. There are business reasons for eBay’s decision to open-source Krylov.

“At the end of the day, we at eBay are all about bringing about a global marketplace with computer vision and machine translation and natural language processing and personalization recommendations. We want to bring our best to our users. We want to revive retail stores, mom and pop businesses. We want to give them AI,” he said. And the company wants to constantly grow its base of users and customers.

“When [we] increase the velocity of our sellers, we can give them new technologies to sell faster … and really discover the value that we have to offer. This is the platform that makes that happen,” he added.