Google, Amazon, Apple, and other technology companies have teamed up to develop a smart home connectivity standard that makes it easier for software and devices to play ball across the smart home ecosystem.

Connected Home Over IP, as the new working group is called, will be spearheaded by the Zigbee Alliance, a group of companies that develop and maintain the ZigBee standard, which enables close-proximity devices (e.g., light switches, smart speakers, locks) to talk to each other in the home.

Smart home devices can use any number of protocols, such as Bluetooth, Wi-Fi, Wireless USB, Z-Wave, and ZigBee. Google also develops two open source protocols, called Weave and Thread. All of these various protocols have inherent benefits and may appeal to equipment manufacturers and IoT system makers for different reasons, but manufacturers have to invest considerable resources to ensure their devices will work with all the others. So the working group is setting out to achieve a common standard for the smart home, based on internet protocol (IP).

The global smart home market is shaping up to reach $175 billion by 2025, and all the big tech companies are investing heavily in the industry. Google sells a host of connected contraptions under its Nest brand, Amazon has created everything from connected speakers to microwaves and clocks, and Apple is continuing to invest in its Siri-infused HomePod smart speaker. Given that consumers may procure a range of connected devices, apps, and cloud services for their home from multiple companies, a common standard is in everyone’s best interests.

“The goal of the Connected Home over IP project is to simplify development for manufacturers and increase compatibility for consumers,” Apple said in a separate statement. “The project is built around a shared belief that smart home devices should be secure, reliable, and seamless to use.”

Other members of the ZigBee Alliance, including Samsung SmartThings, Ikea, NXP Semiconductors, Signify, and Silicon Labs, will also be joining the working group and contributing to the standard. All the companies involved will contribute some of their technologies, including Google’s IP-based Weave and Thread.

While it’s too early to say what will emerge from this collaboration, the fact that the major players spanning hardware, software, and the cloud have elected to participate is notable. A cross-platform open standard that any company could use — with no licensing fees — may be just the thing to take smart home technology to the next level. 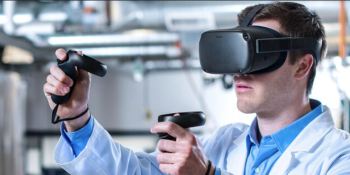