The Consumer Electronics Show (CES) typically signals the arrival of new smart home appliances, and this year is certainly no exception. To this end, Moen today debuted a voice-activated faucet and water detector in its growing U by Moen product line, complementing its digital shower system that recently gained support for Google Assistant.

The family flagship — the U by Moen Smart Faucet — lets users start and stop water flow with their voice. They’re also able to perform other tasks through digital assistants, including Alexa and Google Assistant, or take advantage of the wave sensor to turn the water off with a simple hand gesture. The LED built into the wave sensor changes color from blue to purple to red to indicate when the water is heating or cooling, while a handle on the side of the faucet offers manual control over temperature.

Moen claims the Smart Faucet — which is available in finishes and styles that range from modern (Align, Nio, Sleek) to transitional (Arbor, Essie, Paterson) and traditional (Brantford, Weymouth) — is the only voice-activated kitchen faucet on the market to offer voice- and hands-free activation regardless of the manual handle position. Voice commands enable the precise dispensation of water at specified temperatures, as well as preheating. Customers who’d rather not control their kitchen faucets with voice commands can opt to use the Moen app for Android and iOS, which allows for the creation of an unlimited number of presets and optionally monitors water usage (including historical dispensation and temperature) over time.

Moen’s other headliner is the aforementioned 3.5-inch water detector — aptly dubbed Flo by Moen Smart Water Detector — that’s designed to fit in areas of the home where risk might exist, like the basement or laundry room. It alerts owners to abnormalities in moisture and humidity via companion apps and plays nicely with multiple detectors and the Flo by Moen Smart Water Shutoff, a valve that connects to main water supply lines, to prevent water damage. 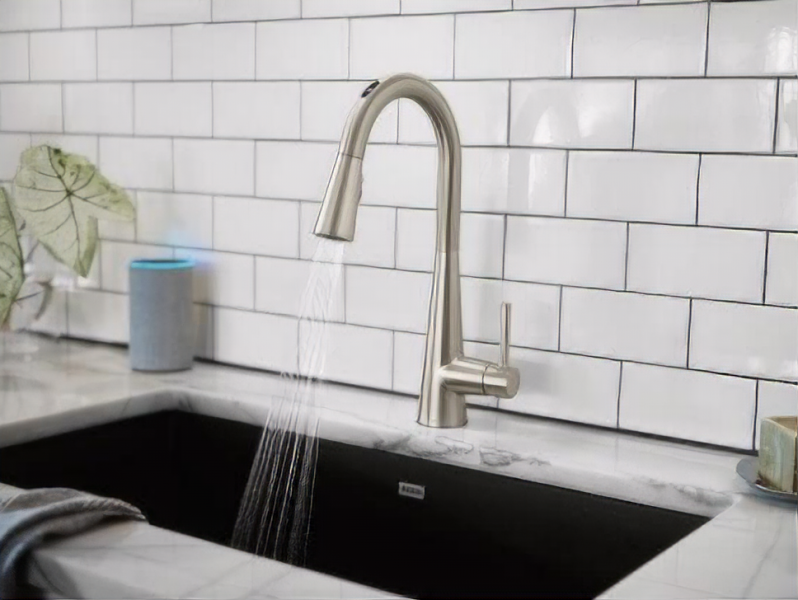 “Moen is revolutionizing how consumers think about the water in their homes,” said Moen senior vice president Mark-Hans Richer in a statement. “This year, we’re leading the industry to new places — all to enhance people’s experiences with water while enabling them to control and conserve it without sacrifice. Consumers have never had this kind of power before, and we’re excited to be the ones giving it to them.”

Moen’s continued pursuit of connected devices fits nicely into the burgeoning internet of things market. According to Statista, the total installed base of IoT-connected products is projected to amount to 75.44 billion worldwide by 2025, a fivefold increase in 10 years. The smart kitchen appliances market alone was valued at $890 million in 2018, and it’s projected to reach $4.850 billion in the next five years.