Climate change is becoming a heated topic in tech. Tech giants like Amazon, Apple, and Google have talked about their efforts to become carbon neutral for certain parts of their business, in their datacenters, or in certain countries. Microsoft today made a bold claim: The company has pledged to become carbon negative by 2030. The announcement came at an event titled “Microsoft’s commitment to sustainability.” As part of the push, Microsoft CEO Satya Nadella announced a new $1 billion Climate Innovation Fund “to accelerate the development of carbon reductions and renewable technologies.”

“The scientific consensus is clear — the world today is confronted with an urgent carbon crisis,” Nadella said onstage. “If we don’t cut emissions and temperatures continue to climb, science tells us the results will be devastating. Each of us is going to need to take action. And that includes businesses. No one company can solve this macro challenge alone, but as a global technology company we have a particular responsibility to do our part. That’s why today, we’re announcing an ambitious new plan to help address the sustainability of our planet. Today we’re making the commitment that by 2030, Microsoft will be carbon negative.”

Microsoft’s emissions are about 4 million metric tons per year. If you include the company’s entire supply chain, the materials in its buildings, the business travel of employees, and the full life cycle of its products (including even the electricity its customers may consume when using the products), Microsoft estimates another 12 million metric tons. That’s the number, 16 million metric tons, Microsoft is going to undercut by 2030. 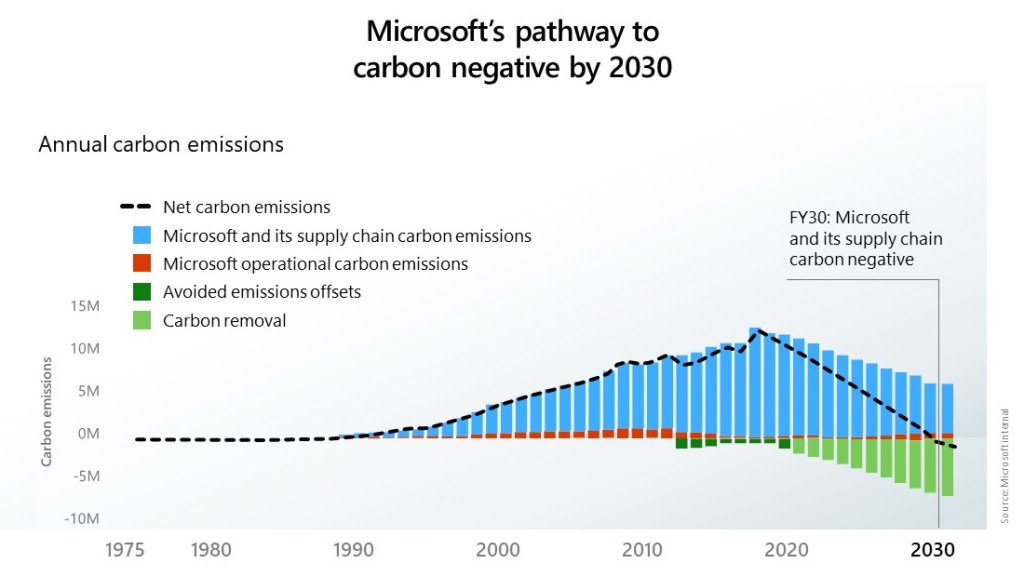 But Nadella didn’t stop there. Microsoft wants to remove more carbon than it emits. By 2050, Microsoft expects to remove all of the carbon emitted “directly or by electrical consumption since our company’s founding in 1975,” said Nadella.

Microsoft’s Climate Innovation Fund aims to accelerate the global development of carbon reduction, capture, and removal technologies. The fund consists of $1 billion invested over the next four years into new technologies and people working to address climate change.

Microsoft plans to deploy this capital in two areas:

More specifically, investments will be based on four criteria: strategies that have the prospect of driving meaningful decarbonization, climate resilience, or other sustainability impact; additional market impact in accelerating current and potential solutions; relevance to Microsoft by creating technologies it can use to address its unpaid climate debt and future emissions; and consideration of climate equity, including for developing economies.

Relatedly, Microsoft has an AI for Earth program, which provides cloud-based tools and AI services to organizations looking to tackle problems relating to climate change. The company added today that it will continue to invest in carbon monitoring and modeling projects through this program, which has grown over the past two years to support more than 450 grantees. Also today, Microsoft released the Microsoft Sustainability Calculator, a Power BI app that shows carbon emissions data associated with your business’ Azure services.

Microsoft is promising a lot today, and it’s frankly unlikely the company will hit its audacious goals. But we don’t have to wait a decade to see if the company is on track. Microsoft plans to publish a new annual Environmental Sustainability Report that will detail its “carbon impact and reduction journey.” By 2025, Microsoft promises to shift to 100% supply of renewable energy for all its datacenters, buildings, and campuses. Anyone will thus be able to check in annually and see where the company is on its roadmap.