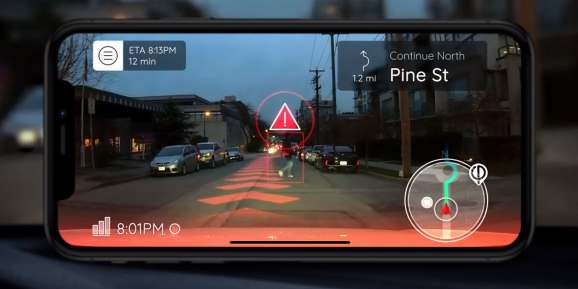 Phiar, a Palo Alto-based startup that is using artificial intelligence and augmented reality to enhance vehicular navigation, is finally making its long-awaited AR driving app available for the first time — albeit in a limited fashion. The company today announced the start of a private beta program for iPhone users, and plans to expand the program to Android devices later in 2020.

Founded by experts in computer vision and machine learning, Phiar spent 2018 and 2019 raising funds and developing its mobile app, which is designed to serve as an augmented navigational head-up display (HUD) that sits on a car’s dashboard. Instead of filling a phone’s screen with a 2D or 3D map, the app can superimpose guidance lines, arrows, and icons atop live camera feeds of streets.

Phiar notes that the app automatically picks visible AR overlays by looking at the road, lighting, weather, and objects present in the live video, drawing pathways using either lines or higher contrast patterns that will be more visible as you drive. It also uses AI for lane segmentation, semantic segmentation, and 3D localization, allowing the app to determine and draw a proper navigational route through multi-lane streets. The user can then just follow the suggested path, as well as seeing floating icons that indicate points of interest and traffic signals.

One key to these tricks is on-device edge AI processing rather than reliance on cloud servers. “Currently, we’re the only solution in the market running highly advanced AI on the edge for AR navigation use cases, which is ideal for both consumer apps and also automotive integration scenarios that we’re also exploring as well,” Phiar VP of strategy Nasser Iravani said.

At the start of the private beta, users will be able to experience the AR- and AI-enhanced first-person navigation mode, as well as a traditional map view with live traffic overlays. An upcoming release of the app will also include a voice search feature that enables users to identify destinations using address or place name, location alarms for arrivals or departures from specific spots, and icons that identify and warn against live hazards such as pedestrians.

It’s worth noting that Phiar’s implementation appears to be more advanced than Google’s Live View, which debuted in preview and beta forms last year, though both companies have focused — so far — on mobile device-specific navigation solutions. At CES earlier this month, Phiar suggested that it’s exploring the possibility of integrating its technology directly into vehicles with windshield displays, as well.

Users interested in testing Phiar’s app today must have an iPhone 7 or later model, and can apply to join the private beta at this link.