The developers of Half-Life: Alyx answered questions about the game on Reddit.

To save you rummaging through the Reddit thread, we’ve summed up all of the responses in one place.

SDK is not releasing alongside the game

The team is “not currently planning on shipping a full SDK.” They said it may come at some point, but it would be a lot of work at the moment, when they could be polishing the game instead. “Source 2 is a new toolset, much of which hasn’t been previously released. … Generally, this is how we’ve done SDKs in our previous Source 1 titles as well — making the game takes precedence, and after that’s done, we start looking at what’s next.”

The developers joked that “Valve Time,” a running joke about the studio’s delays, happened during the pre-announcement development cycle and the game is on track for its March release. “With the exception of some tweaks to the absolute final scene, the game is done. Lots of us at Valve, as well as playtesters, have played through the entire game multiple times. Right now we’re primarily polishing and fixing bugs, which is where we’d hope to be at this point in the development cycle. We’re confident we’ll hit our intended release.”

The developers also noted Half-Life: Alyx is comparable in length and content to Half-Life 2. Interestingly, the Half-Life: Alyx development team consists of around 80 people, which is the largest single team that has ever worked on a Valve project.

“Working on HL:A before we announced it was pretty worrisome. I have a teenage son, and for 4 years I’ve refused to tell him what game I was working on, because I knew he wouldn’t be able to keep it to himself. On the team we joked that releasing the game was much less scary than announcing it. But in the end, we are very happy with how it’s been received, and we’re really excited to get it finished and into your hands.”

The developers confirmed that more gameplay videos are on the way before release. These will also showcase movement options and other VR-specific elements.

The developers also confirmed there will be a train ride in the game. “It’s actually illegal to ship a Half-Life game if you don’t spend at least a little time riding in a train.”

They also talked about how classic Half-Life monsters and enemies, like Barnacles, Head Crabs, and Combine soldiers, will work in VR. “Barnacles are a threat in VR. They don’t kill you instantly. You’ll deal with them in familiar ways, but the opportunities afforded by VR also give you new methods to use against them.” 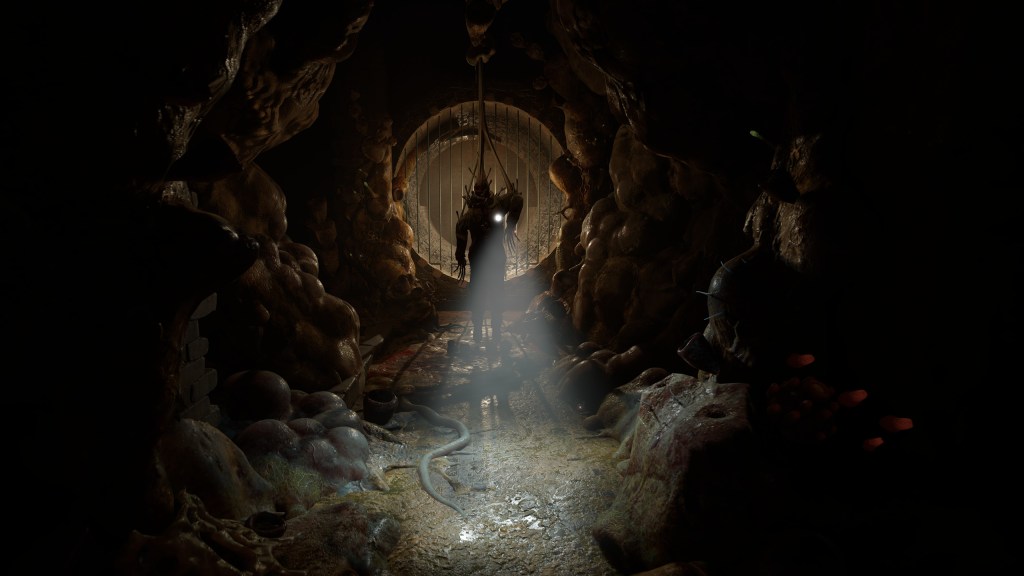 Above: This looks spooky.

“We experimented with moving the player, but moving the player without their input in VR didn’t work very well. As with many aspects of working on this game, we’ve had to find new ways to take well-worn mechanics and other Half-Life staples into the specific framework of VR.”

“You can put a bucket on a headcrab, and it’ll move the bucket as it crawls around. Playtesters all keep reporting it as a bug.”

“Similarly, Combine soldiers definitely return, both in the form you’ve previously seen them as well as with new variations to keep players busy and take advantage of VR. Some creatures respond to audio more than others. We don’t want to spoil anything, but there’s an example of this we’re particularly excited about.”

It looks like UploadVR’s Jamie isn’t alone when it comes to VR horror – one member of the Alyx team admitted he struggled to play through headcrab sections. “I admit I cannot deal with headcrabs in general, and definitely not in VR. If I’m testing the game, and I’m in an area where I know one of those things is around, I’ll remove the head set and hold it off my face as I attempt to navigate on the 2nd monitor screen, to lessen the impact of headcrab discovery.”

“Disappointingly for me, it seems that I’m the only one on the team who can’t deal, we handle the scarier parts pretty well in terms of making the game accessible. Horror is part of the franchise, and through playtesting, we feel like we’ve gained some confidence about where to draw this line. Some of our gorier visuals tend to evoke a grim fascination rather than revulsion or panic, and apart from myself, we’ve hardly ever seen anyone nope out of a playtest, even during the creepier sections. So among testers I still seem to be the outlier on horror tolerance.”

“For instance, if you need to get past an obstacle like a crate, you mantle up rather than jump up. The only time you need to jump is to traverse a short gap, which happens very rarely. We tried a few iterations of jumping, but ultimately found that even in continuous motion, players preferred dealing with those jumps with a teleport-style movement.”

“We worked with Merle [Dandridge] at the beginning of HL:A development, but in the end, felt we wanted to go in a different direction. We love Merle, her work in Half-Life 2 was instrumental in bringing Alyx to life, and we hope to work with her again in the future.”

The team also reconfirmed that Alyx, the titular, playable character of the game, will speak. A speaking, playable protagonist is not overly common in VR games, let alone in Valve games. In the Half-Life series (and the Portal series), the playable protagonists have traditionally not spoken at all. 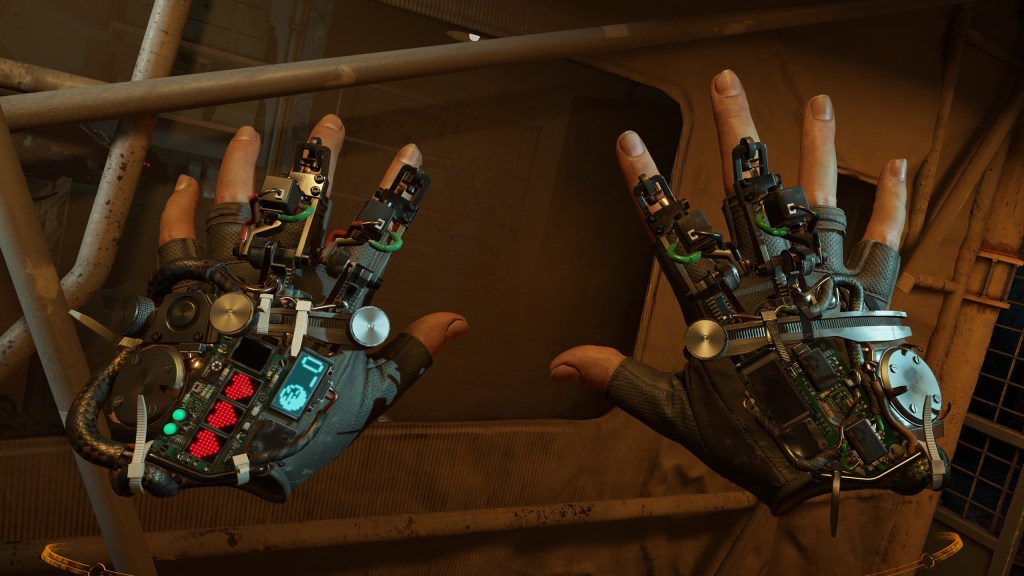 Above: These hands are made for bashing headcrabs.

The developers confirmed you can use one hand for all weapons, but a second hand can optionally be used to steady weapons. “We really wanted to focus on simultaneous two handed play throughout the game, so we needed the player to always be able to easily have a free hand. We keep that hand pretty busy with gravity gloves, movement, world interactions, flashlight, and so on.”

They also stated that the inventory systems are designed to keep the focus on the environment as much as possible. “We have an ‘over the shoulder’ contextual inventory system for ammo on your off hand, Your weapon hand has a quick weapon select feature, and we have a couple of wrist bags for some of the other items.”

Some people brought up the lack of arms (and only hands) in the Half-Life: Alyx reveal trailer, which Valve addressed in the AMA. “We don’t render arms due to our experiences with playtesting – briefly, we found that players themselves don’t notice them missing (spectators do, obviously), and they don’t like them obscuring their view.”

“We actually simulate invisible arms though, which connect from your hands back up to your HMD, and we use those to detect impossible things, like completely closing a drawer over your wrist. We’re planning on releasing a video going into the tech behind our VR hands / interactions / etc, so there’ll be more on this soon.“

Meanwhile, when it comes to finger tracking on the Index: “Index controller finger-tracking allows for greater player expression and more opportunities for fine-grained engagement with the world. But the game was tested with all major VR solutions throughout development to ensure full compatibility for all required interactions.”

This is something we had mostly already heard before. The YouTube channel Tested even got to try Half-Life: Alyx out at Valve HQ and compare how the game plays differently on each headset.

Likewise, the team “are huge fans of commentary and definitely plan on producing it for HL:A but it’s unlikely that [they] will have it in for launch day.”