Three years ago, in an effort to compete with increasingly sophisticated advanced driver assistance systems (ADAS) like Tesla’s Autopilot, GM debuted Super Cruise, which it characterized at the time as the world’s first “true hands-free driving technology for the highway.” Using a combination of high-definition map data, a driver attention monitoring component, and an array of radars and 360-degree cameras, Super Cruise enabled semiautonomous driving on limited-access freeways for both long drives and daily commutes.

But Super Cruise was first only available on the Cadillac CT6 sedan, and then later on the 2020 CT5 sedan. Today, GM announced that the upcoming 2021 Cadillac CT5, CT4, and 2021 Escalade will ship with Super Cruise as an optional upgrade package. The automaker says this version of Super Cruise will be substantially more capable than the previous generation, with the ability to change lanes on compatible highways upon request when “conditions are appropriate.”

“This is our most extensive update we’ve made to Super Cruise since its debut,” said Super Cruise chief engineer Mario Maiorana in a statement. “We have made a number of improvements to make Super Cruise more intuitive, better performing, and more accessible for our customers.”

GM — which claims the enhanced Super Cruise was made possible by a vehicle platform with more electrical bandwidth and processing power — notes that the user interface and hands-free driving dynamics have been improved, as well as the algorithms and rear-facing sensors that enable Super Cruise to track rear vehicles. These work together to ensure the system holds its lane and changes only when a wide gap exists — at least in theory.

The moment Super Cruise is engaged, drivers will be able to tap or fully latch the turn signal to indicate they’d like to switch lanes. This will prompt the system to look for an opening in the indicated lane while taking time to let other cars know a lane change is imminent. While it does so, it will populate the gauge cluster with messages indicating when the lane change has begun or whether it’s currently unavailable. The car will merge when Super Cruise determines that the lane is safely open. 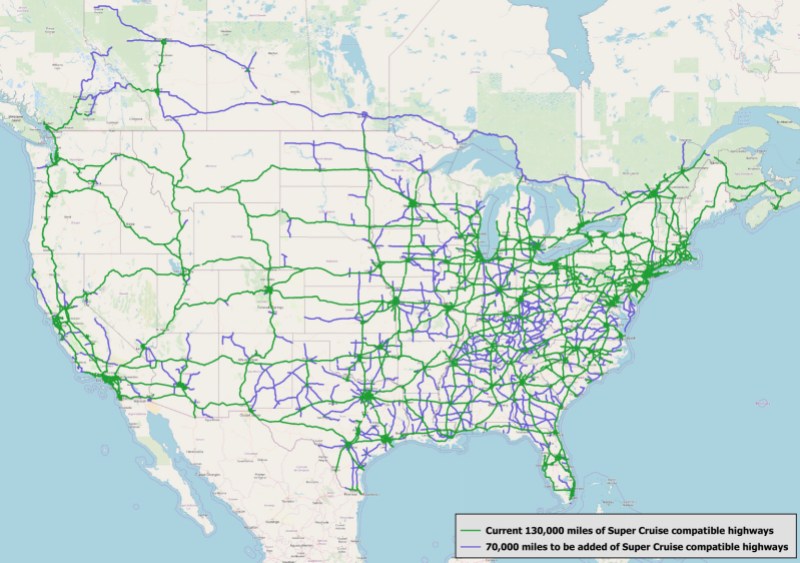 This latest Super Cruise iteration boasts a GPS that provides 4-8 eight times more precise location data than traditional GPS, along with map data of select highways updated on a quarterly basis over the air. The driver attention system, which consists of seven hardware modules in total, uses a small camera located on the top of the steering column that works in conjunction with infrared to determine the direction of the driver’s gaze. (If a driver takes their eyes off the road for too long, the system will ask them to pay attention or retake control, using audible alerts or a bright steering wheel light.)

In related improvements, GM says turn handling, steering, and speed controls have been streamlined from the last firmware. (Super Cruise previously gained a lane offset that enables it to adjust slightly in its lane for driver comfort when passing large vehicles.) Now, Super Cruise works on more than 200,00 total miles of compatible highways in the U.S. and Canada, up from 130,000 miles as of April 2019. That’s in addition to “most highways” in China, courtesy of maps supplied by Beijing-based navigation and location-based services provider AutoNavi.

But independent reviews of Super Cruise have painted a favorable picture of the in-car experience. In its first-ever benchmark of automated driving systems, Consumer Reports put the ADAS ahead of Tesla’s software, followed by Nissan’s ProPilot Assist and Volvo’s Pilot Assist.

GM says that around 30% percent of Cadillac CT6s are equipped with Super Cruise, and that customers are engaging the system around 50% of the time when available. It also volunteered that 70,000 total miles are driven weekly — and over 5.2 million miles in total — using the ADAS, and that over 85% of current CT6 owners said they’d prefer or only consider a vehicle equipped with Super Cruise.

The automaker previously said it plans to bring Super Cruise to other GM brands. like Chevrolet, GMC, and Buick, after 2020.