Google has lifted the lid on a new project from within its experimental Area 120 lab, giving the live music industry big data-powered insights on fans.

Demand, as the platform is called, is designed to identify the best locations for touring, to optimize ticket pricing, and to enhance marketing and sponsorships around live shows. To do so, it gives professionals from the live music industry access to aggregated data spanning Google’s own platforms, including Google Search (via Google Trends) and YouTube, as well as proprietary data from third parties including concert industry trade publication Pollstar.

By way of a brief recap, Google launched its Area 120 incubator back in 2016, serving as a hub for Google employees to develop fledgling ideas into something bigger. Successful “graduates” include Touring Bird, a web app that collates attractions and tours from top travel destinations around the world — launched originally back in 2018, Touring Bird was folded into Google’s core travel product a few months ago. Other recent Area 120 projects include Tangi, a social video sharing app focusing on DIY help videos that officially debuted last week.

Demand is the handiwork of Parag Vaish, who previously worked in roles at big companies including Microsoft, StubHub, and Tesla, and Nick Turner, a former rock drummer who later worked in various roles in the music and digital industries. Both Vaish and Turner joined Google’s Area 120 in 2018 as “founders in residence.”

Streaming has fundamentally changed the music industry, but not just in terms of how music is consumed as a format. Crunching data can help tailor music recommendations, for example, while it is also changing how music is created in the first place — artists are now optimizing their songs for streaming. But one of the other big changes ushered in by the advent of streaming is that live music is looking healthier than ever, as access to a wider range of music on-demand drives people to see more artists in the flesh.

But how can artists know which venues to perform at and in which cities, to optimize their ticket sales? Again, data can help, but agencies responsible for selling live shows often have limited access to all the historical and real-time data that matters. This is what Demand is setting out to solve.

“There’s no big data at play [in the live music industry] today,” Turner told VentureBeat. “William Morris Endeavor [a renowned talent agency] only has the sales data for their artists, Live Nation has the data for their artists. So everyone’s looking at their own data, but there’s nothing that combines all this data in a shaker and then reveals it in this way.”

“The secret sauce [in Demand] is the combination of data and the insights that can be derived from multiple different data sources,” Vaish added.

Demand is going to market with a minimal viable product (MVP) aimed at any music industry professional who is responsible for the success of artists — that could be a manager, agent, promoter, or record label. The product is broadly divided into four core elements, covering artist trends, ticket pricing, announcement efficiency, and audience insights.

In terms of artist trends, Demand leverages search data from Google Trends, which includes what artists people are searching for regionally on Google across the U.S. However, rather than looking at everyone who is simply googling for information on an artist, it focuses on those who are searching for live shows for a specific artist. Moreover, it’s possible to add four similar artists for comparison purposes, to illustrate relative search behavior and see what is “normal” or what is standout. The Demand platform also combines this with YouTube viewing data, which gives further insights into how popular an artist is across regions.

While it’s true that music-streaming data can give an indication of the popularity of a particular artist in an area, actively searching for concert tickets signifies real intent, which makes that data particularly valuable. YouTube viewing data, also presented by region, helps augment the broader picture in terms of artist demand.

“Listening behavior tends to be fairly passive in terms of purchase intent, whereas search behavior is very specific and purchase intent,” Vaish said. “So our hypothesis was that if we can organize the understanding of consumer interest and consumer demand as per Search and YouTube, and make that available at the time when people are making very pivotal decisions about concert touring, then that could positively impact consumers.”

The upshot is, a tour promoter responsible for Harry Styles can look at data for around 210 district metro areas across the U.S. and choose their preferred tour stops based on the patterns and trends that they see. 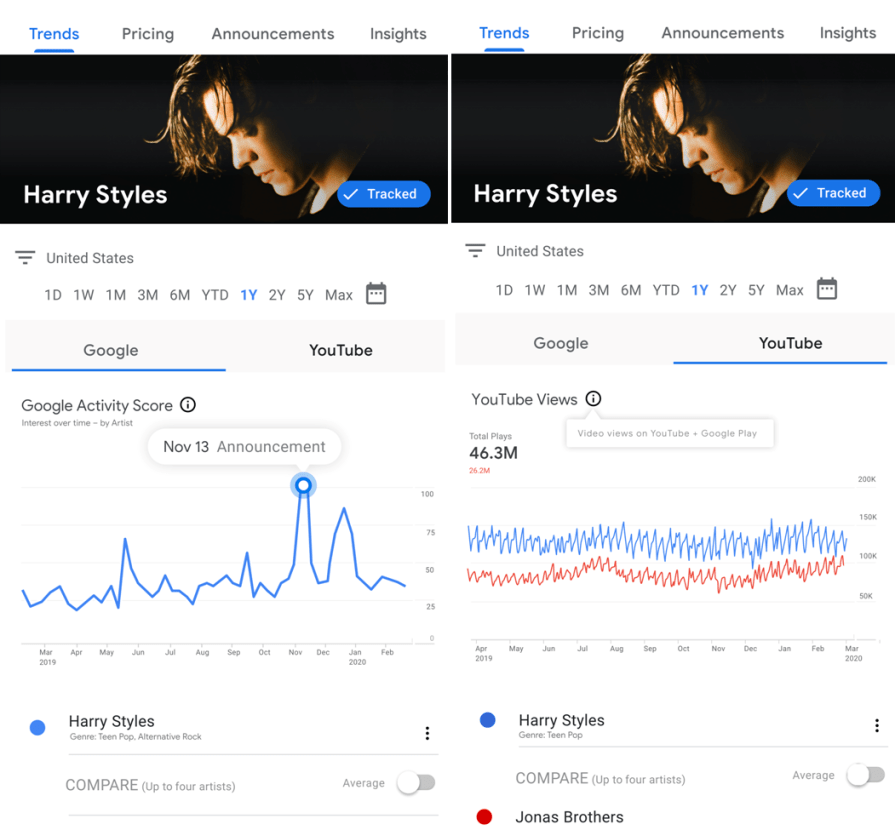 The problem that this ultimately solves has been tackled through other technological means over the past decade or so. A growing number of bands have taken to crowdfunding their gigs, so that if they manage to secure a certain number of ticket pledges for a given location, then the band can lock in the concert and charge the fans — it’s all about figuring out demand before committing to playing somewhere, and maximizing revenues.

The Demand platform ultimately achieves the same thing, except it uses big data at scale, gleaned from multiple sources, to set a tour schedule.

Another key facet of the Demand platform centers on ticket pricing, with users able to view historical and real-time ticket sales data for both the primary and secondary (resale) markets. Again, tour promoters or managers can compare their artist(s) with other similar artists for the same location, and see what their minimum, average, and maximum ticket prices were — and whether they managed to sell all their tickets.

Tying into this is announcement efficiency, which shows the real-time activity surrounding an artist’s ticket sale announcements, which can be used to influence marketing, pricing, and other planning initiatives. Again, this can be benchmarked against other similar artists in the same locations.

Using this data, those responsible for marketing an artist can see whether they have been pricing their tickets too far off the market rate. They could observe that there simply isn’t enough interest in a particular city for an artist — conversely, if there is significant demand, this could mean putting on extra dates at the venue.

By leveraging Google’s data, Demand can also help promoters unlock other valuable insights into their artists’ fan base — this is what it refers to as “audience insights.”

For example, Demand can show that a typical fan of singer-songwriter Lizzo generally has a stronger interest in a particular brand — such as Nike, Vogue, or Victoria’s Secret — relative to the U.S. national average. This opens up a whole new world of opportunities, both for the artist and for brands looking to align themselves with suitable artists. This element of the Demand platform is still open to iteration as part of the initial MVP launch, but it could open up new channels for sponsorships, product placements, and so on.

“I think there’s a number of different scenarios that we probably don’t fully grasp at this point,” Vaish explained. “You can see how maybe a placement on a TV show might be a good a good scenario, or the halftime performance at a specific [sports] game.”

Demand was officially unveiled today at Pollstar Live, an annual gathering of professionals from the live entertainment industry. Besides its data-licensing partnership with Pollstar, Demand has also been working with Full Stop Management in the build-up to today’s formal launch, which has included analyzing the tour schedules for big-name artists including Bon Jovi, Maroon 5, and Harry Styles.

“The industry changed today,” said Tim Leiweke, CEO of Pollstar’s parent company Oak View Group. “The launch of Demand gives industry insiders greater insight into how an artist is positioned in the marketplace, provides new advertising and sponsorship data, and is a predictor of the success or failure of a tour.”

Demand is aimed at artists of all sizes, from established rock giants to indie upstarts, and it will be available for no extra cost at first — the longer term business model is not yet set in stone.

“Demand will serve as the ‘great equalizer’ for the live music industry,” Turner said. “While the biggest managers, promoters and agents will have access to the analytics, so too will the rising artist and smaller venue owner. Our hope is that access to this data will nurture the rise of new artists and new opportunities across the live music spectrum.”