When my son was a toddler, he went to his pediatrician for a routine CAT scan. Easy stuff. Just a little shot to subdue him for a few minutes. He’d be awake and finished in a jiffy.

Except my son didn’t wake up. He lay there on the clinic table, unresponsive, his vitals slowly falling. The clinic had no ability to diagnose his condition. Five minutes later, he was in the back of an ambulance. My wife and I were powerless to do anything but look on, frantic with worry for our boy’s life.

It turned out that he’d had a bad reaction to a common hydrochloride sedative. Once that was figured out, doctors quickly brought him back around, and he was fine.

But what if, through groundbreaking mixtures of compute, database, and AI technologies, a quick round of analyses on his blood and genome could have revealed his potential for such a reaction before it became a critical issue?

What if it were possible to devise a course of treatment specific to him and his body’s unique conditions, rather than accepting a cookie-cutter approach and dealing with the ill effects immediately after?

And what if that could be done with small, even portable medical devices equipped with high-bandwidth connectivity to larger resources?

In short, what if, through the power of superior computing and next-generation wireless connectivity, millions of people like my son could be quickly, accurately treated on-site rather than endure the cost and trauma of legacy medical methods? 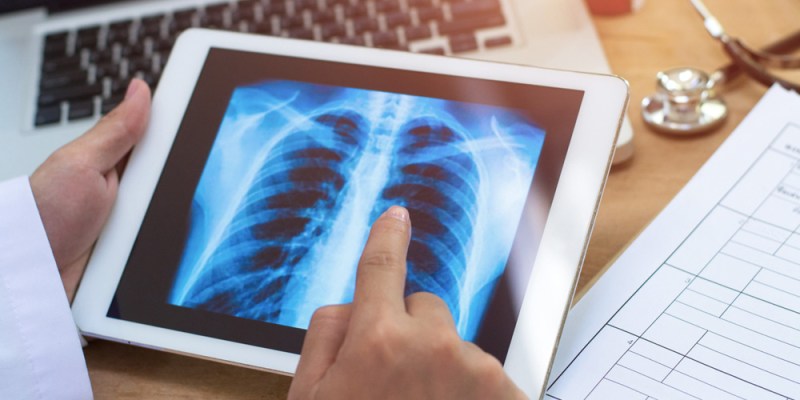 Above: Pinpointing diagnosis and treatment that’s right for you.

These questions I asked about my son are at the heart of today’s efforts in precision medicine. It’s the practice of crafting treatments tailored to individuals based on their characteristics. Precision medicine spans an increasing number of fields, including oncology, immunology, psychiatry, and respiratory disorders, and its back end is filled with big data analytics.

Pairing drugs to gene characteristics only covers a fraction of the types of data that can be pooled to target specific patient care.

Consider the Montefiore Health System in the Bronx. It has deployed a semantic data lake, an architecture for collecting large, disparate volumes of data and collating them into usable forms with the help of AI. Besides the wide range of data specific to patients collected onsite (including from a host of medical sensors and devices), Montefiore healthcare professionals also collate data from sources as needed, including PharmGKB databank (genetic variations and drug responses), the National Institute of Health’s Unified Medical Language System (UMLS), and the Online Mendelian Inheritance in Man (human genomic data).

Long story short, the Intel/Cloudera/Franz-based solution proved able to accurately create risk scores for patients, predict whether they would have a critical respiratory event, and advise doctors on what actions to take. 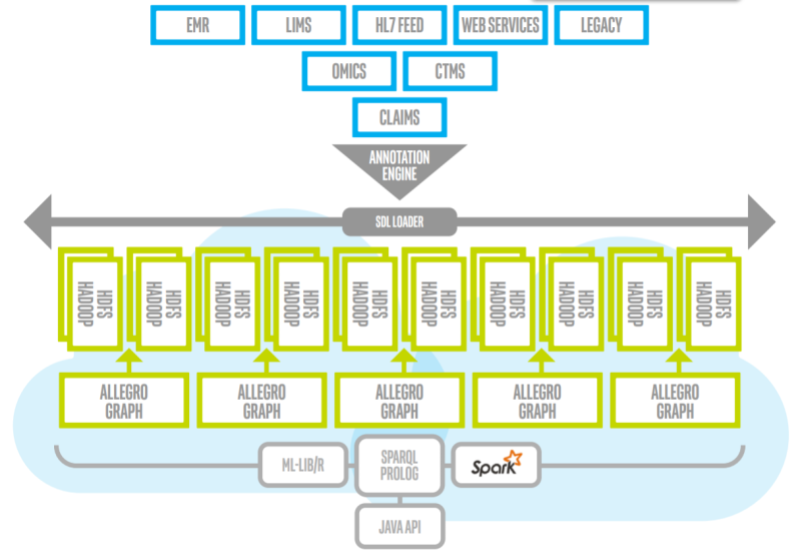 “We are using information for the most critically ill patients in the institution to try and identify those at risk of developing respiratory failure (so) we can change the trajectory,” noted Dr. Andrew Racine, Montefiore’s system SVP and chief medical officer.

Now that institutions like Montefiore can perform AI-driven analytics across many databases, the next step may be to integrate off-site communications via 5G networking. Doing so will enable physicians to contribute data from the field, from emergency sites to routine in-home visits, and receive real-time advice on how to proceed. Not only can this enable healthcare professionals to deliver faster, more accurate diagnoses, it may permit general physicians to offer specialized advice tailored to a specific patient’s individual needs. Enabling caregivers like this with guidance from afar is critical in a world that, researchers say, faces a shortage 15 million healthcare workers by 2030.

What it will take. (AI, for starters)

Enabling services like these is not trivial — in any way. Consider the millions of people who might need to be genetically sequenced in order to arrive at a broad enough sample population for such diagnostics. That’s only the beginning. Different databases must be combined, often over immense distances via the cloud, without sacrificing patients’ rights or privacy. Despite the clear need for this, according to the Wall Street Journal, only 4% of U.S. cancer patients in clinical trials have their genomic data made available for research,  leaving most treatment outcomes unknown to the research and diagnostic communities. New methods of preserving patient anonymity and data security across systems and databases should go a long way toward remedying this.

One promising example: using the processing efficiencies of Intel Xeon platforms in handling the transparent data encryption (TDE) of Epic EHR patient information with Oracle Database. Advocates say the more encryption and trusted execution technologies, such as SGX, can be integrated from medical edge devices to core data centers, the more the public will learn to allow its data to be collected and used.

Beyond security, precision medicine demands exceptional compute power. Molecular modeling and simulations must be run to assess how a drug interacts with particular patient groups, and then perhaps run again to see how that drug performs the same actions in the presence of other drugs. Such testing is why it can take billions of dollars and over a decade to bring a single drug to market.

Fortunately, many groups are employing new technologies to radically accelerate this process. Artificial intelligence plays a key role in accelerating and improving the repetitive, rote operations involved in many healthcare and life sciences tasks.

Pharmaceuticals titan Novartis, for example, uses deep neural network (DNN) technology to accelerate high-content screening, which is the analysis of cellular-level images to determine how they would react when exposed to varying genetic or chemical interactions. By updating the processing platform to the latest Xeon generation, parallelizing the workload, and using tools like the Intel Data Analytics Acceleration Library (DAAL) and Intel Caffe, Novartis realized nearly a 22x performance improvement compared to the prior configuration. These are the sorts of benefits healthcare organizations can expect from updating legacy processes with platforms optimized for acceleration through AI and high levels of parallelization.

Interestingly, such order-of-magnitude leaps in capability, while essential for taming the torrents of data flowing into medical databases, can also be applied to medical IoT devices. Think about X-ray machines. They’re  basically cameras that require human specialists (radiologists) to review images and look for patterns of health or malady before passing findings to doctors. According to GE Healthcare, hospitals now generate 50 petabytes of data annually. A “staggering” 90% comes from medical imaging,” GE says, with more than 97% unanalyzed or unused. Beyond working to use AI to help reduce the massive volume of “reject” images, and thus cut reduce on multiple fronts, GE Healthcare teamed with Intel to create an X-ray system able to capture images and detect a collapsed lung (pneumothorax) within seconds.

Simply being able to detect pneumothorax incidents with AI represents a huge leap. However, part of the project’s objective was to deliver accurate results more quickly and so help to automate part of the diagnostic workload jamming up so many radiology departments. Intel helped to integrate its OpenVINO toolkit, which enables development of applications that emulate human vision and visual pattern recognition. Those workloads can then be adapted for processing across CPUs, GPU, AI-specific accelerators and other processors.

With the optimization, the GE X-ray system performed inferences (image assessments) 3.3x faster than without. Completion time was less than one second per image — dramatically faster than highly trained radiologists. And, as shown in the image above, GE’s Optima XR240amx X-ray system is portable. So this IoT device can deliver results from a wide range of places and send results directly to doctors’ devices in real time over fast connections, such as 5G. A future version could feed analyzed X-rays straight into patient records. There, they become another factor in the multivariate pool that constitutes the patient’s dataset, which in turn, enables personalized recommendations by doctors.

What we’re dealing with

By now, you see the problem/solution pattern:

The U.S. provides a solid illustration of the impact of population in this progression. According to the U.S. Centers for Disease Control (CDC), even though the rate of new cancer incidents has flattened in the last several years, the country’s rising population pushed the number of new cases diagnosed from 1.5 million in 2010 to 1.9 million in 2020, driven in part by rising rates in overweight, obesity, and infections.

All in one day

Intel created an initiative called “All in One Day” to create a goal for the medical industry: take a patient from initial scan(s) to precision medicine-based actions for remediation in only 24 hours. This includes genetic sequencing, analysis that yields insights into the cellular- and molecular-level pathways involved in the cancer, and identification of gene-targeted drugs able to deliver the safest, most effective remedy possible.

To make All in One Day possible, the industry will require secure, broadly trusted methods for regularly exchanging petabytes of data. (Intel notes that a typical genetic sequence creates roughly 1TB of data. Now, multiply that across the thousands of genome sequences involved in many genomic analysis operations.) The crunching of these giant data sets calls for AI and computational horsepower beyond what today’s massively parallel accelerators can do. But the performance is coming.

As doctors will have to service ever-larger patient populations, expect them to need data results and visualizations delivered to wherever they may be, including in forms animated or rendered in virtual reality. This will require 5G-type wireless connectivity to facilitate sufficient data bandwidth to whatever medical IoT devices are being used.

If successful, more people will get more personalized help and relief than ever possible. The medical IoT and 5G dovetail with other trends now reshaping modern medicine and making these visions everyday reality. A 2018 Intel survey showed that 37% of healthcare industry respondents already use AI; the number should rise to 54% by 2023. Promising new products and approaches appear daily. A few recent examples are here, here and here.

As AI adoption continues and pairs with faster hardware, more diverse medical devices, and faster connectivity, perhaps we will soon reach a time when no parent ever has to watch an unresponsive child whisked away by ambulance because of adverse reactions that might have been avoided through precision medicine and next-gen technology.