Carbon Relay, which is based in Boston and Washington, D.C., today announced that it has closed a $63 million funding round led by Insight Partners. This brings its total raised to roughly $70 million, following a $5 million series A in January 2019. CEO Provo said the proceeds will fuel the company’s growth as it continues to expand its market presence.

“We created the first AIOps solution for optimizing applications in Kubernetes environments to enhance application performance while also dramatically reducing infrastructure costs. We’ve been gratified by the interest in the platform from across the cloud-native and Kubernetes communities,” Provo said in a statement. “Working with Insight Partners will enable us to rapidly scale [our] platform at a time when thousands of organizations are looking to enjoy the full benefits of moving to a microservices architecture.”

Carbon Relay’s marquee product, called Red Sky Platform, uses AI and machine learning to drive Kubernetes app performance gains and cost reductions by assessing multiple factors to determine deployment choices and then implement them automatically. It recalculates on the fly to maintain performance as conditions change — in part by running deployment experiments and trials under load — while playing nicely with existing systems from Splunk, Redis, Oracle, Google, Amazon, Alibaba, IBM, Cisco, and others. 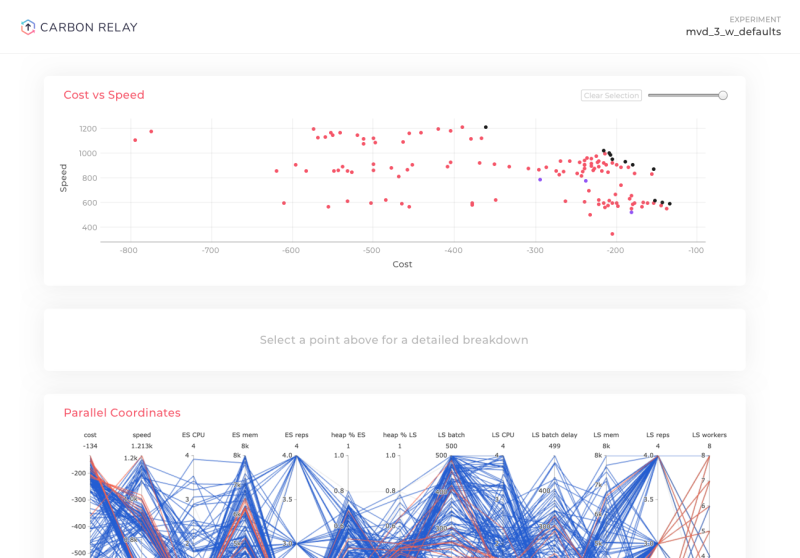 The Enterprise version of Red Sky Platform, which supports up to dozens of trials per experiment, adds automatic generation and implementation of machine learning-powered suggestions for resource scheduling and configuration settings.

“We’re pleased to work with the Carbon Relay team to enable the rapid expansion of the company’s groundbreaking platform,” said Insight Partners managing director Michael Triplett. “As Kubernetes moves into mainstream use, development and operations teams across industries are attracted to its flexibility. At the same time, they’re dismayed by how difficult it is to use. Carbon Relay has brought together a team of world-class machine learning and engineering experts to bring to market an innovative solution to the challenge of Kubernetes complexity. The Insight team is excited to collaborate with Carbon Relay as the company scales to address this unique opportunity.”

The application container market is anticipated to be worth $4.98 billion by 2023, and Carbon Relay isn’t the only company attacking it with gusto. There’s Twistlock, which has raised $63.1 million to date for its cloud-native cybersecurity platform for containers, and Containership, which operates a Kubernetes-based enterprise container-as-a-service platform. That’s not to mention DigitalOcean, which recently launched a Kubernetes service with compute servers, object storage, block storage, firewalls, and load balancers. Then there’s Rackspace, a Texas-based cloud computing company that launched Kubernetes with fully managed operations, and Mesosphere, which is developing a container-centric custom operating system for datacenters.