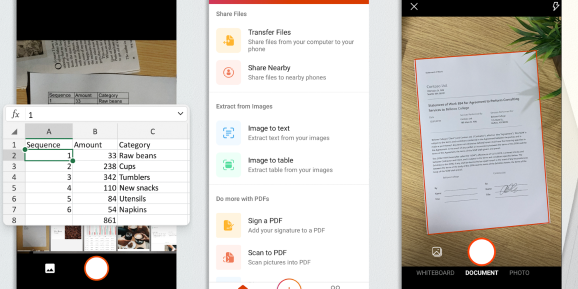 Microsoft this week launched an Office app that replaces Word, Excel, and PowerPoint on Android and iOS. Merging three apps into one, while adding more features, is quite the achievement. The new Office app is not just for consuming content and maybe a little light editing on the side, but actually creating content on the go. Most interestingly, a lot of these features fundamentally require AI and machine learning to achieve this new mobile productivity paradigm.

Microsoft has been adding AI-driven features to its once most profitable product line for years now — we did a recap of just a handful last year. This week’s Office launch, however, showed Microsoft’s embrace of AI as not merely augmenting what you can already do with the productivity suite, but added new use cases altogether. Most of the new features are not simply traditional desktop features ported to mobile. They are use cases that are better on mobile, or not even possible on desktop.

Office lets you take a picture of a document and turn it into a Word file. You can take a picture of a table and turn it into an Excel file. It takes a lot of smarts to understand not only what an image depicts, but also to then convert it into an editable format. You can pick a few pictures on your phone and have Office design a PowerPoint presentation for you. You can capture a whiteboard, document, or photo and let Office automatically digitally enhance it for you. These are use cases that you cannot reasonably do on your computer, nor would you necessarily even want to.

Even the AI-based recommended documents section in the Home screen leverages the machine learning in Microsoft Graph to serve up suggestions (caching them for faster and offline use). Timeliness and connectivity are even more important when we’re on the go.

In a briefing with me ahead of the news, Microsoft 365 general manager Rob Howard alluded to the company using “AI and new form factors and new software and new smarter experiences” to close the gap between desktop and mobile. The team wanted to get rid of the feeling that we often have when we’re trying to be productive on our phone. You know, when we conclude, “Screw it. I’ll just wait till I’m back at a computer.”

I followed up with him to pull a little more on this thread and ask if AI was playing as critical a role as I thought.

VentureBeat: Is AI making it possible for Microsoft to build productivity features on mobile that it simply couldn’t before?
Rob Howard: Absolutely. Carefully researched, user-focused design goes a long way on its own. Couple that with AI, and even tasks like data entry and slide design don’t have to wait until you’re back at a mouse and keyboard.

VentureBeat: Is AI helping Microsoft rethink Office for mobile?
Rob Howard: Yes. With the new Office app, we want to go beyond consuming content and help make people’s phones more productive. We use AI throughout the app to help people capture, create, and design content with the camera, their voice, and mobile-optimized UX.

I didn’t really expect Howard to say no to either question, but it’s still notable how unequivocally he agreed. If you look at the individual features that Microsoft added with this launch, it makes sense.

Until now, Microsoft has largely been porting over the desktop Office experience to mobile. Its focus was mainly on making it easier for you to access your documents on your phone. To be clear, Microsoft is still doing that. One of the three features coming to the Office app this spring, Excel Cards, is really just a new view to help you edit Excel files on your phone. But the other two, Word Dictation and Outline to PowerPoint, use AI to let you work on mobile like you’ve never done before — not on desktop, nor anywhere else.

The question you now have to ask yourself is: When does it makes sense to use Office on my phone and when should I default to Office on my computer? That was pretty obvious before, but now Microsoft is using AI to blur that line.