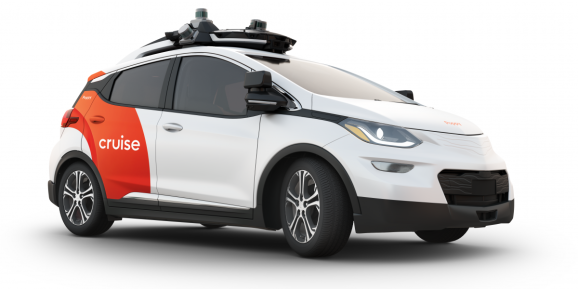 GM’s Cruise inched closer toward a commercial robo-taxi service this week with the acquisition of a permit from the California Public Utilities Commission (PUC). The procedural step is a part of the state’s ongoing Autonomous Vehicle Passenger Service pilot, and it’ll allow Cruise to provide passenger service in its autonomous Chevrolet Bolts with drivers behind the wheel.

TechCrunch first spotted the permit’s granting, which VentureBeat understands is in anticipation of service demos with partners, members of the media, and other “key people.” Currently, Cruise operates an employees-only ride-hailing program in San Francisco called Cruise Anywhere that allows those who make it beyond the waitlist to get around select areas of the city.

Cruise joins the exclusive list of companies allowed to participate in the PUC’s pilot, which includes Zoox, Alphabet’s Waymo, Pony.ai, Aurora, and AutoX. It’s separate and distinct from the California Department of Motor Vehicles self-driving vehicles program, under which 66 companies are permitted to test autonomous vehicles with safety drivers behind the wheel.

The development follows the postponement of plans for Cruise’s fully driverless taxi service, which the company previously anticipated would launch by 2020. In a blog post, CEO Dan Ammann said performance and safety concerns necessitated the delay, although pushback from U.S. regulators over requests to waive safety standards might have contributed. The company had hoped to have 2,500 such cars up and running as part of a controlled on-demand fleet in the coming months.

Following the unveiling of its next-generation Origin vehicle, Cruise revealed that it has roughly 1,800 employees working on its self-driving cars, up from 1,000 as of March 2019. Furthermore, it claims that there’s been 2.5 times increase in the utilization of its all-electric test vehicles between summer 2019 and early February — an improvement that’s expected to drive down costs.

Cruise is considered a pack leader in a global market that’s anticipated to hit revenue of $173.15 billion by 2023. Although it hasn’t yet launched a driverless taxi service (unlike competitors Waymo, Yandex, and Drive.ai) or sold cars to customers, it’s driven more miles than most — around 450,000 in California in 2018, according to a report it filed with the state’s Department of Motor Vehicles. That’s behind only Waymo, which drove 1.2 million miles that year.

Cruise is testing the cars in Scottsdale, Arizona and the metropolitan Detroit area, with the bulk of deployment concentrated in San Francisco. It’s scaled up rapidly, growing its starting fleet of 30 driverless vehicles to about 130 by June 2017. Cruise hasn’t disclosed the exact total publicly, but the company has 180 self-driving cars registered with California’s DMV, and three years ago, documents obtained by IEEE Spectrum suggested the company planned to deploy as many as 300 test cars around the country.

Building on the progress it’s made so far, Cruise earlier this year announced a partnership with DoorDash to pilot food and grocery delivery in San Francisco for select customers in 2020. (Ammann says that other pilots are ongoing and “under discussion.”) And it’s making progress toward its fourth-generation car, which features automatic doors, rear-seat airbags, and other redundant systems — and no steering wheel.

Growth certainly hasn’t slowed lately. In May 2018, Cruise announced that SoftBank’s Vision Fund would invest $2.25 billion in the company, along with another $1.1 billion from GM itself. And in October 2018, Honda pledged $750 million, to be followed by another $2 billion in the next 12 years. Today, Cruise has an estimated valuation of $14.6 billion, and the company recently expanded to a larger office in San Francisco and committed to opening an engineering hub in Seattle.