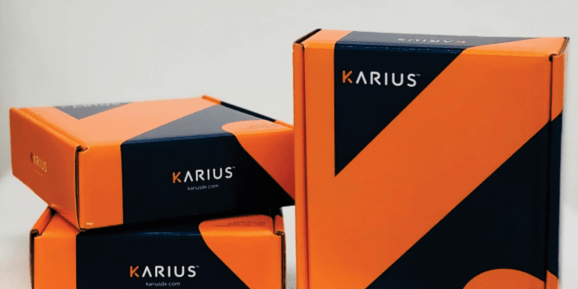 Approximately 9% of the U.S. population has been diagnosed with an infectious disease. Worldwide, these diseases are the second-leading cause of death after heart disease, and they’re responsible for more deaths annually than cancer.

Mickey Kertesz and Tim Blauwkamp — who worked together at Moleculo, a startup spun out of Stanford that focused on commercializing technology for generating long genome sequencing reads — wanted to address this problem. They cofounded Karius, a Redwood City, California-based company that uses a blood test to help clinicians make better treatment decisions. Karius claims to detect over 1,250 potential pathogens, including infections that can’t be identified using most conventional testing methods.

After a $59 million series A funding round in August 2017 and a $25 million debt financing round in November 2018, Karius today announced that it has secured $165 million in series B funding. Softbank’s Vision Fund 2 led the round, with participation from General Catalyst and HBM, as well as existing investors Khosla Ventures and LightSpeed Venture Partners.

“Infectious diseases are a leading cause of mortality globally and an enormous area of unmet need. Clinical results from our early access program demonstrate that the Karius test allows clinicians to diagnose infections more rapidly and accurately,” said CEO Kertesz in a statement. “We’ve enabled doctors to devise precise and effective treatment plans for patients and speed recovery times. We look forward to further broadening the availability of our technology in the coming months.”

In a nutshell, Karius’ solution — which costs around $2,000 per test — looks for microbial cell-free DNA (mcfDNA) circulating in the bloodstream from pathogens causing an infection. (Cell-free pathogen DNA can be found in blood regardless of the infection site.) That mcfDNA is extracted directly from the blood at Karius’ Redwood City facility using a next-generation sequencing machine and analyzed by machine learning algorithms that sort through tens of millions of data points in real time to identify a match.

Cell-free DNA fragments from the plasma specimen are extracted and converted to DNA sequencing libraries during processing, and the DNA is sequenced using Illumina-manufactured technology, with the absolute concentration of cfDNA calculated and compared with controls. This enables Karius to determine which microbes are contributing significant levels of cfDNA to the specimen.

Reporting consists of confirming several quality control indicators and, upon acceptable performance, faxing the result back to the ordering institution (typically the day after specimen receipt). Karius says it reports only the organisms from which cfDNA is detected in “statistically significant” amounts relative to controls.

Karius says its lab is certified by U.S. Clinical Laboratory Improvement Amendments, the federal regulatory standards that apply to all laboratory testing performed on humans, and that it’s accredited by the College of American Pathologists. While testing is available in all U.S. states, the company is licensed in California, Pennsylvania, Florida, Rhode Island, and Maryland. (Tests from New York must be ordered using the state’s restricted lab permit approval process.)

FierceBiotech notes that the liquid biopsy field, which is anticipated to reach $3.8 billion by 2023, has been gaining steam in recent years as a diagnostic for cancer. Startup company Epic Sciences is developing tests that predict drug response in cancer patients, while Illumina spinoff Grail is validating a screening procedure that aims to detect tumors early.