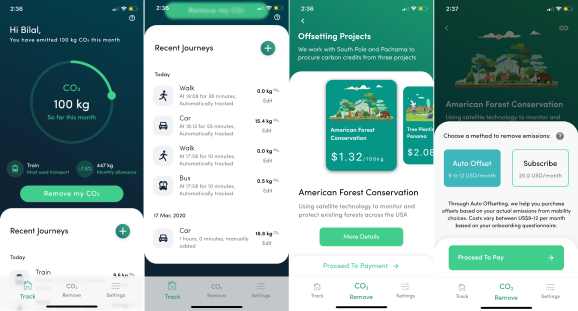 As countries struggle to contain the COVID-19 pandemic by forcing people into isolation, the reduced movement has resulted in fewer carbon emissions and a healthier planet — in the short term, at least. When China went into lockdown, NASA satellite images revealed a decline in pollution, a trend that first emerged near the source of the outbreak in Wuhan and spread across the whole country as more people were forced to stay at home. But as China has gradually resumed business over the past few weeks, pollution levels have risen accordingly.

It’s difficult to discuss climate change without addressing emissions caused by transportation — whether from planes, trains, or automobiles. But getting people to change their behavior is challenging, which is why one fledgling startup wants to make it easier for anyone concerned about the environment to make meaningful changes to their daily travel habits.

Founded in Singapore in 2019, Capture launched a mobile app in January that’s designed to help people and organizations track, reduce, and offset their carbon emissions. Available for Android and iOS, the app was recently updated with a new tracking feature that automatically detects which modes of transport an individual uses and — based on the duration of each trip segment — how much CO2 is emitted. More than that, the company encourages users to sign up for a monthly subscription for carbon offsetting projects, making it easier to directly counter emissions by supporting organizations working in tree planting, forest conservation, and clean energy. 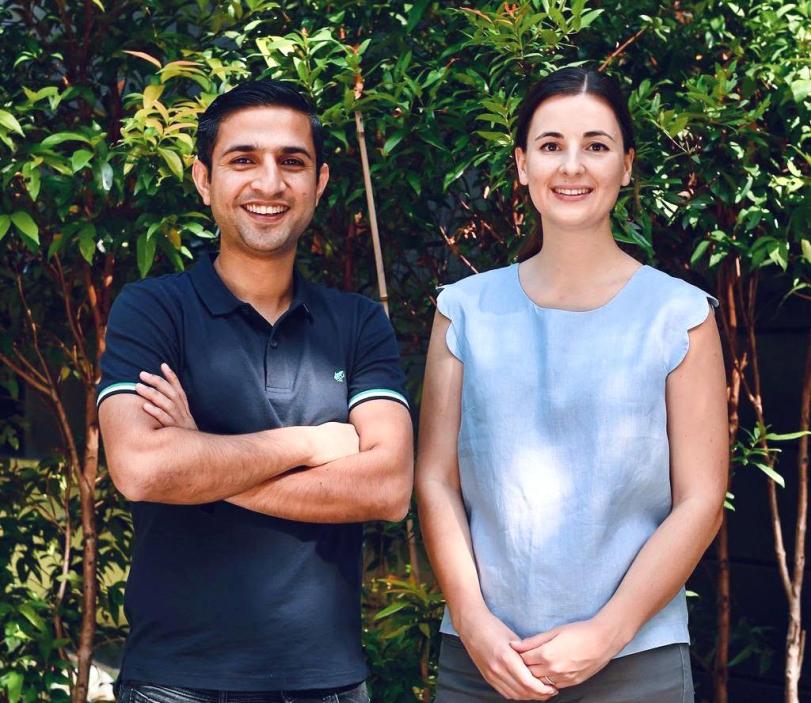 Just a few months after launch, the company’s numbers are modest — some two thousand activations and just over a dozen offsetting subscribers. But it’s still early days for an app that in its original form required users to manually enter each trip they made. While this is still an option for privacy-conscious users unwilling to have their movements tracked, the option of automatically logged journeys could certainly encourage uptake. The auto-tracking feature leverages GPS and some algorithmic smarts to figure out your mode of transport.

When you open Capture, it shows a top-line figure for your emissions in the current month, and you can easily see how you’ve traveled each day and the corresponding CO2 impact. 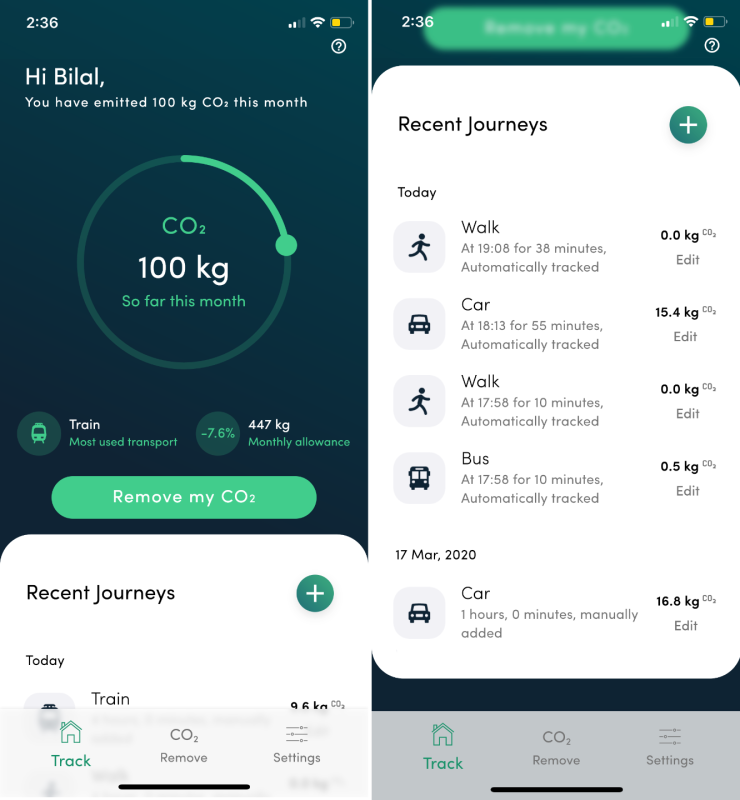 Above: Capture detects what modes of transport you have used and how much CO2 this was responsible for.

It’s worth noting that users can deactivate location tracking at any point and manually enter their transport usage. If the app fails to identify a vehicle type automatically, it will be listed as an “unidentified vehicle,” though users can manually edit this too.

There is also a “tracking accuracy” slider that gives the user more granular controls over resources consumed by the app. “Since we use a mix of sensor and GPS data to predict your mode of transport, there is a fine balance between keeping our background process active for better prediction and eating up power,” Capture’s chief technology officer Abdul Aziz said.

There are three modes — the “high accuracy” setting should provide the most accurate results, though it will result in greater battery consumption. As you would expect, the “low accuracy” mode will help conserve juice at the expense of accuracy.

“We believe the medium accuracy should be good enough on most devices,” Aziz added. 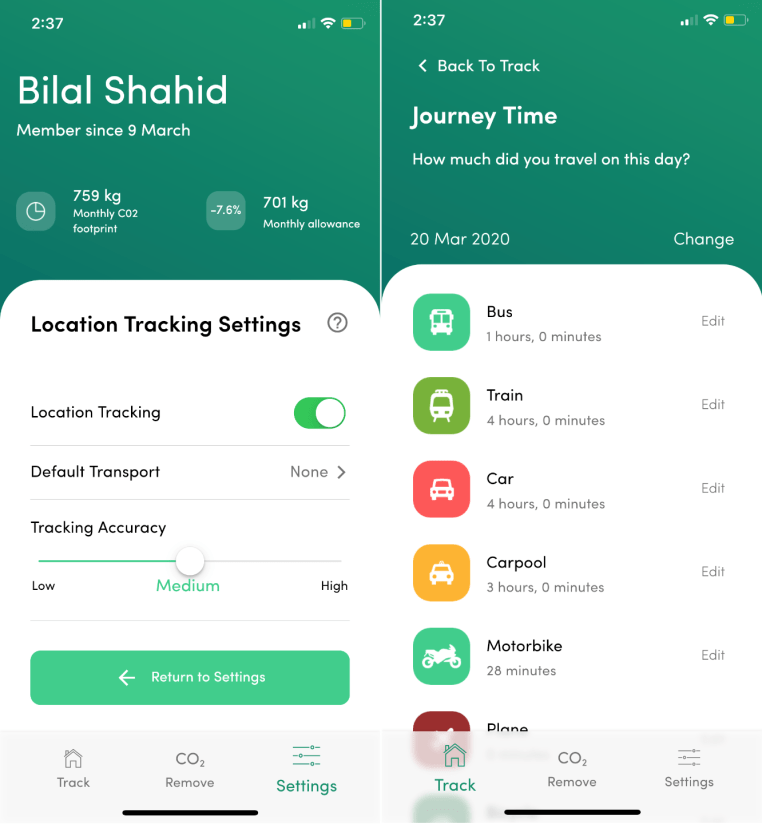 Above: Users can tweak their tracking settings in the Capture app

In terms of accuracy of its CO2 emission calculations, ​Capture estimates a user’s carbon footprint based on data from the Intergovernmental Panel on Climate Change (IPCC) and the United Nations Framework Convention on Climate Change (UNFCCC). In the future, it will seek to enhance accuracy by asking users to divulge more information, such as the make and model of their car.

But, of course, CO2 emissions are not solely a by-product of motorized transport. As such, Capture plans to eventually factor in all manner of lifestyle choices, including the food that we eat, products we buy, electricity we consume, and more so people will be able to glean a picture of their true carbon footprint.

“We have tracking apps for the things we care about — our health, our mind, our spending, our cycles — and we saw a clear need for an app to keep track of our carbon footprint too,” Stoker said. “That’s what we are building with Capture, an app that will empower people to understand, reduce, and offset CO2 emissions from daily life.” 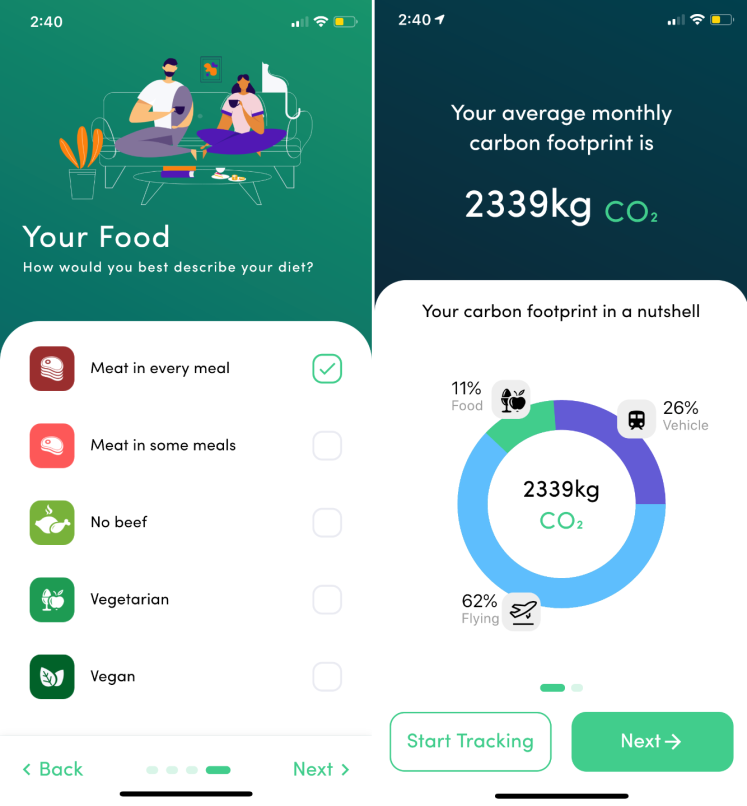 Above: Capture aims to map out your entire CO2 footprint

Although Capture positions itself as an ethical organization that works closely with nonprofits, it is very much a private profit-making company itself. Capture charges users a 10% transaction fee on top of their offsetting subscription, though this is included in the CO2 offsetting prices listed in the app. For example, if one of its offsetting partners charges $1.20 to offset 100kg of CO2, Capture would display the price in the app as $1.32.

Users have two options in terms of payment — they can choose to “auto-offset,” which means they pay an amount linked to their actual CO2 emissions, or they can elect to simply pay $20 per month. 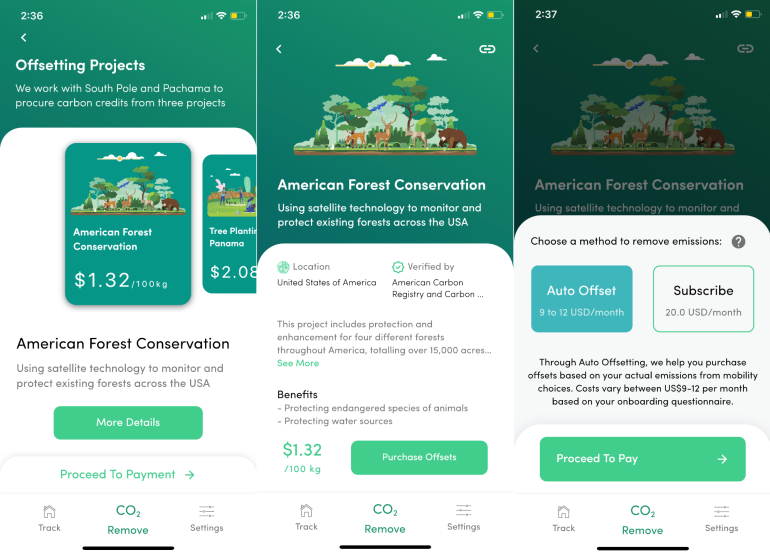 Capture is also working on a business product called Capture for Teams, which is designed to bolster companies’ green initiatives. Companies essentially license Capture for their workforce on a per-employee basis, with Capture providing analysis on CO2 emissions stemming from corporate mobility. It will also introduce “team sustainability challenges” for workers through the app. “You can think of the tool as an ‘upgrade’ to the free B2C version,” Stoker said. “Carbon offsetting can be arranged for the company, but that will be on more of a bespoke basis — for example, a company might ask us to find an offsetting project that’s geographically closer to their headquarters.”

As climate change awareness grows and people around the world experience the effects of global warming firsthand, businesses could face increasing pressure to curb their emissions. Efforts might include addressing how their employees commute to the office or to meetings — and Capture could see significant opportunities for growth. The company received a small tranche of preseed funding last year from a local startup generator called Antler, and it is currently in the process of raising its seed round.

Elsewhere, a consortium of “clean” investment firms this week penned an open letter in which they pledged to double down on investments to counter the impact of climate change — using the COVID-19 pandemic as a touch-point for their message.

“We are moving forward in full force to seek out and invest in promising organizations that can make a meaningful difference in creating a more sustainable planet and way of life,” they wrote. “Climate change is an existential threat to humanity — albeit a longer-term threat than this virus. As our society unites to overcome the coronavirus outbreak, we hope this unity will serve as a promising model — a model for how we can come together to build a safer and more sustainable world for generations.”

The letter aims to address a growing sense that the COVID-19 outbreak could lead investors — and people in general — to lose sight of the existential threat posed by climate change.

“We cannot ignore the truth that COVID-19 has created extraordinary, negative economic impact and disruption in the financial markets, which significantly impacts the clean energy investing climate,” Dan Goldman, cofounder and managing director at Clean Energy Ventures, told VentureBeat. “We are seeing solar, storage, and energy efficiency installers tasked with little or no work right now, and likewise, some construction crews on large projects have stopped working.”

Of course, many global industries are equally hard hit as they grind to a halt and countries implement lockdowns to slow the spread of COVID-19. But some fear the momentum that had been building around climate change awareness could be stymied as a long-term effect of the pandemic.

“We must be optimistic and recognize that in the coming months, this will end,” Goldman added. “Once that day arrives, we should assess and apply our lessons learned to address the climate crisis. We have seen a material reduction in emissions as economic activity has declined, and I believe that globally, governments and the private sector recognize the need to continue to mitigate emissions beyond the unintentional effects of this crisis.”

Carbon offsetting programs have long been criticized as methods for alleviating guilt rather than creating any meaningful impact in the fight against climate change. However, Capture is quick to stress that carbon offsetting is merely one component of its offering — it is chiefly a CO2 tracker and insight tool. Carbon offsetting is an optional extra for those looking to pay a voluntary tax for their lifestyle choices.

“We want to empower users to take action and live life in a ‘carbon conscious’ manner,” Stoker said. “This is why we built an app with three main functions, enabling people to first track CO2 emissions, then giving them tools and insights to reduce emissions before the option to ‘remove’ emissions via offsetting. We believe users are more likely to make lifestyle changes rather than offsetting alone if they are using Capture. [This is] mainly due to the fact that there are simple offsetting-only web-based solutions out there too. So users who find Capture are more often likely to be interested in tracking CO2 rather than offsetting alone.”

Capture is available to download now on Android and iOS.