Over the last few weeks, as the coronavirus has swept across the globe, we have all had to dramatically adjust our daily lives. Even those of us who have worked remotely before find this new level of detachment a significant adjustment.

During this time, I have also begun to wonder, when we emerge from this, which we will, if we will quickly snap back to normal or if this has the potential to embed new daily habits and ways of working permanently?

Some studies suggest it takes a minimum of 21 days to form a new habit and two months for a new behavior to become automatic. Unfortunately, I’m already nearing the 21-day mark and can easily expect myself and the rest of the world to be in a similar state by the two month mark. During this period, we can also expect a series of new regulations and policies to impact the way we go about our daily lives.

So what are the potential habits and regulations that will linger after we emerge from this unprecedented challenge?

Wearables have been growing in popularity over the past 5 years, driven mainly by Fitbit and Apple, however, a new crop are emerging as sensor technology continues to advance. Everything from smart clothing to the Oura Smart Ring.

The pandemic will potentially change this space forever. Steps are great, my sleeping patterns are interesting, but what if this data was collected at an aggregate level to predict similar events in the future?

Kinsa, maker of a smart thermometer, has already given a glimpse into the value of this data.  The snapshot below from Kinsa’s Health Weather Map, on March 22, 2020 shows what appears to be a significant abnormality in body temperature in New York and Florida, potentially warning of an emerging situation, such as a rise in people with the coronavirus. This kind of overview would allow affected regions to intervene early.

Today neither the Apple Watch nor the Fitbit measure body temperature, though I predict that will change and soon.

However, I believe the bigger opportunity, outside of wearables will be the in-home diagnostics market. There will be a bigger shift towards virtual doctors appointments as a result of this. In many areas of the U.S., and globally, this shift has happened very quickly. Dr. Christopher Crow recently explained to The Dallas Morning News, “We’re seeing a 180-degree change in how primary care medicine has been practiced in just a week or two. We’re doing 10,000, 12,000 virtual visits a day on our network, and that number could double by next week.” Crow is president of Catalyst Health Network, a clinically integrated network of primary care physicians.

However, virtual doctors appointments don’t completely replace the need for in-person visits when patients need to take the standard flu test, strep test, or have their vitals read. The potential for in-home diagnostics to become as standard as the telephone once was or the computer is now, is real and a tremendous new opportunity. The amount of new investment and focus on this space will expedite the progress.

Only 4% of Americans ordered groceries online prior to this crisis. But since stay-in-place orders went into effect, droves of shoppers are shifting their shopping online. This has meant a significant increase in demand for grocery retailers who relied on ecommerce as a small percentage of sales. Suddenly they’re dealing with many times their normal volume.

Here, habits are being formed on both sides. The consumer is learning that ordering online isn’t as challenging as once thought, and the retailer is learning to properly staff and fulfill these orders at scale.

If we look back to 2003, during the SARS epidemic in Asia, we can see that it was the catalyst behind the ecommerce boom in China. With fewer people flying to China to source materials, many turned to Alibaba, a small 4-year-old company that matched suppliers online. Likewise, JD.com saw its success after having to shutter many of its brick and mortar stores, launching ecommerce as a last-ditch effort.

Could COVID-19 do something similar to grocery ecommerce, or conversely add to the exponential growth of Amazon, which is already fulfilling some of the demand?

The biggest risks to the lasting growth of online grocery are the current wait times and out of stocks that all grocery retailers are dealing with. If this crisis ends over the next few weeks, I can imagine the overall effect may be a negative one, turning off more people than it converts. However, if the crisis does last longer, retailers will catch up to demand, the experience will improve, and shopping habits will be altered.

Local restaurants and cafes have felt an especially difficult burden during this time. Hours and staff have been cut. And although they’re launching new channels, such as delivery, this is a worst-case scenario for many. A remote workforce does not go out for lunch, and a populace urged (or forced) to self-isolate does not go out to dinner. Instead, we’re cooking our own meals.

In the Great Recession we saw a sudden drop in total out-of- home eating, but this was mostly a measure aimed at conserving income. 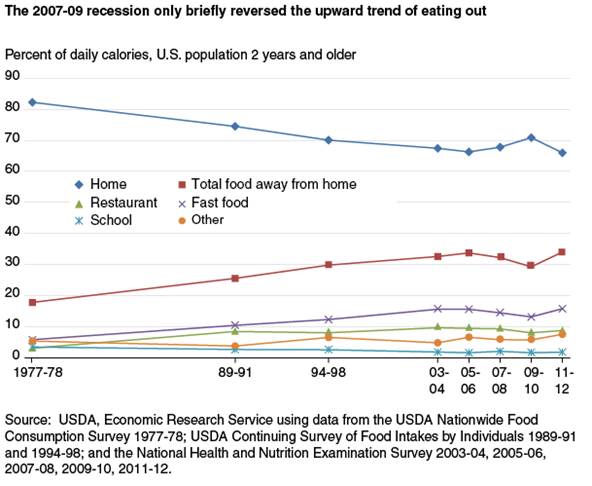 Our current challenge is much more complex and could be more prolonged. If a greater percentage of us realize that working from home is now an option after this crisis, what are the long-term effects?

There may also be much longer-term economic effects that prolong a return to normal. While the Great Recession was followed by a 10-year bull run, the pandemic could fundamentally change or eliminate certain industries.

Within just two weeks, I find myself much less wasteful. I am cooking and preparing for multiple meals at once and looking for inspiration to try something new. I sense I am not alone in this regard and perhaps a result of the coronavirus will be that a whole new generation learns or relearns how to cook.

Remote work has the potential to reshape our entire economy. While the geopolitical outcome will be a greater enforcement of borders, the economic outcome may be a removal of borders.

There is rarely a substitute for face-to-face, but technology has advanced to the point where it is not always needed. In fact, there are benefits to remote working that a few companies have known for a while and many more are now discovering.

One company, Stripe, a leader in the online payments space, announced last year, “We are establishing a fifth (development) hub that is less traditional but no less important: Remote. We are doing this to situate product development closer to our customers and improve our ability to tap the 99.74% of talented engineers living outside the metro areas of our first four hubs.”

Automattic, the maker of the WordPress platform has been remote since day one and has been a leader in the movement: “Our creed includes the statement, ‘I will communicate as much as possible, because it’s the oxygen of a distributed company’.”

The reality is that many companies have already integrated some aspects of remote work. At my own firm, for instance, we were already heavily distributed across the globe (30 countries) to be closer to our clients. However, we still tend to open formal offices in many of these locations. After this event, I wonder how many companies like ours will find that kind of office presence unnecessary.

The commercial real estate market may end up being one of the hardest hit. However, the positive implication is greater access to opportunity for a greater number of people and lifestyles.

It’s hard to think ahead to what may change in the future as many of us are dealing with very serious health and economic challenges right now. My hope is that we emerge better as a result of this experience and see a wave of new habits and innovations that improve everyone’s quality of life.

Kyle Fugere is Global Head of Ventures & Labs at Dunnhumby. He previously founded two companies in the B2B technology space, is a board observer for GrocerKey, Pulsate, and Askuity, and is a frequent speaker and writer on the subject of retail innovation.