Uber Eats is inviting customers in some locations to donate $2 to support their favorite local restaurants. A contribution button now appears at checkout, in addition to any tip the customer chooses to give their delivery driver.

The announcement comes hot on the heels of a controversial crowdfunding initiative Yelp and GoFundMe launched last week. The pair partnered to automatically create fundraisers for business owners listed on Yelp — without their permission. Yelp backtracked after some businesses complained about being opted in without consent, and the initiative has been paused until it can be reconfigured. While the new Uber Eats fundraising tool has a similar goal, the way it has been integrated into the checkout process inside the Uber Eats app makes it less likely to receive negative feedback.

Once the user has chosen their food, they can tick a box to add an extra $2 to their bill, the entirety of which goes to the restaurant. If the user doesn’t tick the box at the top, they are prompted again once they hit the “place order” button. This default donation figure could change as Uber iterates the feature during the initial test phase. 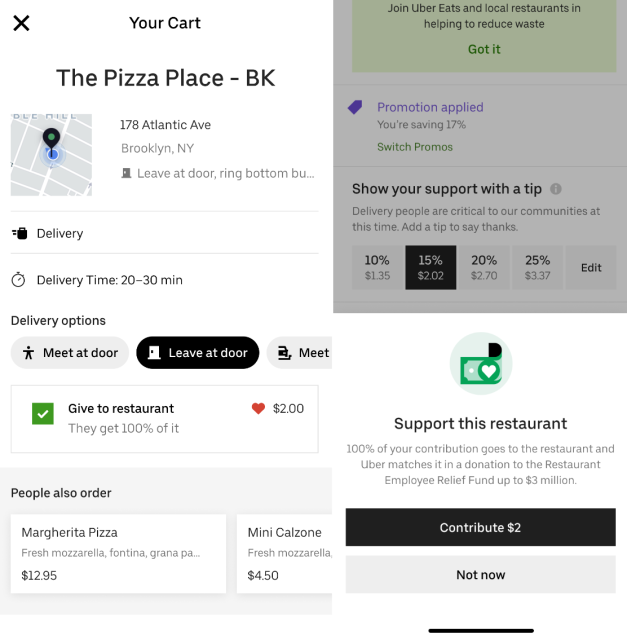 The donate button will only be available to Uber Eats customers in New York initially, though there are plans to expand it to other cities across the U.S. and to other countries in the coming weeks.

This feature also feeds into a broader initiative, as Uber recently became a founding partner of the National Restaurant Association Education Foundation’s (NRAEF) Restaurant Employee Relief Fund (RERF). The organization is setting out to give financial aid, in the form of $500 grants, to workers across the restaurant industry who have been impacted by the COVID-19 crisis. Uber said it has donated $2 million to the fund and committed to matching all contributions made through the Uber Eats app up to an additional $3 million.