In the scramble for reliable information about COVID-19, a new report found that famous people with large social media followings are playing a critical role in the dissemination of misinformation.

According to a report by the Reuters Institute for the Study of Journalism and the Oxford Internet Institute, high-level politicians, celebrities, and prominent public figures generated 69% of the social media engagement around coronavirus misinformation, even though they accounted for only 20% of the misleading posts in a sample. The authors of the report chalk this up to the individuals’ large followings. 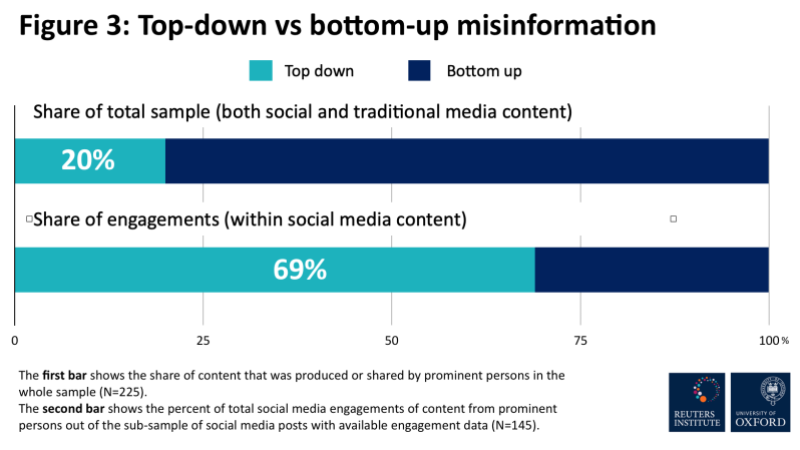 As the COVID-19 pandemic has spread, disinformation, misinformation, and scams have grown apace. In fact, the World Health Organization has labeled this an “infodemic.”

In tracing the pathways of misinformation, the report did not specifically name the authors of misleading posts, but rather described them as “high-level elected officials, celebrities, and other prominent public figures (including a U.S.-based technology entrepreneur).” Collectively, this group was labeled “top down.”

The authors relied on a data set created by an international consortium of fact-checkers called First Draft. The report said coronavirus misinformation has been straining the resources of fact-checkers, with the number of English-language fact-checks increasing 900% between January and March this year.

For the study, the researchers examined 225 pieces of information that First Draft labeled false or misleading. Of this sample, 59% represented some form of “reconfiguration, where existing and often true information is spun, twisted, recontextualized, or reworked.” A smaller group (38%) was labeled “completely fabricated.”

The role larger personalities play in spreading information points to the need to closely monitor their accounts and respond quickly to limit the diffusion of false or misleading claims.

At the same time, a much larger number of posts generated by smaller accounts represents 31% of the social media engagement around misinformation. This poses a separate problem for fact-checkers because each account has a smaller reach, but together they have a considerable impact.

The report didn’t find much evidence that deepfakes or other AI-driven tools are playing a big role in COVID-19 misinformation at the moment.