Molekule has launched a new version of its home air purifier, dubbed the Molekule Air Mini+, which senses the quality of air in your home and automatically turns on the filter as needed.

San Francisco-based Molekule argues that its air filter is based on a transformative technology that enables it to suck a wide range of pollutants out of the air and destroy them. Targets include viruses, mold, and bacteria, and it has some third-party validation from researchers. It’s also arriving at a time when people really care about the quality of the air they breathe.

Back in February, the company raised $58 million as investors and customers saw its usefulness in mitigating pollution from wildfires raging around the world.

The Air Mini+ includes Molekule’s patented Photo Electrochemical Oxidation (PECO) technology to destroy pollutants, as used in its earlier Molekule and Molekule Air Mini filters. But the new one has sensors that can pick up the presence of particulate matter, and it kicks into a high-gear Auto Protect Mode when it senses them. 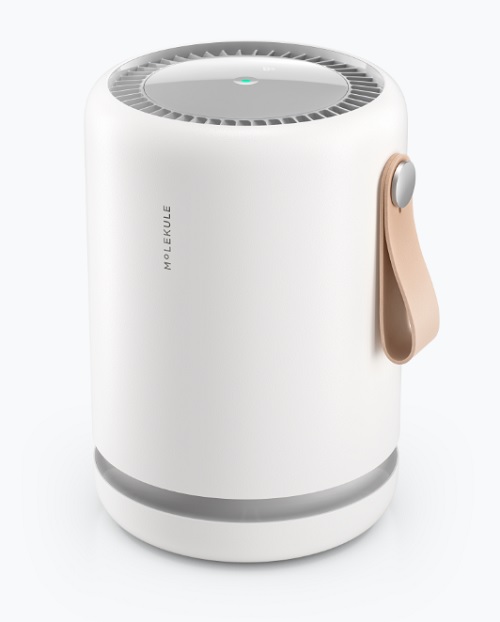 Above: Molekule Air Mini+ has a filter that destroys pollutants.

I have used both the Air Mini and the Air Mini+, and I’ve been very interested in getting feedback from the sensors. It still isn’t that granular, but the new product has the best sensor technology the company could find, said Molekule CEO Dilip Goswami in an interview with VentureBeat. He said Molekule’s PECO technology is proven to destroy pollutants 1,000 times smaller than HEPA standards test for. The idea is to destroy the pollutants, rather than just collect them on a filter.

“We’re really excited to release the Air Mini+, which has the same PECO technology as the Air Mini and the Air models,” Goswami said. “The addition is the Auto Protect Mode and the ability to sense particulates in the air. You’ve asked about this before, about adding sensors. We agree that’s a really important thing to add to the devices. In the past, we’ve been limited by the efficacy of those sensors.”

With at least one pollutant category, the sensors in the Mini+ can now accurately detect the pollutant and then automatically start the fans to get the filter going, he said.

As far as I can tell, the Molekule products do their job of clearing the air of allergens and other particles, but it’s hard to notice that you’re not sneezing as much as you normally might. This version provides some cues to the work it’s doing, with lights on top that give you an idea of the condition of the air in your room.

It has green for clean, yellow for mixed, and red for bad air. The latter has only shown up after we cook something on the stove. If you see purple, run for the hills, as that means there’s an unhealthy concentration of particles in the air. But Goswami said the team decided not to make the measurements more granular because it didn’t want to suggest that the sensors are that precise.

“If you want an exact number, there’s still some challenges there,” Goswami said. “We’re trying to convey that what we are relating is something you can rely on. This is a great first step for us to help our customers to understand what is going on with the air. There’s certainly more to go, as there are a lot of different pollutants in the air.”

The Air Mini+ has variable fan speeds, and you can set it to a high speed or let it set its own speed. The filter comes with a mobile app that connects to the filter to let you adjust the controls. 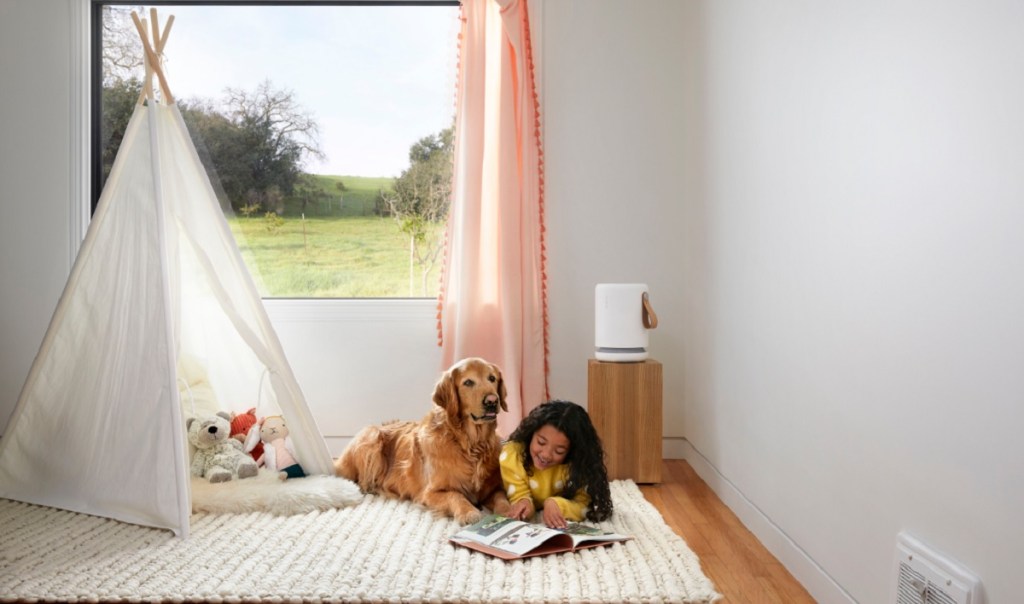 Above: You can clean a 250-square feet room with a Molekule Air Mini+.

In automatic mode, the filter adjusts to the number of particles in the air — like pollen and dust — while also capturing and destroying other indoor air pollutants, including VOCs, mold, bacteria, and viruses.

The Environmental Protection Agency estimates that indoor air can be 2-5 times more polluted than outdoor air, said Jaya Rao, cofounder and co-CEO of Molekule, in a statement. So the company wanted to build a product that can give people insight into the air they’re breathing.

To set up the filter, I had to twist the cylinder counterclockwise to pull off the top. Inside it was a packaged air filter. I removed the plastic and put the cylinder lid back on. Then I set up the device in my garage office, which doesn’t always have the freshest air. I put it in the middle of the room, but probably not as high off the ground as suggested. I looked around on the device for an on switch but didn’t find it. It took a while for me to figure out the small indentation on the very top of the device was the on switch.

Easy to use app 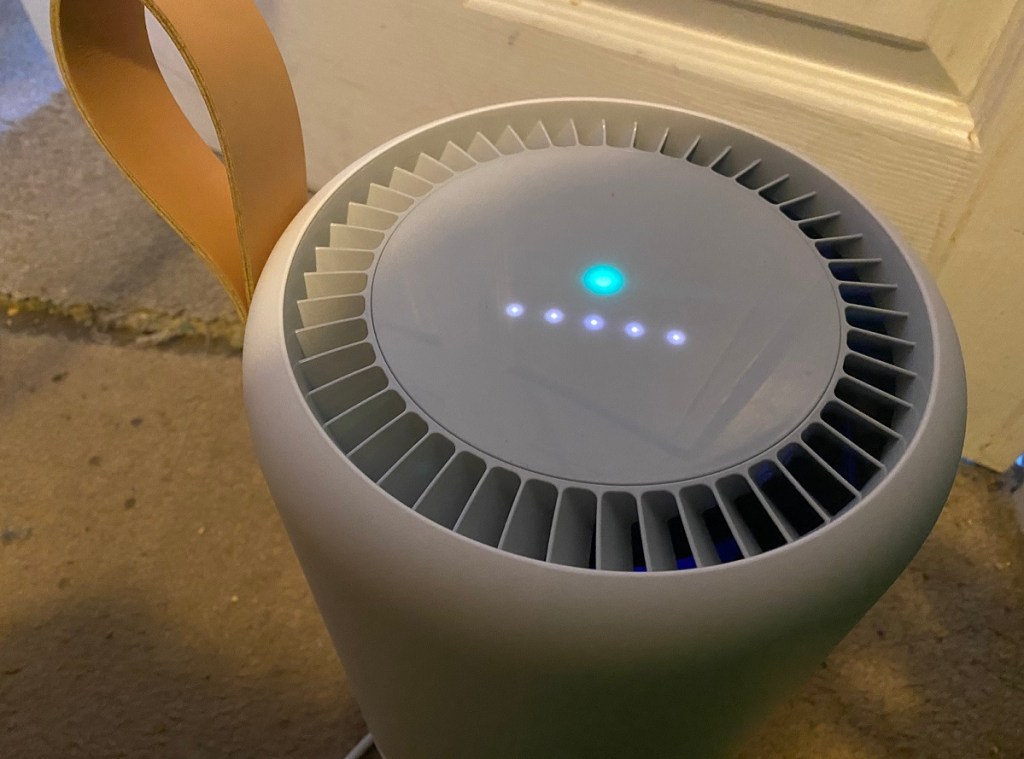 Above: Here’s the Molekule Air Mini+ filter in my home.

I downloaded the Molekule app and paired it with my iOS device (you can also use Android). It didn’t find my device at first, but it eventually worked. You have to have Wi-Fi working in your home to use the app, which can also tell you if the air in your room is good.

“You can see what the particulate level is in your air,” Goswami said. “It’s another feedback mechanism, as we heard our customers who wanted to know what was in the air. We also wanted to respond to air changes quickly.”

As customers continue to learn about the dangers of indoor air pollution, they have asked Molekule to include sensor technology that better enables them to understand the makeup of their indoor air. The particle sensor and Auto Protect Mode in Air Mini+ were two of the most frequently requested features. I know because I was one of those who kept asking for a real dashboard.

Goswami acknowledges that this kind of dashboard isn’t available yet. But the company is always working to find reliable and affordable sensors to put in its machines.

One recent study, conducted by the Aerosol Research and Engineering Lab, demonstrated the ability of PECO technology to significantly reduce proxies of the influenza virus. These findings further substantiate the growing body of third-party research a multitude of laboratories have conducted on Molekule’s capabilities.

Air Mini+ stands 12 inches high, is 8.26 inches in diameter, and weighs just over seven pounds. The app-enabled device has five fan speeds and is ideal for rooms 250 square feet in size. The device starts at $500 and is available for purchase on Molekule.com and Amazon.