In a new preprint study published this week on Arxiv.org, researchers at the University of Cambridge, University College London, Ecole de Guerre Economique in Paris, the University of Science and Technology in Hong Kong, and The Family Federation of Finland propose two AI models designed to predict the impact of mask-wearing on the spread of the coronavirus that causes COVID-19. The best-performing model suggests that donning masks has a “significant impact” when at least 80% of a population participates, claim the coauthors, versus a “minimal impact” when 50% or fewer people choose to wear face masks. Interactive visualizations of one of the models is available online.

The paper’s results are in line with guidance from the U.S. Centers for Disease Control and Prevention and the World Health Organization, both of which recommend wearing masks in public. Transmission of the coronavirus occurs primarily through respiratory droplets, which can land in other people’s mouths or noses when those infected cough or sneeze. Masks are thought to reduce transmission by capturing larger droplets, although preliminary studies indicate some masks — like surgical masks and respirators — are more effective than others.

The first of the two aforementioned models attempts to forecast the impact of masking compared with other interventions, chiefly lockdowns and physical distancing. It divides a population into categories representing different states of disease progression — susceptible, exposed, infectious, and recovered — and uses what’s called a stochastic dynamical network to closely mimic contact between people in society. A graph consisting of nodes and edges represents individuals (nodes) and their interactions (edges), with adjacent nodes forming a single person’s “close contact” network. Contacts made from anywhere beyond this network symbolize global contacts among the broader population. 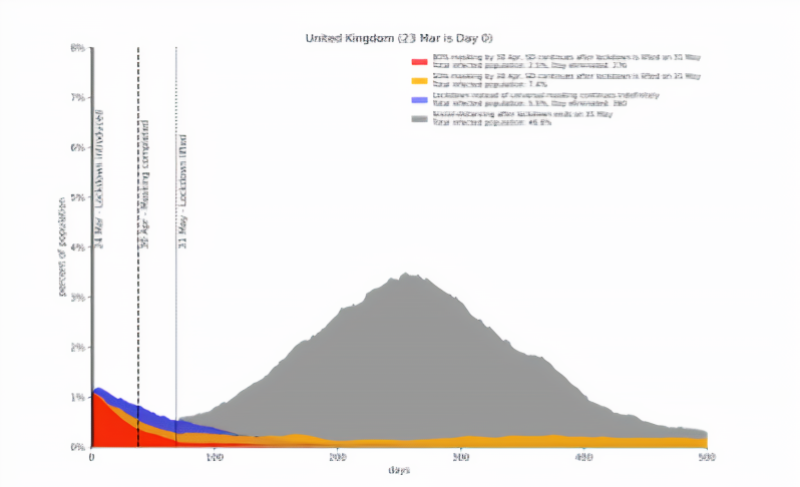 By varying parameters affecting levels of interaction and the mean number of close contacts, the researchers were able to use the model to measure various degrees of social distancing and lockdown measures. For the sake of the study, they began with an initial infected population of 1% (67,000) and fitted it to the current timeline in many Western countries, with a lockdown imposed March 24 and planned to be lifted on May 31. They then simulated 500 days from day 0 (March 23) into the future — a time period of around 17 months.

The simulation shows that masking at 80% adoption flattens the infection curve “significantly more” than maintaining a lockdown (resulting in 60,000 deaths compared with 180,000 deaths), reports the team. It also implies that masking at 50% adoption isn’t sufficient to prevent the continued spread (240,000 deaths), and that replacing strict lockdowns with social distancing on May 31 without masking would result in unchecked spread.

The second of the researchers’ models employs an agent-based technique where individual software agents “wear” masks with different assigned properties (i.e., cloth or surgical). In a population of 200, again categorized by progression — susceptible, exposed, infectious, and recovered — with an assumed 1% infection rate, the researchers simulated 300 days from the onset of the outbreak, varying the degree to which people wore masks and mask characteristics like transmission (exhaling) and absorption (inhaling).

Results from the agent-based simulation indicate that masking can reduce virus spread if adopted sufficiently early, even if the masks are nonmedical or homemade, according to the researchers. One hundred percent mask adoption at the onset of the outbreak results in a “dramatic” decrease in the number of infections, while 90% adoption has “good chances” of suppression after 50 days. 50% adoption was found to be an insufficient level, meanwhile, and waiting until day 75 to institute a mask policy decreased the degree to which infection could be suppressed.

Both of the researchers’ models suggest that if four out of five people started wearing cloth masks in public before lockdowns lift, the number of new COVID-19 cases could decline enough to exit the lockdowns and avoid a second wave of infections. On the other hand, if every second person started wearing a mask, infection rates would decline substantially but likely not by enough to prevent the second wave.

“Without masking, but even with continued social distancing in place once the lockdown is lifted, the infection rate will increase and almost half of the population will become affected. This scenario would potentially lead to over a million deaths in a population the size of the U.K.,” wrote the researchers. “Without masking, lifting lockdown after nine weeks while keeping social distancing measures will risk a major second wave of the epidemic in 4-5 months’ time … A continued lockdown [without masking] does eventually result in bringing the disease under control … [but] the economic and social costs of a ‘full body lockdown’ will be enormous, which strongly supports finding an alternative solution.”