While 46% of more than 7,000 companies are still hiring during the pandemic, 21% are laying off workers and 32% have frozen hiring, according to a new report on crowdsourced data from Candor, which helps tech workers negotiate salaries. Indeed.com has also come up with new data on job postings.

These reports rely on what employees are reporting about hiring, layoffs, and job freezes, and so they offer a real-time look at the impact of the coronavirus on the economy.

Overall, 42.5% of companies in business-to-consumer (B2C) markets are laying off people, and only 36.6% of companies hiring are B2C. Among industries that have frozen hiring are marketing, advertising, public relations, education, ecommerce, and marketplaces. 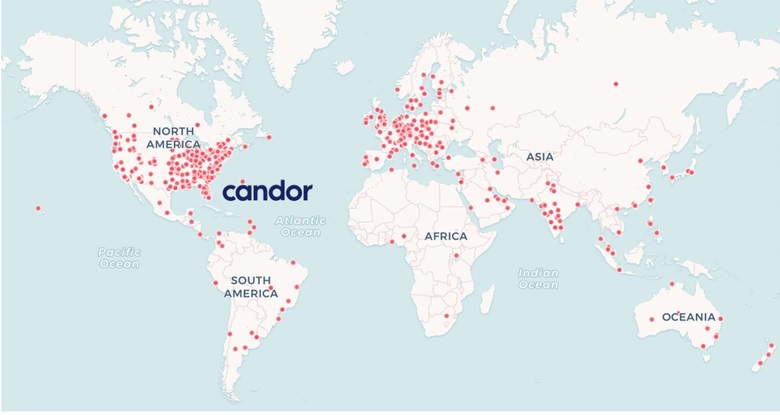 The Bengaluru region of India has had strong job growth, and 48.1% of companies in the San Francisco Bay Area are still hiring, even as the cities have transitioned to remote work. About one in five companies in Silicon Valley is laying off workers. San Diego, California; Cambridge, Massachusetts; and Paris, France have more companies hiring than instituting freezes or layoffs.

The slowdown has hit worldwide. New Zealand has been praised for its COVID-19 response and relatively few cases, but job postings are dramatically down in the country. On Indeed.com, Australia, the U.K., Canada, and Ireland have all seen postings drop more than 40% as of April 10. 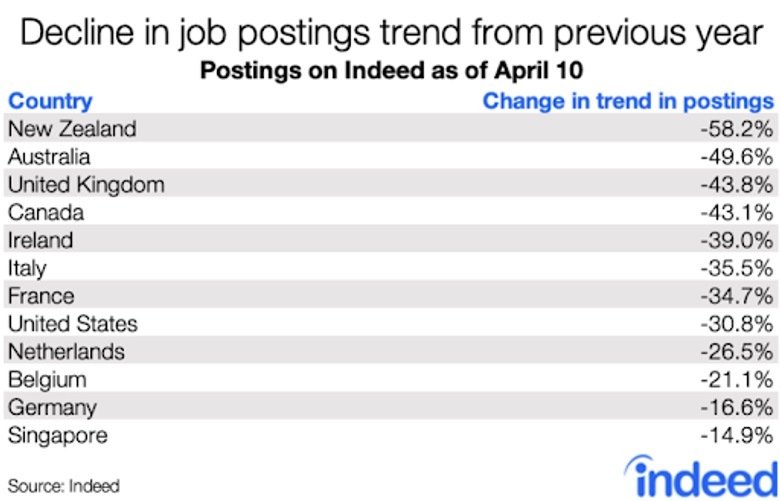 Above: Job posting declines by country.

More than 60% of the companies hiring have 10 or fewer employees, and more than 50% of those hiring have 50 people or fewer on staff.

Larger private companies are using the opportunity to “rightsize,” or reduce burn rates and extend runway. 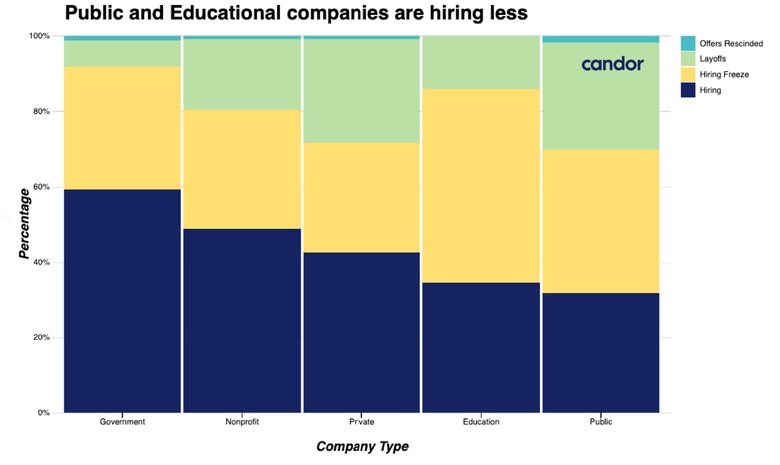 Above: Public and educational companies are hiring less now.

As mentioned, the data shows that smaller and younger companies are hiring more, while public and educational companies are hiring less. So if you’re looking for a job, your best bet is a small startup that may not be able to offer a large salary but is seeking talent to take on incumbents. Government jobs are also expanding now.

For job seekers, Candor said, “There’s no denying that economies across the world are being turned upside down — and this is undeniably affecting the state of hiring. There is no industry or location untouched by the pandemic, so job seekers have to adapt to the changing times.”

Candor added, “Consider who’s hiring and who’s not, and target your efforts there. Look for industries that have long-term growth potential beyond the pandemic. A company selling face masks might do well in the short term, but companies that are invested in long-term visions with a skew toward tech, health care, or education will be the safest bet.”